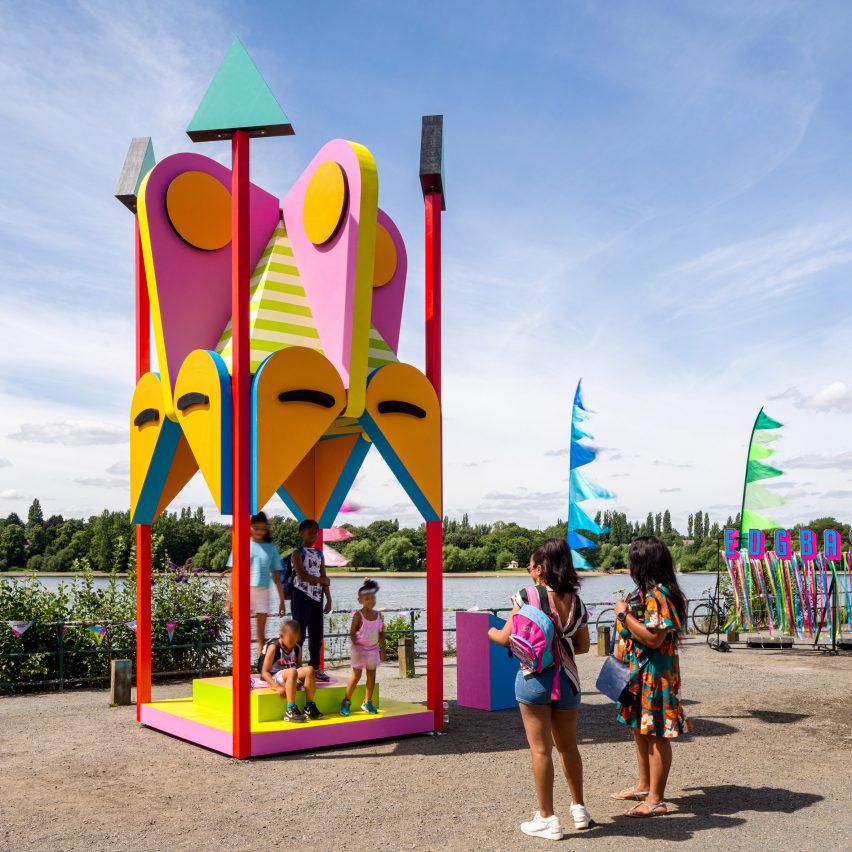 Designer Adam Nathaniel Furman has created a colourful structure called Babs Baldachino to coincide with the Commonwealth Games in Birmingham.

Created as a monument to LGBTQ+ people in the city, Babs Baldachino was made for the city’s contemporary arts festival Fierce Festival and designed as a “queer monument to sit at the Edgbaston Reservoir,” the festival said.

Furman designed the monument to provide “moments of pleasure” for visitors and to promote the presence of queer people involved in activities relating to the Commonwealth Games sports event, which held its closing ceremony on 8 August.

It takes part of its name from the local term of affection, bab.

“Babs Baldachino is the creation of a little temple to the queer spirit of the West Midlands, a small but loud offering to the camp brilliance that is always so present in the city, one of the great anchors of queer culture in Britain,” Furman told Dezeen.

“Obviously there is also the fact that as an international event, it is more important in these times than it has ever been to show queer pride, to show how we are a brilliant and valued part of society.”

The structure comprises a stepped floor that visitors can use as seating and a striped pyramid roof with rounded planes extending perpendicularly from each side.

Red columns on the corners of the monument are topped with blue triangles. 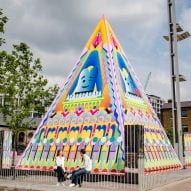 “It stands in the park in an easily recognisable way, similar to the Victorian bandstands that we all love in so many of our parks, only it has a more voluminous presence through the platonic simplicity of its forms and the bright contrasting colours of its decorative scheme, meaning that despite its small size it is visible from far away,” explained Furman.

Furman designed the monument to be easily disassembled, transported and reassembled so it can be used after the Commonwealth Games as a continuing part of Fierce Festival.

“The wider Healing Gardens of Bab programme takes a deep look at our homophobic colonial histories, but with this piece we wanted something that could subtly pique people’s interest who might not know anything about these histories,” said Aaron Wright, artistic director at Fierce Festival.

“We really wanted to commission an artwork that we could take to suburbs of Birmingham to act as a queer beacon, in places that might not be thought of as queer,” Wright told Dezeen.

Other projects designed by Furman include a pyramid structure at Kings Cross that was unveiled during LGBTQ+ Pride month and an installation created in collaboration with Australian practice Sibling Architecture that celebrates queer aesthetics.

The photography is by Gareth Gardner.