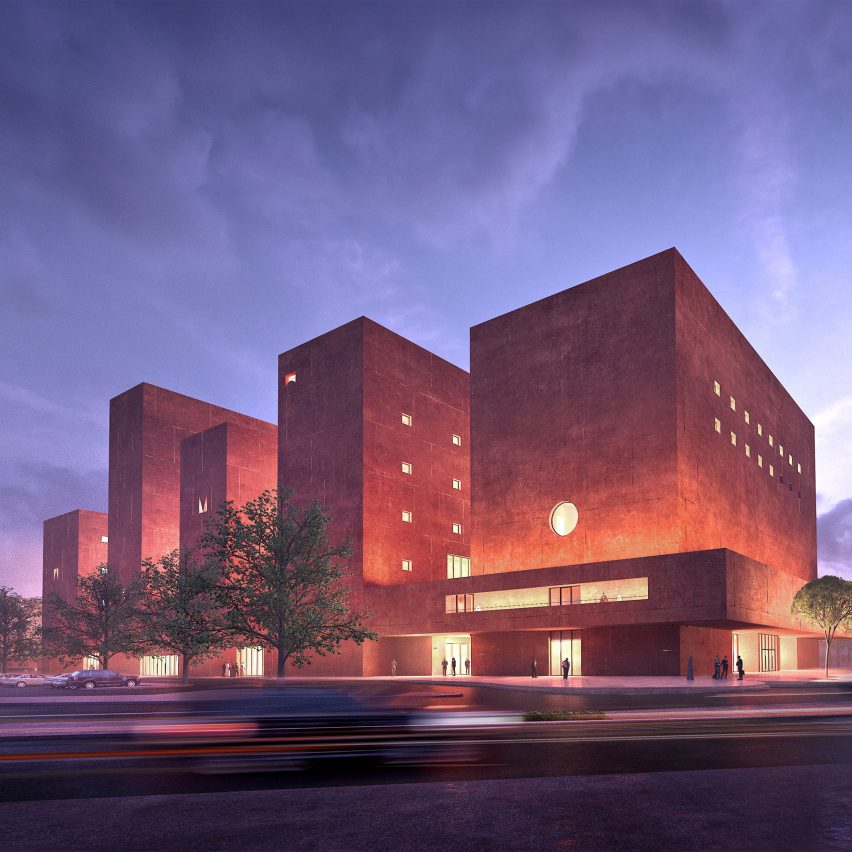 Large courtyards will sit between the five high-rise blocks that define The Africa Institute campus, which Adjaye Associates is developing in downtown Sharjah, United Arab Emirates.

Slated for completion in 2023, the red-hued concrete campus in the Al Mankah neighbourhood will support The Africa Institute‘s study and documentation of the African diaspora in the Arab world.

Adjaye Associates‘ design for the 31,882-square-metre campus comprises a boundary of four solid walls, across which four of the monolithic high-rise blocks will be elevated.

The fifth and southernmost block will incorporate the existing home of The Africa Institute, Africa Hall, which is set to be renovated as part of the project.

Once complete, the campus will be used to support the organisation’s various events, as well as its new higher education programme due to roll out in 2023.

Entrances will be incorporated into each of its four facades in a bid to help connect The Africa Institute to the existing walkways and institutions around the site.

“I am deeply humbled for the opportunity to design The Africa Institute in Sharjah, a project which introduces an entirely new type of thinking and mission into the global academic arena,” said Adjaye Associates’ founder David Adjaye.

“I envision the new campus as a springboard for the concretization of the incredible history of Africa, the African diaspora, and the Arab world.”

A red-hued concrete was chosen for the campus in an effort to “enhance the desert typology”, Adjaye Associates said.

The studio also claimed that the concrete used will be low carbon and help to naturally cool the building through thermal mass and by limiting sun exposure.

Natural cooling for the campus will also be provided through large overhangs around the site and by the open-air courtyards, which will be filled with native plants and water features.

Inside, the campus will be fitted out with a variety of spaces to cater to classes and seminars of different sizes.

There will also be a research library and climatised archive, a flexible auditorium and performance space, alongside a restaurant, cafe and bookstore.

The Africa Institute is currently also commissioning artists to create installations to be dotted throughout the new building.

Adjaye Associates was founded by British-Ghanian architect Adjaye, who was the recipient of the RIBA Gold Medal for 2021, in 2000.

Elsewhere in the UAE, the studio is currently also developing The Abrahamic Family House, an interfaith complex in Abu Dhabi that will comprise a church, mosque and synagogue.

The visuals are courtesy of Adjaye Associates.