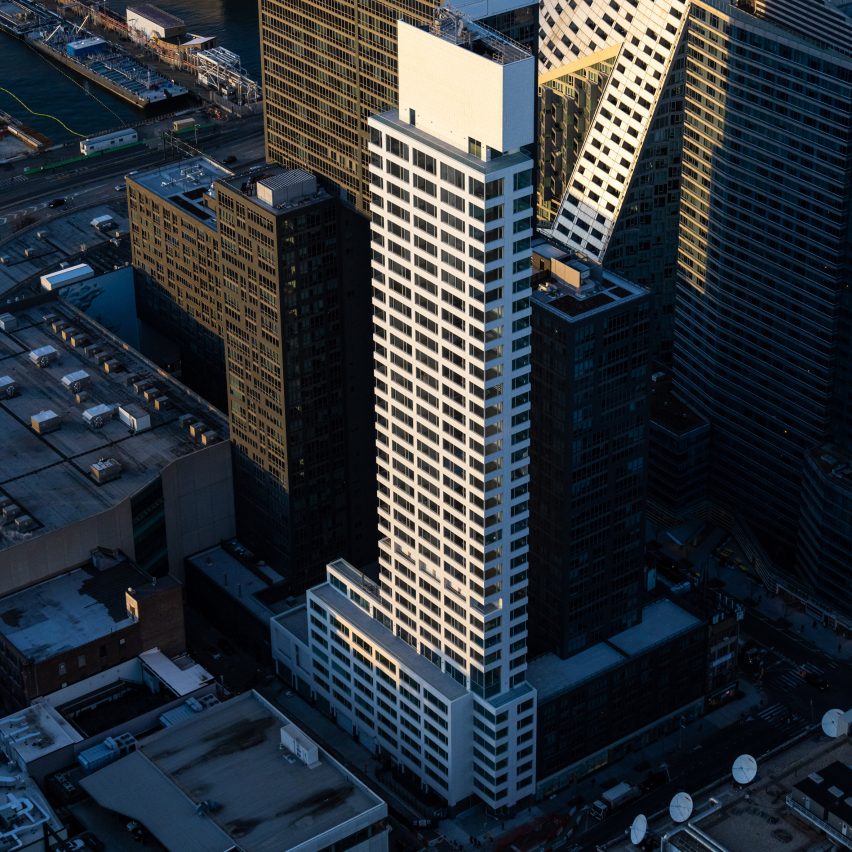 Portuguese architect Álvaro Siza has revealed the 611 West 56th Street skyscraper in Manhattan, which is the Pritzker Architecture Prize-winning architect’s first building in the United States.

In line with the 88-year-old architect’s usual style, the building is clad entirely in Perla Bianca limestone.

The slender tower rises from a thicker base with a 53-foot (16-metre) windowless block, crowning the building, giving it a form that Siza likened to that of a giraffe.

The 37-storey building has 77 luxury condominiums with residences ranging from one to four bedrooms including the larger “maisonettes” and a grand penthouse.

The duplex maisonettes and the penthouse have access to private terraces.

The limestone facade was designed to create a contrast with other towers in the area which have dark or mostly glass facades.

Over-sized windows punctuate the stark white facade and provide views of Manhattan and west over the Hudson River.

Where the building moves from the thicker base to the more slender tower extension there is an outdoor garden. Residents of the tower will have access to an exercise centre and entertainment rooms, as well as a community room for events and hosting.

The interiors of the tower were designed by New York studio Gabellini Sheppard Associates, which is run by Michael Gabellini and Kimberly Sheppard.

In the penthouse, white walls match the exterior of the building while hardwood flooring, Italian walnut cabinetry, Grigio Nicola marble countertops and upscale furnishings add to the sense of luxury. 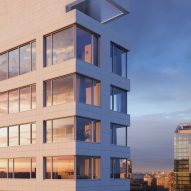 "I didn’t expect to build in Manhattan" says Álvaro Siza

The building, which was developed by real estate firms Sumaida + Khurana and LENY,  joins a group of buildings on what has become known as “architects’ row”. Other recent constructions in this area include BIG’s pyramidal West 57th, known as “courtscraper”.

611 West 56th is among a number of high-profile projects recently completed in upper Manhattan including the world’s skinniest skyscraper by SHoP Architects.

Siza, who is based in Porto, won the Pritzker Architecture Prize in 1992 and has designed buildings globally including a hilltop pavilion built in South Korea in collaboration with Carlos Castanheira Architects as well as a travertine housing complex in Italy.

In a 2019 interview, Siza told Dezeen that he never expected to build in Manhattan and that the commission came as a surprise to him.

The photography is by Evan Joseph.