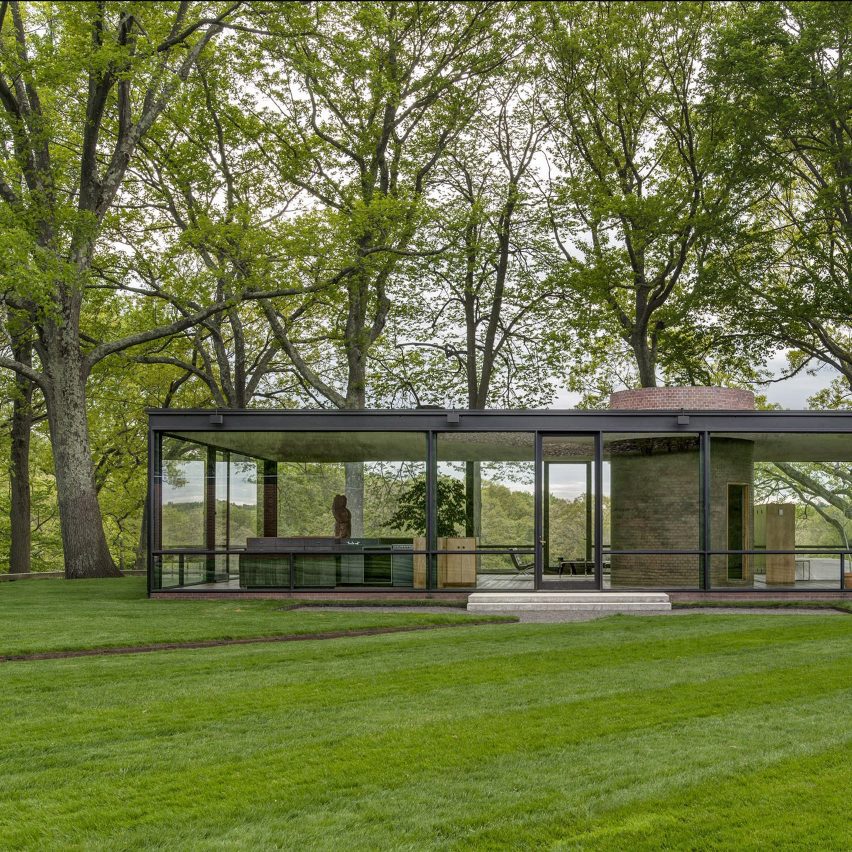 Philip Johnson’s Glass House and a Frank Lloyd Wright home are among the buildings that leading American architects have selected as the USA‘s most significant pieces of architecture of all time.

Dezeen asked 10 American architects, including American Institute of Architects (AIA) president Kimberly Dowdell and veteran New York architect Robert AM Stern, to name the US building project that is most important to them and the history of America’s architecture.

Among their choices are Philip Johnson’s modernist Glass House, an airport designed by Eero Saarinen and homes by the godfather of American architecture, Frank Lloyd Wright.

“It exemplified the beginning of an exceptional and creative collaboration between architects (Natalie de Blois and Gordon Bunshaft), artist (Isaumi Noguchi), and client (Lever Brothers) – an act of corporate responsibility.

“Seventy years later and under new stewardship, the building is being transformed and will be an icon of responsible, forward-thinking repositioning and adaptive reuse, responding to the imperatives of climate change and the evolving culture of work.”

“Small in scale, Glass House has had an enormous impact on my thinking and architectural approach.

“A distillation of modernism, the design is singular in purpose – a living room – with a limited materials palette: glass, brick, steel. Even as he stripped away elements, Johnson’s detailing is exquisite.

“Glass House reminds us to consider the singular purpose of each project, and strive to develop that.”

“The Passenger Terminal Building at Dulles International Airport designed by Eero Saarinen remains a steadfast inspiration for my work on airports.

“It beautifully resolves a complex program, endures as an icon for both air travel and the region, and continues to be as relevant today as it was 60 years ago despite the tremendous change within the industry.”

“The reason the Frey House II is so important to me is that it upended the concept of mid-century modern designs as a stylistic endeavor – designs that were devoid of a relationship to the landscape.

“Frey House II showcased an architecture that was truly embedded in the great landscape of the American West.

“The architecture and the landscape are so idiosyncratic and intertwined – one could simply not exist without the other.”

“Growing up, the Central Branch of the Brooklyn Public Library was my home away from home.

“This building is a wonderful synthesis of the modern and the classical, with art deco flourishes like gilded bas-reliefs. It stood and still stands in stark contrast to the banalities of much of today’s public architecture.

“Libraries serve such an important role in their communities and this one in particular continues to shape my thinking.”

The Guardian Building, Michigan, by Wirt C. Rowland of SmithGroup (1929)
Chosen by Kimberly Dowdell, principal at HOK and president of the AIA

“The Guardian Building symbolizes the ingenuity and prosperity that characterized Detroit, Michigan in the early 20th century.

“The building was designed by Wirt C Rowland, who endeavored to create a striking embodiment of the art deco style in what has been described as ‘the cathedral of finance’.

“I love this building because of the bold colors and style that it has offered for nearly 100 years to animate downtown Detroit. Both the inside and outside are stunning, especially for the time in which it was created.

“I’m especially drawn to this building because I believe that architects are guardians of the built environment, so there’s this symbolic connection that I’ve made between the Guardian Building and my calling to protect the health, safety and welfare of the public as an architect.”

Usonian Automatic houses by Frank Lloyd Wright (1951 to 1958)
Chosen by Stephanie Lin, dean of The School of Architecture

“Frank Lloyd Wright’s modular Usonian Automatic houses, a subset of Usonian (Wright’s term for ‘American’) buildings that were designed to be constructed by their owners, still stand as a radical statement on how architects can improve equitable home ownership through economical yet inventive materials, building methods and labor practices.

“The projects’ implicit questions around reducing embodied energy as we confront today’s ongoing climate and housing crises are as urgent as ever.”

Wexner Center for the Arts, Ohio, by Peter Eisenman (1989)
Chosen by Chris Beza, principal at NBBJ

“Emblematic of the deconstruction movement, the Wexner Center – in Peter Eisenman’s words – killed off the ‘decorated shed’ and disconnected architecture from modernism and post-modernism’s white and grey boxes.

“The collision between its brick turrets and shifted scaffold spine broadened my perspective on the potential foundations of architectural design and form.”

“The Brandes House in Sammamish, Washington provides us with an example of climate-responsive and resource-saving architecture.

“One of Wright’s later Usonian houses, it exemplifies the economies of diminutive scale and the judicious use of materials. This admirable example of sustainable design serves as a useful paradigm for today’s practice.”

“The porch element of a home is an architectural expression opportunity offering agency to all community members.

“For me, it inspires the design and creation of spaces for active participation from personal space into your community, like in the King-Lincoln Bronzeville neighborhood of Columbus, Ohio (pictured).”

“Paley Park, a small urban pocket of a city, is a space you encounter unexpectedly and didn’t realize you needed: light filtered by nature, sound filtered by falling water, a chair you can move, a platform that enables you to take a break and dream about your next adventure.”