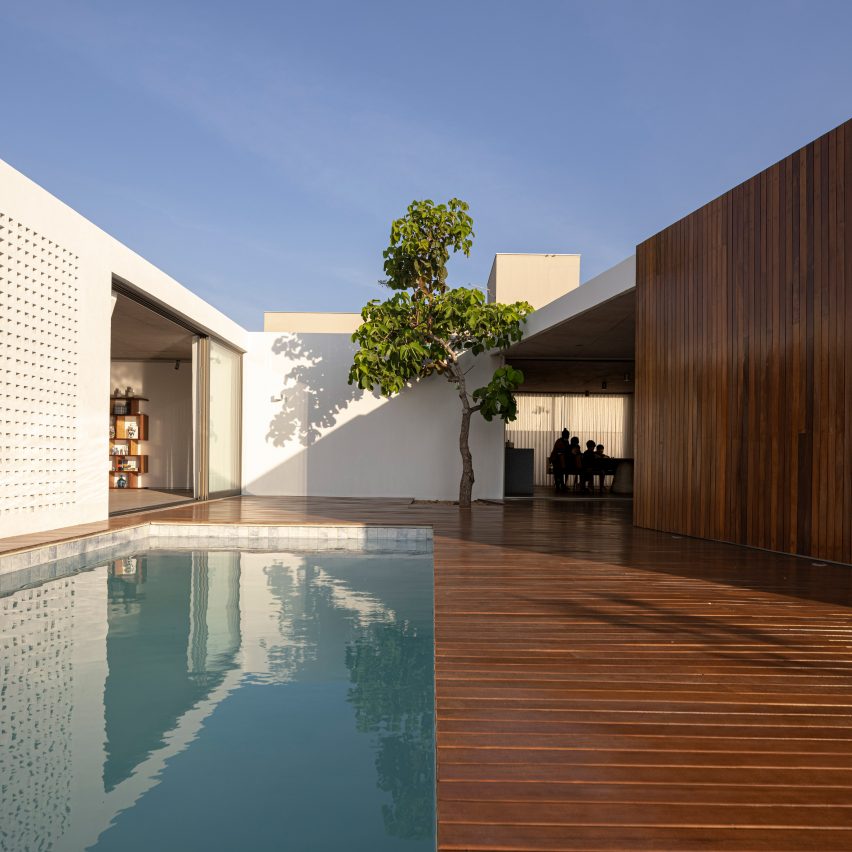 Architecture firm ARQBR has completed a family house in Brasília that features a ribbon-shaped plan and a central courtyard with a swimming pool.

The Couri House sits on a 713-square-metre plot within a residential neighbourhood in Brazil’s capital city. The property features a single Pequi tree – a protected species that is native to the region.

Adjacent to the lot is non-buildable, public green space with a newly planted forest.

It is within this context that local firm ARQBR was tasked with designing a small, single-storey home with lots of open space for a five-member family.

The architects conceived a low-lying, 340-square-metre dwelling that is roughly Z-shaped in plan and stretches nearly the depth of the site.

This configuration allowed for a large, internal patio with a swimming pool and enabled the preservation of the Pequi tree, which sits in the centre of the property.

“The solution was to launch a ribbon-shaped plan that develops around the lot, adjusting to its perimeter and forming voids integrated with gardens and with the occupation of the house itself,” the firm said.

“Due to the limited land area, it was challenging to distribute the entire program of needs on a single floor, preserving the existing ‘pequizeiro’ tree, and still configure qualified unbuilt spaces.”

The home has a concrete structural system, with average spans of five metres. Walls are made of ceramic block masonry that was painted white.

On the front facade, an absence of windows conceals what lies within the dwelling. The garage and front entrance are marked with honey-toned wood. The interior layout has a clear separation between shared and private spaces.

The front portion encompasses a garage, living room, kitchen and dining area. The back wing holds a media room and four bedrooms, each with their own bathroom.

The owners must pass through the central patio to reach the two different zones.

“The distribution of the spaces and their relationships promote unusual paths through the house, for it is natural to walk through an open space to reach a closed one,” the team said.

“In this way, everyday life experiences this relationship of continuity between inside and outside – and through it, contact with nature and the sky.”

Other projects in Brasília include a concrete home by Debaixo do Bloco Arquitetura that has light wells and an angular roof, and an all-white home by Bloco Arquitetos that is composed of irregularly stacked boxes.

The photography is by Joana França.