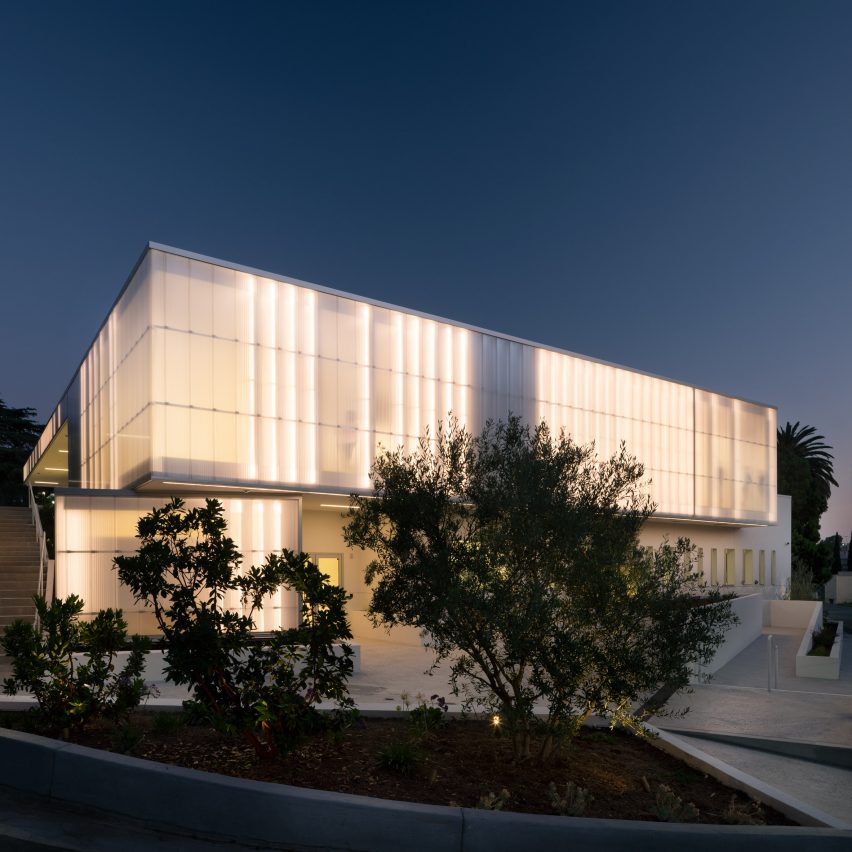 California studio AUX Architecture has converted and expanded a synagogue on LA‘s Westside to create the Glorya Kaufman Performing Arts Center for a nonprofit focused on children’s welfare.

Named after the philanthropist Glorya Kaufman, the building sits on a sloped site within the Vista Del Mar Child and Family Services in the Cheviot Hills neighbourhood.

The nonprofit institution was started in 1908 as an orphanage, and today it provides services for kids and families facing various challenges, including autism and foster care.

The project, designed by local studio AUX Architecture, entailed converting a 1950s, stucco-clad synagogue into a performing arts centre that could accommodate the therapeutic teaching and production of dance, music and theatre.

The building was originally designed by the late architect William M Bray.

“Our challenge was to preserve as much of the existing structure as possible while adding the necessary accessory support spaces for a performance venue,” said the architecture studio.

The synagogue was turned into a 300-seat theatre, while an L-shaped, two-storey addition was added to the front of the building and houses a series of flexible spaces.

“Designed to be used for multiple purposes, rooms may be a classroom by morning, rehearsal space by day and green room by night,” the team said.

On the exterior, the team added polycarbonate panels made of 35 per cent recycled plastic to the north and west facades. The translucent panels are both durable and sustainable. The light passing through the panels creates a glowing effect in the evening, the architecture studio said.

“Directly behind the facade, a series of rhythmic columns create an interplay of light and shadow,” AUX Architecture added.

The lobby and primary stairs were configured to create a sense of compression and expansion.

The concept was inspired by a dance piece called Lamentation, by late American dancer and choreographer Martha Graham, in which a dancer struggles within a garment. The performance serves as a “metaphor for the struggles many students with autism go through every day,” the team said. 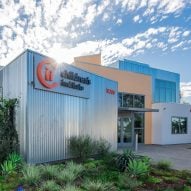 Overall, the building’s interior spaces are designed to be comfortable and adaptable.

The team chose pale colours for their calming effect and created an acoustic system that is suitable for those with sound sensitivity.

Interior finishes include terrazzo flooring and white-painted drywall. In the theatre, the team used medium-density fibreboard with a white oak veneer for slats lining the walls and ceiling.

Totalling 10,550 square feet (980 square metres), the revamped building is well equipped to serve both the Vista Del Mar community and the greater public.

“The venue is designed to draw neighbors to the heart of the campus when hosting community events, and to showcase the nonprofit’s mission to empower regional youth and families,” the architecture studio said.

Other performance venues in North America include an Ontario theatre by Hariri Pontarini Architects that features glass cladding with a bird-friendly frit and a flexible Brooklyn venue by CO Adaptive Architecture that is housed in a former industrial building.

The photography is by Nic Lehoux.