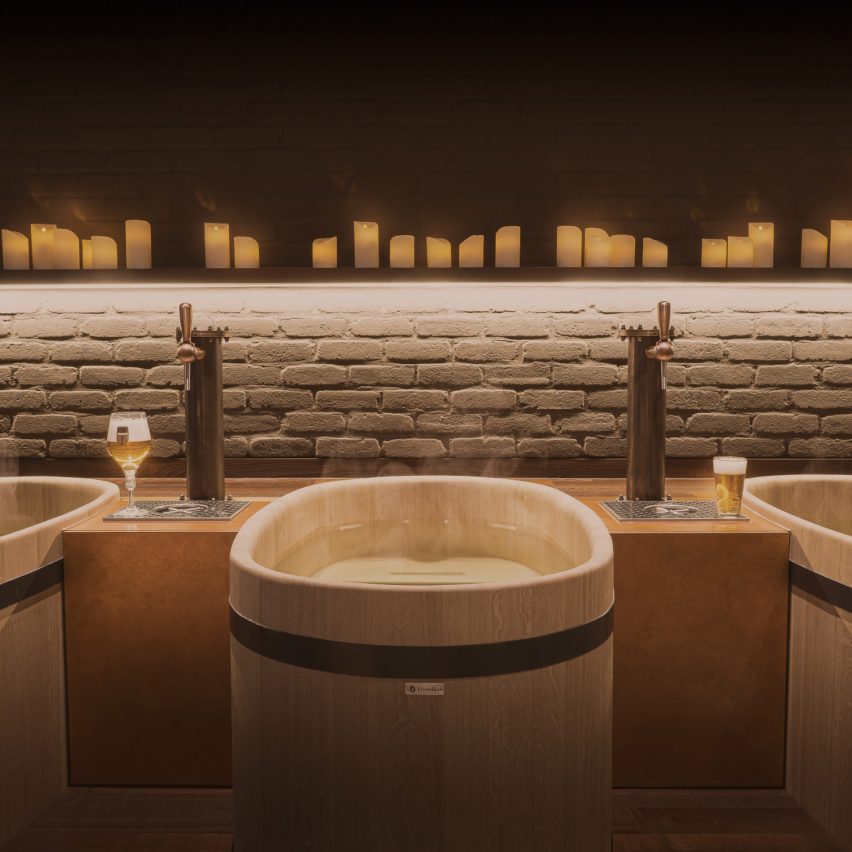 Set in a vaulted cellar in the old city centre of Brussels, Bath & Barley is an updated take on a traditional Czech beer spa from design studio WeWantMore.

Bath & Barley is the “very first” beer spa in Belgium, according to local practice WeWantMore, offering a modern take on the traditional day spas.

“Beer spas are a tradition in the Czech Republic but not in Belgium, despite our nation’s rich beer culture,” the studio explained.

“We noticed that most Czech beer spas are more beer than spa – dark, lots of neon and an overall pub vibe,” the practice added. “This wasn’t our idea of a soothing wellness experience.”

“Instead, we decided to create a sense of relaxation and intimacy, but with a link to what distinguishes Bath & Barley: beer, bathing and Belgium’s beer.”

To realise this vision, the studio drew on a palette of raw natural materials such as lime stucco, wood and straw, alongside copper and stained glass to evoke Belgium’s medieval beer brewing culture.

The spa is split across two floors, with the oak bathtubs nestled into the vaulted basement and framed by draft beer machines, where guests can pour themselves a pint.

After the bathing ritual, guests can use the spa’s sauna or rest on a staw-upholstered lounge that allows them to “connect with nature”, according to WeWantMore.

“The design supports social wellbeing and creates a unique escape from the daily rush,” WeWantMore said. 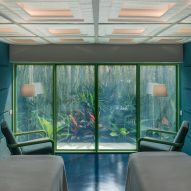 The spa’s reception is located one level up on the ground floor and is wrapped in curved copper sheets to resemble the kettles used in traditional Belgian breweries.

Dried barley hangs from the ceiling above a stone tasting counter, where guests can taste a variety of beers and select the hops they want to add to their bath.

“The natural scent of the dried barley branches dangling from the ceiling adds to the sensory experience and sets the mood,” said the studio.

Ecclesial illustrations from Bath & Barley’s visual identity are integrated throughout the interior in the form of privacy screens, which resemble stained-glass church windows, and steel balustrades that depict the different steps of the brewing process.

Bath & Barley has been shortlisted in the leisure and wellness interior category of this year’s Dezeen Awards.

Other projects in the running include a hotel spa in the Maldives designed by Marcio Kogan of Studio MK27 and a Shenzhen cinema with a copper-lined lobby.

All images are courtesy of WeWantMore.