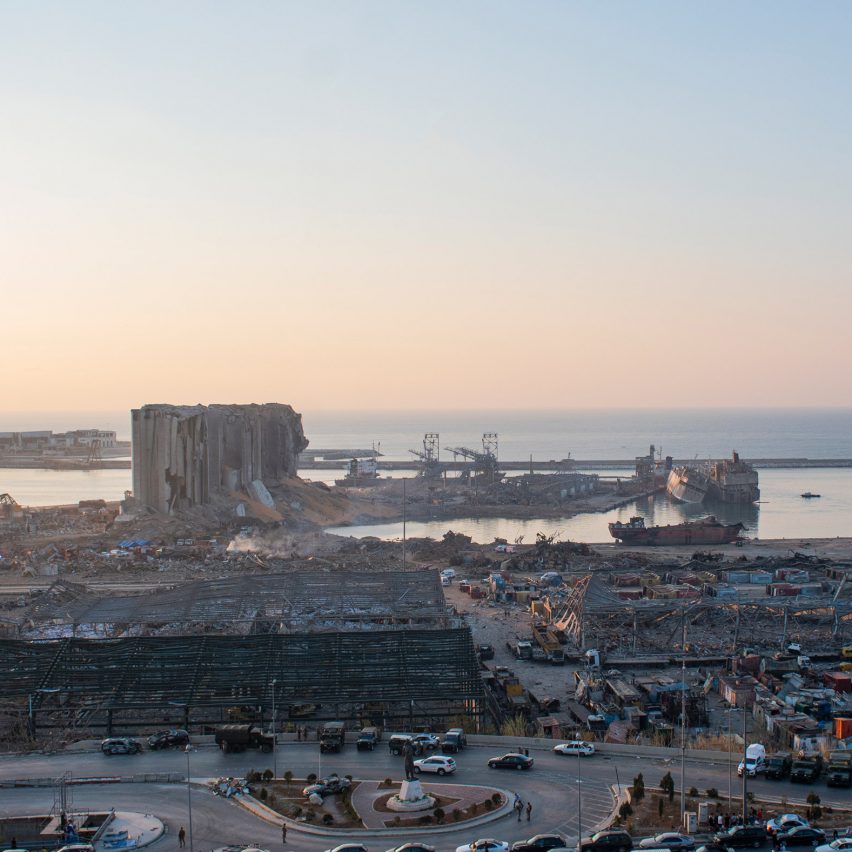 Two years on from the devastating explosion that destroyed much of Beirut, architects and designers have shared first-hand accounts of how everyday life in the city is still profoundly affected by the disaster.

“The Beirut explosion was for me the funeral of my hometown, the city I knew and once loved died on that day and will forever be dead for me,” architect and founder of foam furniture company Blocksfinj Chrystèle Karam told Dezeen.

“We all know what and who caused [the explosion] but no one is being held accountable,” said Rania Abboud, communications director of PSLab. “Those lack of answers create dispiritedness.”

The disaster on 4 August 2020 was caused by the accidental explosion of 2,750 tonnes of ammonium nitrate, which was being unsafely stored at the Port of Beirut.

It killed at least 200 people and left thousands injured while inflicting massive damage on the city’s buildings and infrastructure.

“I do not want to have a relationship with this city”

Since the explosion, architects and designers have dealt with the after-effects in different ways, with some choosing to leave Beirut and others moving within the city to areas that were less affected by the blast.

Karam previously worked from a project space in an area that was “completely destroyed” by the explosion and has since been abandoned, so she relocated her business to a co-working space next to downtown Beirut.

But the incident has changed how she feels about the city.

“I do not want to have a relationship with this city,” Karam said. “I don’t want to walk on its streets or admire its charm and particularities. I don’t want to trust it again or love it again.”

“I keep my footprint small, and I don’t care about making a change or ‘rebuilding it’ again, although deep down I love it and don’t want to belong anywhere else.”

Lighting studio PSLab left Beirut entirely after its headquarters was destroyed in the explosion, moving to its factory building in north Lebanon.

“Two years later we are still working from our factory and some of my colleagues have even moved out of Beirut to be closer to work,” Abboud told Dezeen.

“Our relationship with the city is a mixed one,” she added. “Nothing can wipe the images, sounds, fear, sorrow, loss that we have experienced on that night and the following days. Life goes on in a very disturbing way.”

Parts of the city “still demolished”

Tessa and Tara Sakhi’s architectural design studio T Sakhi moved to Venice, Italy after the explosion, which they say has impacted the city’s energy.

“There is a discrepancy between our memories of the city and what it has become: Beirut changed, its energy changed, it is empty, people left the country, others moved to the suburbs and opened their businesses in the outskirts,” they said.

Different parts of the city have been affected differently, with many areas still destroyed.

“When you walk around Beirut, you still see complete blocks still demolished, buildings that have not been repaired, broken glass on the sidewalks, broken vitrines and empty stores,” Karam said.

“Districts that were once the fanciest spots became squatter spaces.”

In contrast, other neighbourhoods have seen more repairs.

“In Gemmayze and Mar Mikhail, the centre of Beirut’s nightlife, bars and restaurants are picking up,” architect Annabel Karim Kassar said.

“They have new glass fronts, painted woodwork, and signage, some paid for by crowdfunding and donations from regulars.”

“Beirut gave me strength through its instability”

As well as the physical effects of the explosion, the creatives described a profound psychological impact.

Architect Paola Sakr, who is mainly based in Dubai but is regularly in Beirut to overlook production, said the experience of the blast taught her to stop planning too far ahead and to let go of attachments.

“Nothing is permanent, everything is in constant movement and all we can do about it is adapt,” she said. “Beirut gave me strength through its instability and this strength gave me the freedom to live in the present moment.”

Design duo David/Nicolas, which also has a Milan office, has rebuilt its Beirut studio that was completely destroyed in the explosion and says the incident made them reassess what they do.

“In some weird way, the explosion forced us to reevaluate our whole ‘system’,” the designers said.

“It also pushed us to learn how to manage two different studios at the same time. When a catastrophe of that scale happens, you kind of reassess the fundamentals that keep you going.” 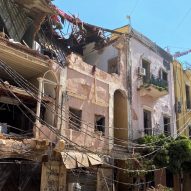 Karam described the general feeling in the city as “constant anxiety”.

“Knowing in the back of your head that it can flip from a quiet sunny day to a state of emergency in seconds at any time never makes you feel at ease, and thus you are constantly worried and anxious and therefore unable to enjoy life,” she added.

Frustration with the government remains

Directly after the 2020 explosion, many expressed frustration at the Lebanese government, which was seen as negligent for having failed to prevent the incident.

Two years later the situation is still unstable, with Lebanese creatives saying that not much has changed.

“We are still governed by the same oligarchy responsible for the civil war, the Beirut explosion and the economical collapse – nothing has changed in the country apart for a large number of the population who emigrated to survive, thus an emptiness in the city,” Tessa and Tara Sakhi said.

“Like many Lebanese who woke up the day after the explosion I was determined to rebuild,” said Karim Kassar.

“However, two years on, the country’s dysfunction is now intensified by open-ended strikes at most government offices, the country’s economic crisis continues, and social services are slowing down,” she added.

For some, there can be no proper rebuilding until those responsible have been held to account.

“We will only have closure when the political parties and individuals behind the explosion and the shambles that our country is facing are judged and held accountable,” Abboud said. “This is when we can really properly grieve and start [to rebuild] our city and our community.”

“The explosion has had a major political impact on the country and its people, leading to more divisions and a certainty that the current ruling parties cannot be trusted to provide safety and security for the local population,” Doreen Toutikian, founder of Beirut Design Week, said.

“I will never give up on this city”

But despite the ongoing hardships and the scale of the rebuilding Beirut is still facing, there is a willingness to keep working to bring the city back to what it once was.

Many people Dezeen spoke to expressed a belief that the people of Beirut and Lebanon will be able to work together to revive the city.

“Architecturally, there has been a huge work done by local architects, NGOs and both local and international donations to rebuild,” Abboud explained.

Architect Lina Ghotmeh, who is currently working on a project in Beirut and two other buildings in Lebanon, said that the economic situation in the country has led to an interest in local resources and in “developing local industries in the objective of allowing more self-sufficiency within the country and eventually building a sustainable approach to living”.

“One never leaves Beirut mentally, there is always an attachment to this city,” Ghotmeh added.

Sakr also chose to keep working in Beirut in order to help Lebanon.

“I will never give up on this city, the same way our corrupt government won’t loosen its grip,” she said. “The reason it is so crucial for me to keep my production in Beirut is that I figured it was the bare minimum I could do for my country.”

“Rejoining the city was tough at first, however the love we have for Beirut is impossible to explain and we think that all Lebanese people have it too,” David Raffoul and Nicolas Moussallem of David/Nicolas said.

“Beirut is healing too, its streets are lively again and there is a sort of common cause that united so many people.”

The main image is courtesy of PSLab and was taken from its studios.

The post Beirut explosion was "the funeral of my hometown" appeared first on Dezeen.