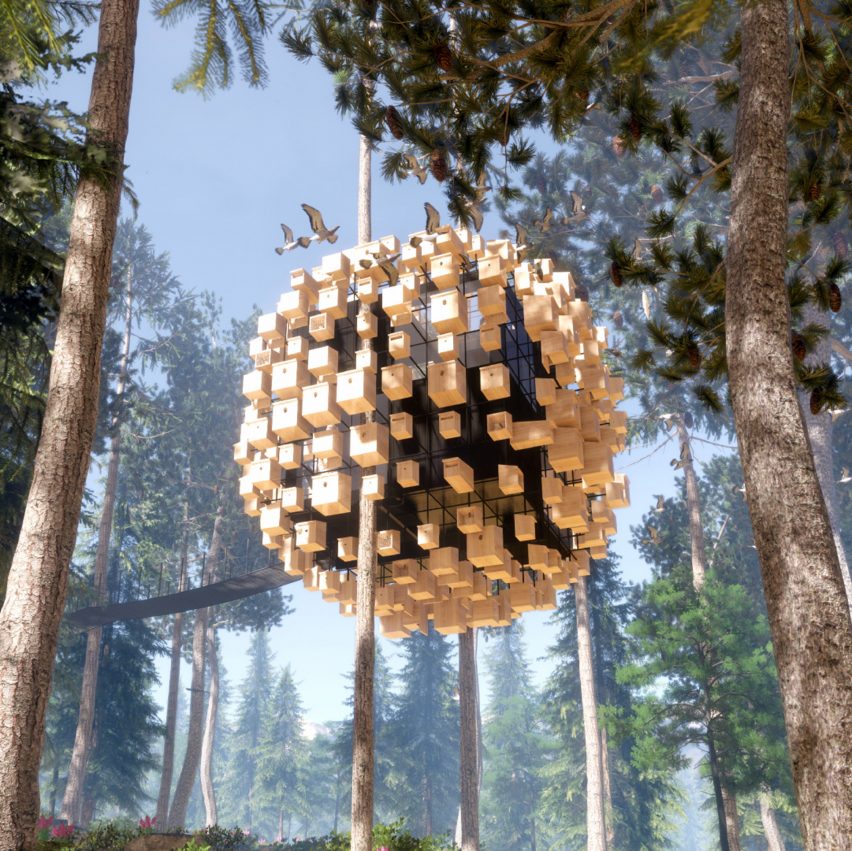 Danish architecture studio BIG has unveiled its design for a hotel room surrounded by hundreds of birdhouses for the Treehotel in Sweden.

Titled Biosphere, the birdhouse-wrapped hotel room will become the eighth room at the  hotel, which is located in a remote forest in Swedish Lapland.

The architecture studio hope that the 350 birdhouses surrounding the room will inspire visitors to install birdhouses at their own homes.

“By designing a treetop hotel room with a facade of bird nests, the aim of Biosphere is to decrease the downward spiral of the bird population in the Swedish woods and instead strengthen the biosphere and natural habitat,” said BIG.

The hotel room will be suspended above the ground and accessed via a bridge that connects the forest floor to the treetop entrance.

350 birdhouses of varying sizes will protrude from the cubic structure and form a spherical cloud form around the room.

“Inventories in Norrbotten County, carried out both by us as ornithologists and by the County Administrative Board, show that a number of different bird populations are decreasing,” said Ulf Öhman, chairman of the Norrbotten Ornithological Association.

“Forestry has led to a reduced number of natural holes in trees where breeding bird nests. The installation of bird nests is therefore an important measure to take.”

Seven unusual treehouses you can sleep inside at Sweden’s Treehotel

“Furthermore, climate change leads to the insect boom happening earlier in the year, and by the time the birds’ eggs hatch, the boom has already passed. Feeding is an important support mechanism for the birds that stay in Northern Sweden and require food during winter,” he continued.

“Demonstrating the use of bird nests and feeding, not just at the Treehotel but for people to install near their own homes, is valuable. An initiative from Treehotel to take such measures may inspire their visitors to do the same.”

Inside, the hotel room measures 34 square metres and includes a material palette informed by the natural and wooden surroundings.

Triple-glazed, full-height windows, as well as glazed ceilings and floors, will provide guests with ample spots for birdwatching and a roof terrace will also offer panoramic views of the forest.

“I got to spend a few days and nights in some of the Treehotels rooms right before the pandemic, and left with a sense of rejuvenation from a complete immersion in nature,” said BIG founder Bjarke Ingels.

“I couldn’t help wondering if there was a way to take the immersion one step further – and almost instantly the idea of inviting not only the human visitors but also the resident bird and bat population to cohabit a spherical swarm of nests came to life.”

Treehotel is currently comprised of seven architect-designed treetop hotel rooms that are suspended from and around the trunks of pine trees.

The other rooms include a mirrored glass box designed by Tham & Videgård Arkitekter and a huge nest designed by Inrednin Gsgruppen and a charred-timber treehouse by Snøhetta.

The bird box-covered room was revealed following bird experts calling for legislation to enforce the prevention of bird deaths attributed to glass facades and architecture. In late 2021, hundreds of migrating birds died after crashing into New York City’s glass skyscrapers.

Other projects by BIG include this building in the metaverse, a virtual office for media company Vice Media Group titled Viceverse.

Visualisations are by BIG.