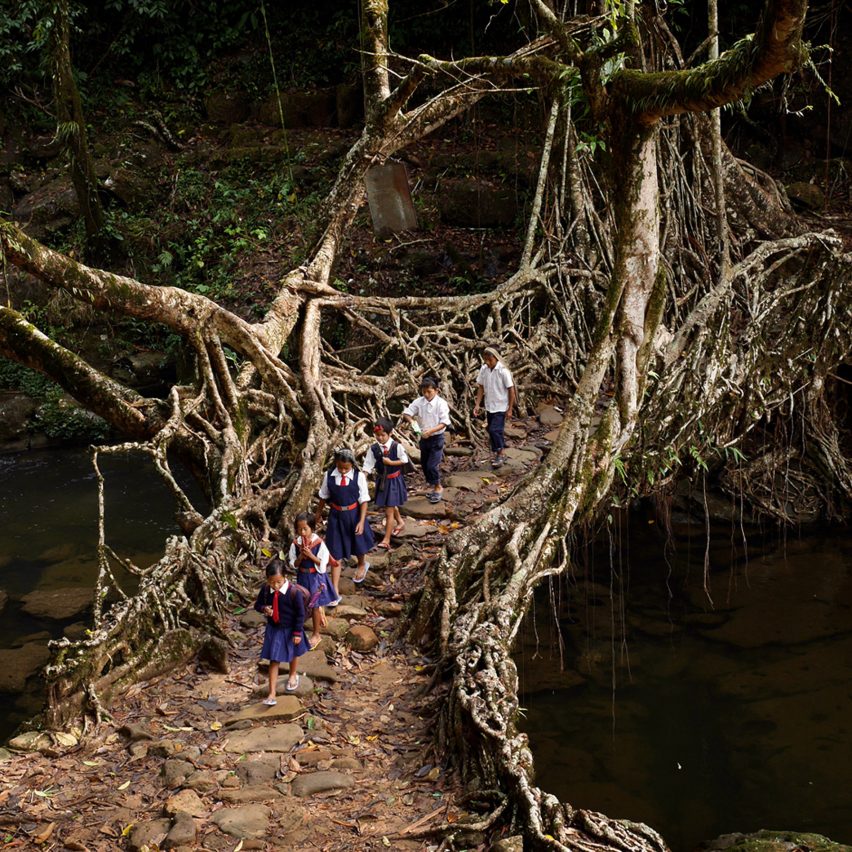 Roofs made from living trees and floating houses on reed islands are among the urban planning concepts developed by engineering studio Buro Happold in collaboration with indigenous communities as part of an installation called Symbiocene.

The project, commissioned for the exhibition Our Time on Earth at London’s Barbican Centre, presents three proposals for how indigenous building technologies could be applied to cities by 2040 to make them more resilient to climate breakdown without contributing to it.

Visualised through architectural models overlaid with video projections, each concept is based on a nature-based design strategy developed by different aboriginal communities from around the world – the War Khasi of north-eastern India, the Ma’dan of southern Iraq and Bali’s Subak farming cooperatives.

Through a series of workshops between the first nation builders and engineers from British firm Buro Happold, these technologies were applied to the most pressing environmental issues facing our cities – water scarcity, rising temperatures and sea levels.

“Cities all over the world are completely aware that conventional construction is very problematic in terms of the climate emergency and ongoing resilience,” said Buro Happold’s sustainability director Smith Mordak.

“We have solutions but we’re usually looking in the wrong places. If we collaborate with indigenous communities, who have been developing technologies that are respectful of the way that ecosystems work for centuries, then we can have a vision for 2040.”

The first Symbiocene concept uses the floating islands made from layers of reed, on which the Ma’dan build their homes in the marshes of southern Iraq, to help retrofit coastal communities so they can survive higher sea levels.

This would involve jacking up lighter at-risk structures like single-family houses and building a structure underneath so they can be lifted onto reed islands and turned into off-grid homes with their own energy supply and composting toilets.

“When the reeds decompose, they trap air so they create these buoyant bubbles, which means that the islands are floating,” Mordak told Dezeen.

“And then you can create homes on them, you can farm on them because the layers upon layers of the reeds create an island and an earth. And underneath the islands, there are these amazing bio-havens that provide habitat for water life.”

Using pontoon bridges, these floating islands could then be connected to existing infrastructure that has survived on higher ground as well as larger buildings raised up on stilts.

In this way, the project hopes to offer an alternative to common flood resilience proposals like barge communities, which would require considerable resources to build from scratch.

“We talk a lot about retrofitting rather than building new and we wanted to apply some of that thinking to existing waterfront communities,” Mordak said.

“A lot of the ideas that have been put forward are kind of like concrete pontoons but we were trying to look at a bio-based approach.”

The second concept uses a trellising technique, which the War Khasi people use to construct bridges from living trees, to form a network of covered walkways connecting city dwellers to public transport stations.

Ficus trees with aerial roots would be planted at different levels over bamboo scaffolds and their roots and branches trained to form dense roof structures that can shield pedestrians from rising temperatures.

“This is particularly relevant in climates where it’s getting hotter and actually cycling or walking for any distance is getting increasingly uncomfortable and difficult,” Mordak said.

“The trees provide shade, improve air quality and lower surface temperatures through the process of evapotranspiration. That’s going to make a big difference to how far people are willing and able to use those sustainable forms of transport.” 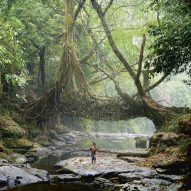 The final Symbiocene concept hopes to tackle the problem of water scarcity by moving away from a centralised “out of sight out of mind” water management system.

Instead, it proposes establishing small cooperatives at neighbourhood level, based on the Subak system used in Bali to irrigate rice terraces, which would see locals work together to distribute water according to need and encourage them to use this finite resource more responsibly

“Because water is managed at a local level with a small group of people, it’s not abstract,” Mordak said. “So you’re going to think much more carefully about what you use, and you will be able to see the results.”

Instead of purifying all water used across a city to drinking-water quality, the concept proposes a two-step nature-based system, in which neighbourhood reed beds are used to clean water for flushing, showering and other daily activities.

From here, local cooperatives would decide how much water needs chemical purification in order to make it drinkable for the community, with any wastewater used to irrigate nearby reed beds used for growing food.

“One of the questions that came up in the conversation was, why do we in western cities shit in drinking water,” Mordak said.

“Why are we using a huge amount of energy and chemicals to create very clean, drinkable water and then we’re using it for things that don’t need that level of purification.”

To select the building techniques presented in the installations and establish relationships with the different communities, Mordak worked with Julia Watson, author of the much-publicised book LO–TEK Design by Radical Indigenism.

The installation forms an attempt at finding practical applications for some of the indigenous technologies outlined in the book within a dense urban environment.

“If we did a bit more work, you could build the concepts,” Mordak said. “They’re all intended to be completely realisable.”

Alongside the concepts, Mordak and Watson also formulated a “smart oath”, recorded on a public blockchain to set out how any kind of profits made from these ideas will be shared with the relevant communities.

“The project has been about how can we facilitate a fair and just knowledge exchange between ourselves, the engineers and landscape architects and architects, and the indigenous communities and the builders of these indigenous technologies,” Mordak explained.

“If you’re getting a bunch of design fees and you’re using these ideas, these indigenous communities should be remunerated for their contribution. If we’re not very clear about the way in which that should happen, then they could be exploited very easily.”

All images are courtesy of Buro Happold unless otherwise stated.

Our Time on Earth takes place at London’s Barbican until 29 August 2022. See Dezeen Events Guide for an up-to-date list of architecture and design events taking place around the world.