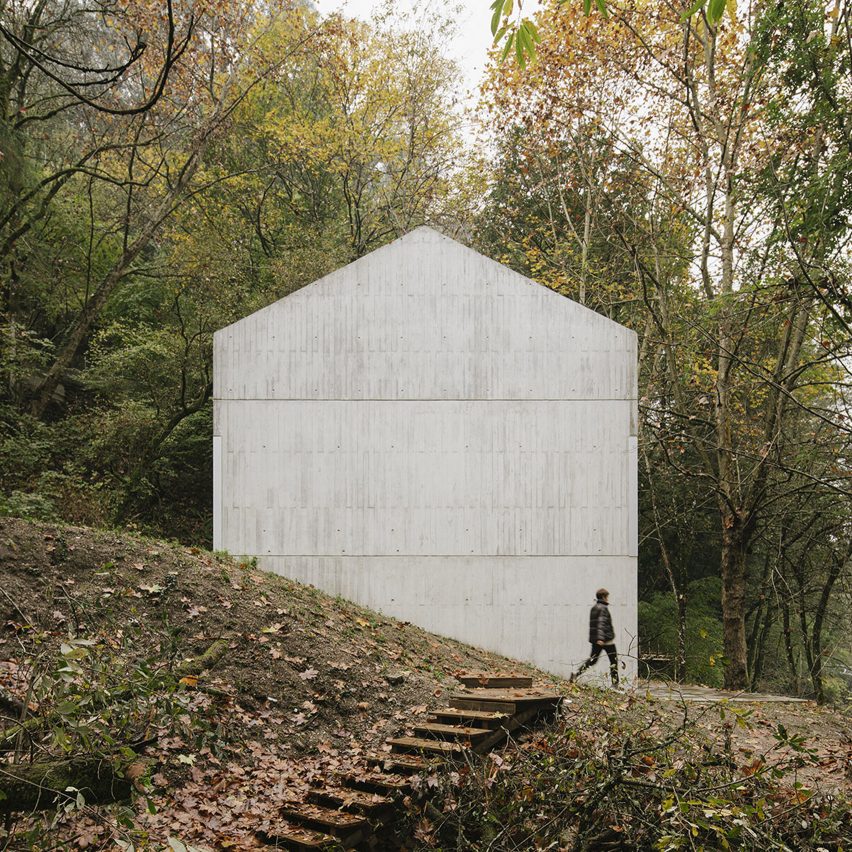 Concrete and glass are used throughout the interior and exterior of this holiday home in northern Portugal, which local studio Carvalho Araújo designed to blend in with its woodland setting.

Located in Vieira do Minho in the district of Braga, Casa na Caniçada is a second home built on a densely wooded 0.75-acre site next to the Caniçada reservoir.

An existing building of poor design and construction quality was removed to make way for the three-storey house designed by local office Carvalho Araújo.

The original building’s volume informed the scale and proportions of the new house, which was designed to accommodate the typical spaces required for single-family living.

The programme is arranged with the bedrooms on the upper floor and social areas including the kitchen, dining area and living room spread across the lower levels.

Due to the sloping site, the bottom level is partly embedded in the hillside. This space containing the kitchen and dining area features large openings on two sides that connect it visually with the forest.

The house is entered on the middle floor, which is lined on opposite sides by full-height windows. The opening containing the entrance looks onto the hillside, while the other side frames a view towards the reservoir.

“The landscape and the place are the essence of this project,” architect Joana Nunes told Dezeen. “Simple solutions were sought in terms of spaces and materials to achieve what is difficult to define or explain… It’s something you live and feel.”

The entirely open-plan living space contains a large hearth at one end, with staircases at the opposite end connecting this floor with the upper and lower levels.

The building features a simple gabled form and is constructed entirely from raw, exposed concrete. The resulting bunker-like structure extends the sense of protection offered by the natural surroundings.

“The choice of concrete reinforces the notion of freedom that was sought in the definition of the programme, allowing the creation of wider spaces,” Nunes said.

Inside the house, the concrete walls, floors and ceilings are polished to create smooth surfaces that reflect both natural and artificial light and help to brighten the spaces.

On the upper floor beneath the slanted roof, four beds are arranged towards the centre of the space, with toilets and small shower rooms located at either end.

Glass walls lined with curtains provide some privacy for the bedrooms whilst retaining the sense of a large, communal sleeping area.

The agency has previously completed a concrete house with a rooftop pool that looks onto the Serra d’Arga mountains, and a rural residence house comprising a concrete structure and timber roof form separated by a horizontal band of glazing.

Photography is by Nudo.