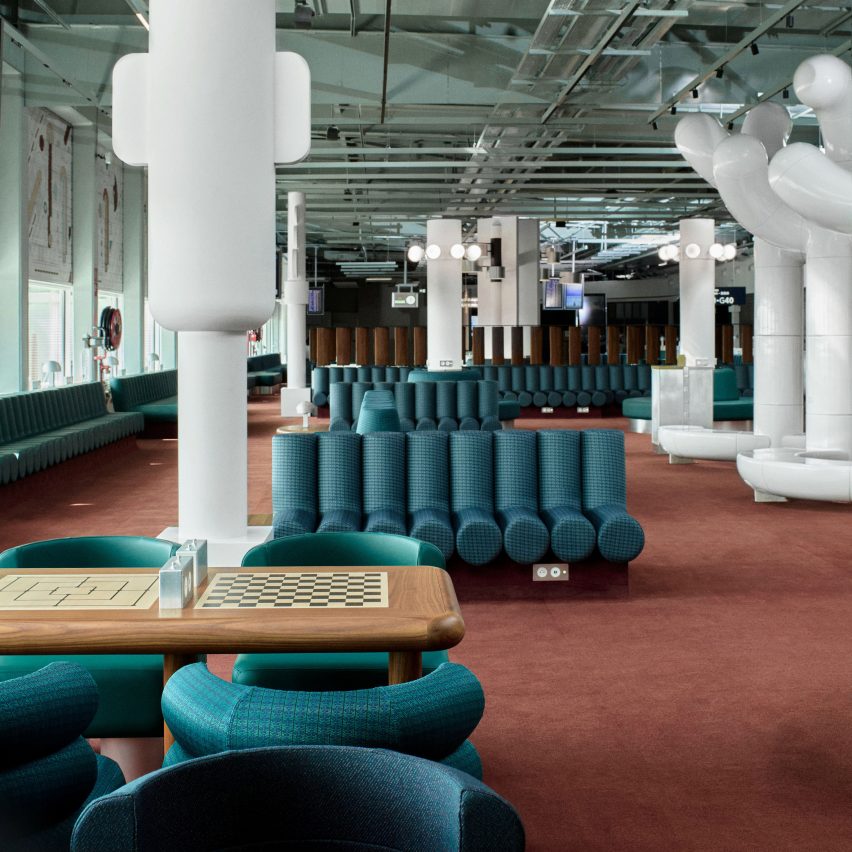 Chzon studio redesigned the boarding gate area in Terminal 2G with the aim of creating a dynamic representation of Paris’ design and history in a typically utilitarian area of the airport.

The 1,300-square-meter space is populated by rounded seating in dark blue and green upholstery, which takes aesthetic cues from the 1960s and 1970s, arranged in benches, booths and pairs.

To zone the space and instill privacy, the studio added partitions and expressive white sculptures by artist studio Les Simonnets, which double as alternative bench seating.

The studio made reference to iconic Parisian monuments by installing archways that nod to the Arc de Triomphe, as well as a fountain that is reminiscent of the water feature in the Jardin du Luxembourg and surrounded by green metal chairs similar to those found in Paris’ parks.

Rows of wooden tables have been inlaid with chess boards in another reference to the parks of Paris. Passengers can use these as workspaces, to eat at, or to play games on while waiting for flights.

As well as designing some of the lighting for the interior in-house, the studio also sourced and installed antique lighting and other decorative objects from the city’s St Ouen flea market, including giant wall lights and aluminium sunshades. “[The design] dramatises the boarding lounge while keeping the passenger informed,” Dorothée Meilichzon, founder of Chzon studio, said of the interior design.

“The departure lounge becomes a smooth transition between the Paris that we are leaving and the plane that is going to take off.”

The space also features a mural inspired by the work of French painter Sonia Delaunay that sits above the windows, which overlook the runways and allow views of planes taking off and landing.

This fresco also references symbols used in airport signage and carries similar rounded motifs to the ones present in the retro-style seating and lighting.

Other airport-related projects published on Dezeen include the cosy remodelling of an airport in Colorado, USA by Gensler and an airport that contains the world’s tallest indoor waterfall by Safdie architects.

Images are courtesy of Chzon studio