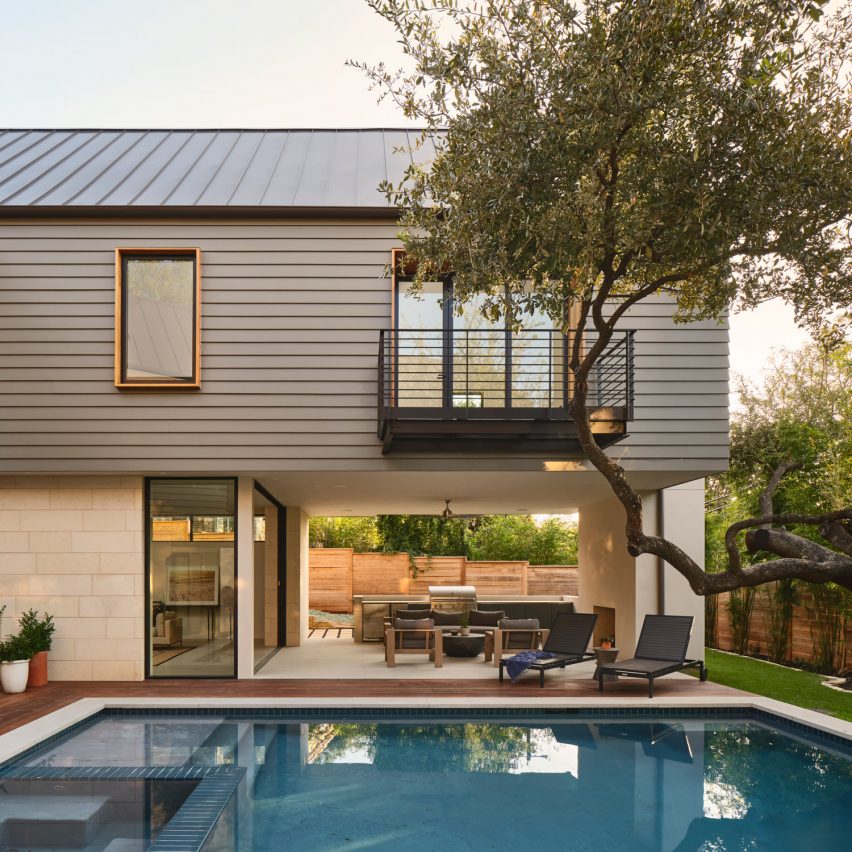 Gabled forms clad in Texas limestone and fibre cement form a family home by US studio Clayton Korte, which is meant to blend in with the character of its Austin neighbourhood.

Set on a sloped site, the Hartford Residence is located in Clarksville, an established neighbourhood in Austin.

The owner desired a home that offered artful details and a sense of fluidity. The residence is also meant to blend with its context.

“As the city of Austin continues to grow, this residence evokes a modern simplicity while respecting the history of the surrounding Clarksville neighborhood,” said Paul Clayton, a principal at local architecture studio Clayton Korte.

The dwelling is roughly H-shaped in plan and consists of gabled forms linked by a central, glazed volume. This connector piece holds a foyer and offers views from the front of the house to the backyard.

From the street, the 5,295-square-foot (492-square-metre) home appears to be only one storey. A lower level, however, is found in the rear portion of the home, where it tucks into the sloped site.

Within the dwelling, one finds light-filled rooms and a sense of unfolding, as the interiors work through the angles and wings of the envelope.

“Rooms open one after another and draw one forward to discover what comes next,” the architecture studio said. “The unfolding spaces provide a sense of discovery for residents and guests.”

One side of the house has a three-car garage and an open-plan kitchen, dining area and living room, which are held under a soaring, vaulted ceiling. Just off the living room is a balcony that overlooks the rear yard and swimming pool.

Sleeping areas are found on the other side of the house, where the team placed a generous main suite and two guest bedrooms, each with their own bathroom.

Ample glazing in the main suite – including a large window and bathroom skylight – offers an ever-changing interplay of light and shadow, the team said. 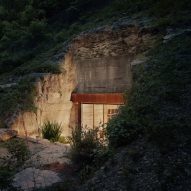 An open-tread staircase leads down to the lower level, where one finds additional sleeping space and a large family room. “Disappearing glass doors” lead to a covered patio with an outdoor kitchen, and beyond it, the pool.

Throughout the home, the team used earthy finishes such as wide-plank, white oak flooring. Neutral colours are meant to draw attention to distinctive details, including black-stained cabinetry and a kitchen island made of walnut and wood.

Other projects by Clayton Korte, which was formerly called Clayton & Little, include its own studio, which entailed the overhaul of a mid-century office building in Austin, and the creation of a wine cellar in a limestone cave in Texas.

The photography is by Andrea Calo.