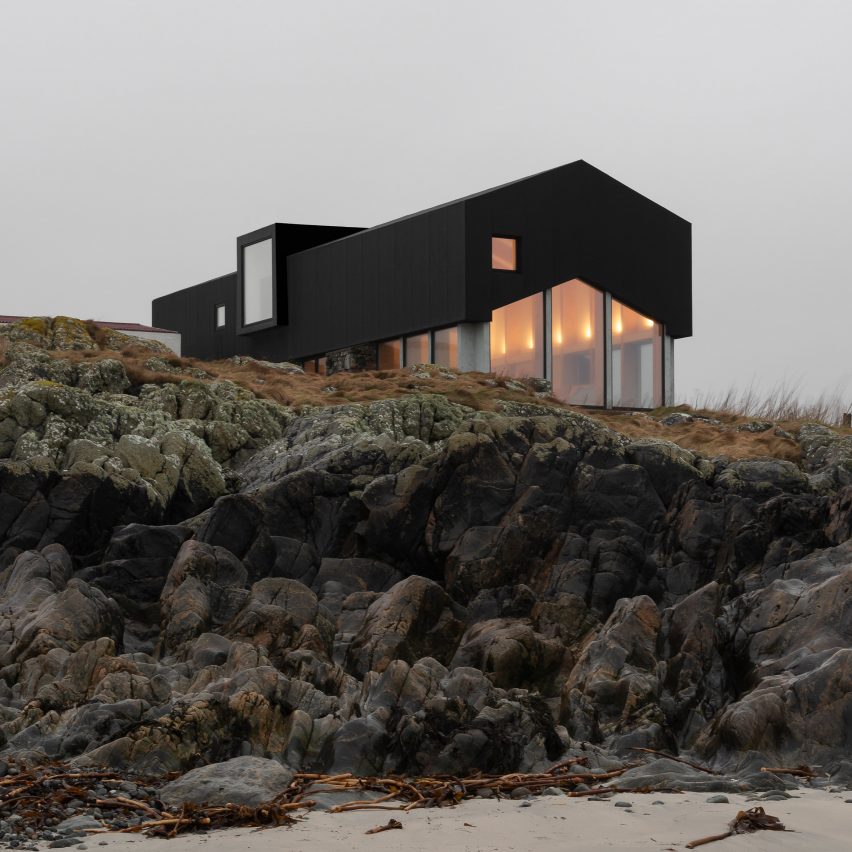 Architecture studio Denizen Works has completed a house on the Scottish island of Tiree, featuring a gable-shaped glass wall that recalls the outline of the derelict stone cowshed it replaced.

The previous owner of the site in the small township of Mannal decided to sell an existing house and the adjacent working yard as two separate lots, with the new building occupying part of the old farm complex.

The site is elevated above the sea on the southeast tip of the Hebridean island, and the house is designed to make the most of views looking towards mainland Scotland over the Isle of Mull.

Denizen Works, which has offices in London and Glasgow, was commissioned to design a four-bedroom property to occupy a plot surrounded by other farm buildings and ruins.

Among the ruins was a derelict cowshed, known as a byre, which was built from local stone but had fallen into disrepair and was missing a roof.

Denizen Works chose to position the house within the existing walls, which were rebuilt to retain one of the gable ends.

“These agricultural relics drove the formal organisation of the house and in particular the ruins of the gabled byre,” the architects explained.

“The resultant house, split into two wings, nestles into the rebuilt stone walls which drive the main architectural expression of the building.”

The original gable wall was reinstated and now incorporates an entrance to a sheltered courtyard, where another opening frames a view towards a nearby group of lighthouse cottages.

A door from the courtyard leads into a hallway that extends through the building, culminating in a living area where the negative shape of the stone gable is replicated in three fixed glass panels.

“To create this expression, we copied the volume of the byre, slid it out beyond the old boundary wall, and lifted it up to create the negative gable form,” said Denizen Works. 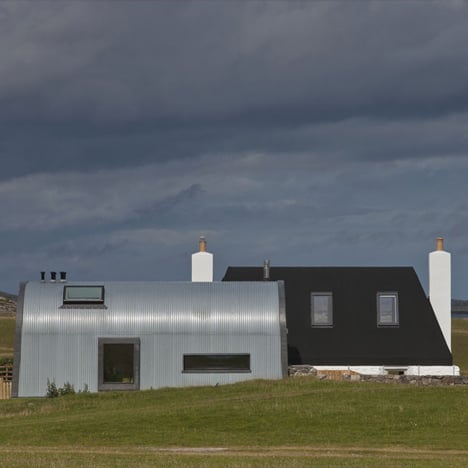 House No.7 cottage and extensions on the Isle of Tiree by Denizen Works

The resulting space contains a double-height lounge area surrounded by a chunky timber frame with windows slotted in between the pillars.

The sitting room is immersed in the scenery and the sea views, resulting in an experience the architects described as “feeling like being on the prow of a ferry”.

The house’s main volume also contains a kitchen and dining area, a snug, and a service core housing a pantry, storage and staircase. The first floor accommodates the main bedroom suite with a study area.

An adjoining volume set at right angles to the main wing houses three further bedrooms and two bathrooms with views toward the sea.

The house is clad in materials that reference the local vernacular, with the two wings featuring distinctly different treatments to evoke the ad-hoc approach to construction on nearby farms.

The upper section of the main volume is wrapped in black bitumen-coated timber that combines with the original stone walls to give the structure a monolithic feel.

The bedroom wing is covered with white rough-cast render and topped with a galvanised corrugated-metal roof that evokes traditional barn buildings.

The entrance is lined with silvered timber boards, and the two wings are connected by a glazed link that allows views of the surroundings while transitioning between the spaces.

Denizen Works previously designed another house on Tiree for founder Murray Kerr’s parents. The award-winning House No.7 is a rebuilt stone cottage adjoined by two wings that reference agricultural sheds.

Kerr established the practice in 2011 and Denizen Works has since produced projects around the UK and abroad that are rooted in an understanding of place.

The studio’s previous works include a church with a pop-up roof that was built on a canal boat in east London, and an apartment building in an English seaside town that references traditional fishing huts.

Photography is by Gilbert McCarragher.