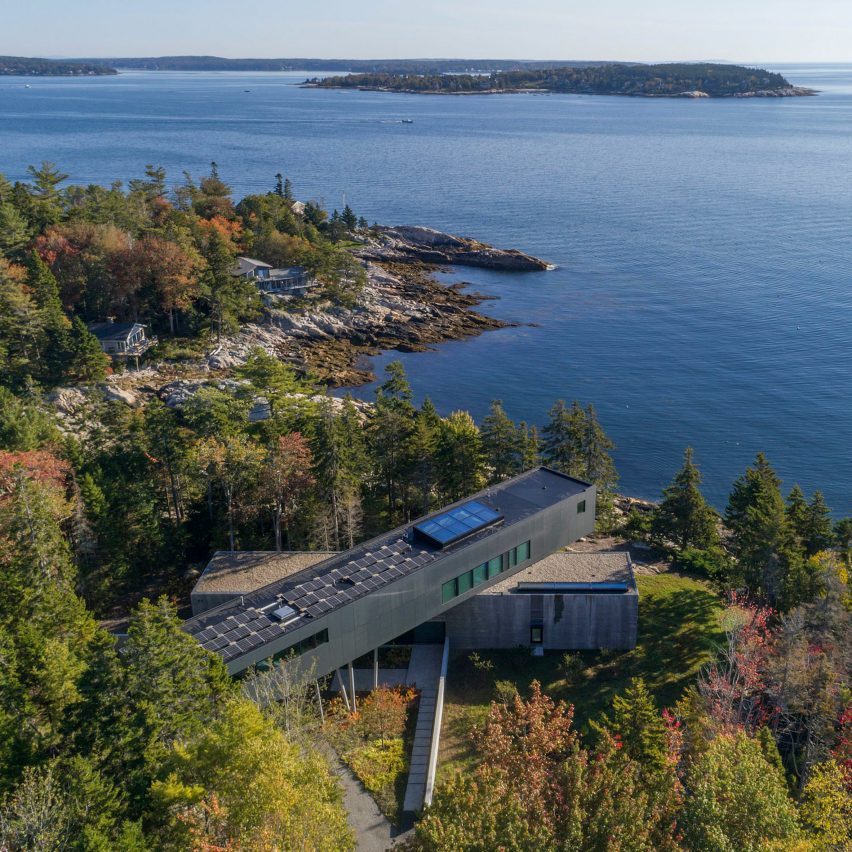 Maine studio Elliott Architects has created a seaside house that includes a dramatic, cantilevered volume on stilt that stretches towards the ocean and the tree line.

Completed in the spring of 2021, the 6,060-square-foot (563-square-metre) House on a Bay is composed of two distinct bars that sit atop a steep site overlooking a bay in Southport, Maine.

The 3.5-acre parcel originally held a crumbling house, an uninsulated seasonal bunkhouse and a storage garage from previous owners. Elliott Architects demolished the main house and relocated the other two structures to start the design with a clean slate.

“The client was not beholden to the prevailing style of houses in the area, most of which are traditional, vernacular, New England wood-framed structures,” the studio said.

“He felt strongly that this building should be singular, much like its site. The genesis was a blank slate, influenced only by the program brief, the surrounding landscape, and our collective imaginations.”

The regulatory and topographic site limitations provided an opportunity for the studio to challenge how the house engaged the landscape in multiple dimensions.

The design is a tripartite concept with elements in the ground, on the ground and above the ground.

The ground floor – with living, kitchen and dining spaces, as well as a garage and deck – is firmly anchored to the earth.

The upper floor – with two bedrooms – is rotated and cantilevers over the driveway, “teasing the inhabitant with the prospect of endless horizon all while perched in the treetops,” the studio said.

Partner JT Loomis told Dezeen that the rotation allowed the design to expose and engage with the sectional qualities of the ledge.

“The angle of the upper bar and position of the building was sited to save mature trees and accentuate the views both into the bay and into the woods,” he said.

The lower bar is board-formed concrete that is carved away with glass and steel, while the upper bar is clad in phenolic wall panels.

The upper bar is supported by angled galvanised steel columns that echo the organic and irregular pattern of the surrounding spruce trees. 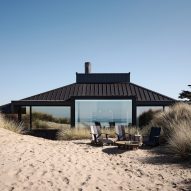 “We wanted to keep the palette of materials simple and clean, a clear expression of how the building was made,” Loomis said.

On the interior, the architecture studio used a simple palette in line with the client’s desire for “white space” on a page.

“This led to a spatial concept grounded in continuous, voluminous, light-filled spaces with varying levels of transparency based upon privacy requirements,” the studio said.

The interior is characterized by a large glass staircase with cantilevered treads that turn with the rotation of the upper level.

“The detailing is equally spare,” Loomis said. “A simple set of materials that serve a purpose, express making, and provide a quiet surrounding to be filled with the life, activity and art of the inhabitant.”

Other projects along the Maine shoreline include Elliott Architects’ house lifted over the water by wooden piers and Berman Horn Studio’s cedar-clad coastal retreat.

The post Elliott Architects uses dramatic cantilever for House on a Bay appeared first on Dezeen.