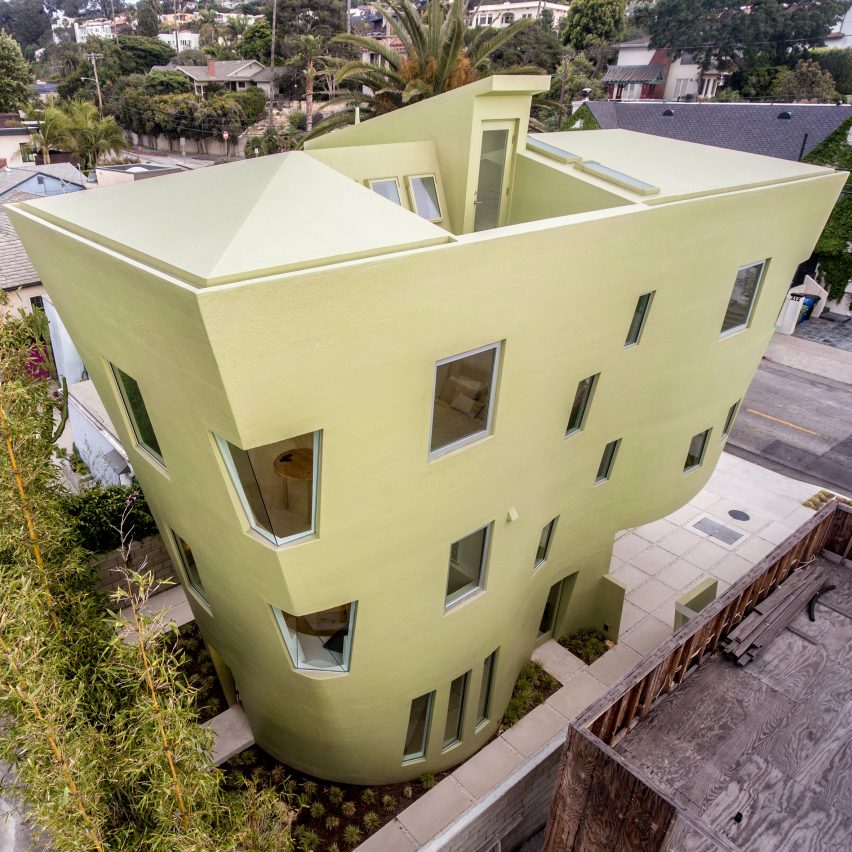 California studio Eric Owen Moss Architects has completed a three-storey home that changes shape as it rises and features an industrial-strength rubber coating.

Designed for founder Eric Owen Moss and his two teenage children, the A+M House is located in a beachfront neighbourhood in Santa Monica Canyon, just a block away from the Pacific Ocean. The area is known for having experimental work by architects such as Richard Neutra, Eero Saarinen and Charles and Ray Eames.

For a nine-by-18-metre lot that backs up to a canal, local studio Eric Owen Moss Architects conceived a highly sculptural, three-level home that explores “conceptual possibilities”.

In contrast to the typical orthogonal building, the 181-square-metre house changes shape from top to bottom.

At the roof level, it takes the form of a rectangle. Closer to the base, however, it has a curvilinear plan that takes a shape close to the body of a guitar.

“The perimeter walls are in continuous transformation between those two plan shapes,” the architecture studio said.

“The building is ‘kinetic’ from ground to sky in the sense that it is never a constant shape.”

The walls were designed using a “direct-to-construction” Rhino 3D model, and studs were then cut with a CNC (computer numerical control) machine to achieve their shape.

“There has been a lot of design conversation generally regarding the new and novel milling capacity to reshape space,” the studio told Dezeen. “Among other issues, the exterior wall is an investigation of that claim.”

Facades are punctured with different-sized windows and are covered in a waterproofing material called polyurea, which is often used on bridges and containment tanks. It is grey when sprayed on and then transitions to a yellowish green.

This house marks “the first time this rubberized coating has been used on an exterior over wood construction,” the architecture studio said, adding that they used the material to emphasize the effectiveness and precision of the CNC milling process.

“Whereas a shingle, plaster or metal panel has sufficient depth to ‘adjust or reshape’ the facade, the rubber does not,” the team said. “So, the precision of the milled wall is confirmed by the thinness of the rubberized finish.”

On the ground level, a portion of the house was carved away to form two parking spaces covered by bowl-shaped overhangs. Between them is the front door, which leads into a corridor.

At the centre of the dwelling is an atrium. Rooms are organized around this central void, which is traversed by bridges on the upper floors. 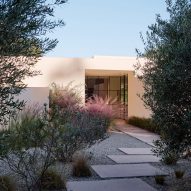 Because the home is experimental in nature, determining the exact use of each space is an ongoing process, the team said.

“There was never an effort to accommodate ‘conventional house’ uses in the project,” the architects said.

“Rather, there were intent areas that suggest varying use options, including some we didn’t anticipate.”

On the ground level, there is a kitchen and dining area, along with a library that is integrated into the atrium.

“We also thought that it could be used as a surrogate sleep-over room, with the curving couch accommodating perhaps three sleepers, positioned around the curving couch,” the architecture studio told Dezeen.

Also on the first floor is a theatre-like space with tiered seating and a retractable screen. The floor slopes in accordance with the parking cutouts on the front elevation.

The theatre is used for multiple purposes and has become a favoured spot amongst Moss’s kids, who use it to watch television and sports, play video games and do schoolwork via Zoom calls.

On the home’s second level, one finds two bedrooms, each with a sitting area and bathroom. The top level is a roof deck with views of the neighbourhood and ocean.

Interior finishes include drywall, concrete flooring and tile for bathroom flooring and walls. Baltic birch plywood was used for the stairs and for flooring on the upper levels.

Eric Owen Moss started his LA-based studio in 1973 and served as the longtime director of SCI-Arc, where he continues to teach. He has also held appointments in the architecture programmes at Harvard University, Yale University and Columbia University.

Other American dwellings with curved walls include a sculptural, all-white house in Los Angeles by local studio Pentagon.

The photography is by Eric Owen Moss Architects.