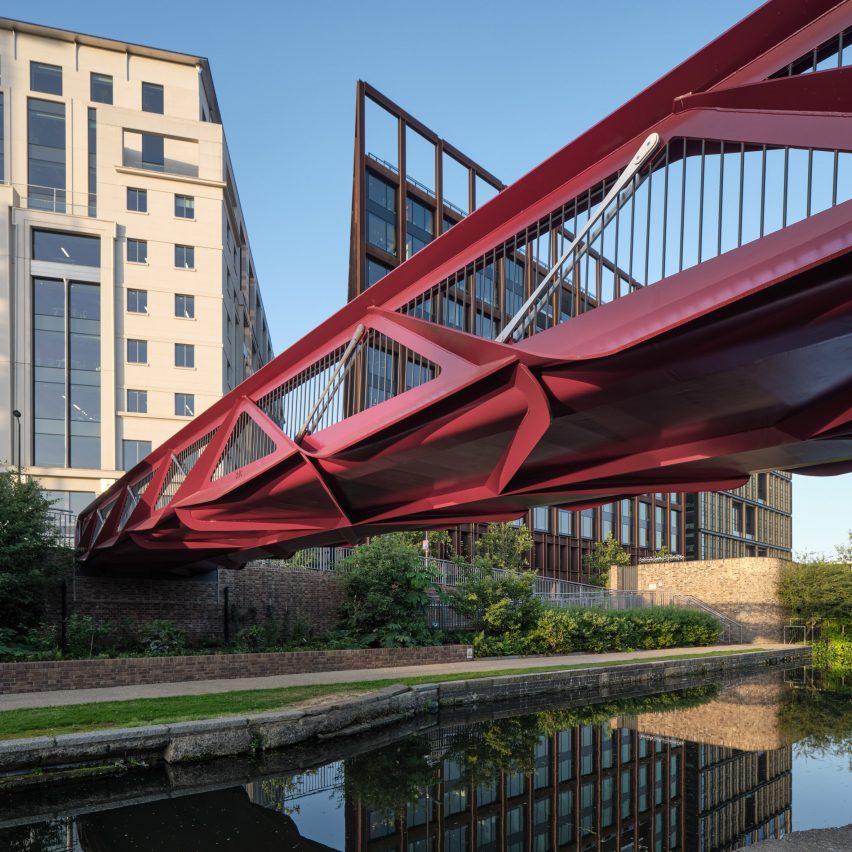 Moxon Architects has teamed up with engineering firm Arup to install a bright red bridge across Regent’s Canal in London, forming a new route into the Thomas Heatherwick-designed Coal Drops Yard.

Esperance Bridge is a pedestrian-only crossing, positioned to line up with the natural walking route from King’s Cross and St Pancras stations towards Granary Square and areas to the north.

It boasts a folded truss form, designed by Moxon Architects and Arup to reference an old railway bridge installed in this exact location in the early 19th century.

The bridge is one of three river crossings that featured in the original masterplan for the Coal Drops Yard shopping complex, which opened in 2018.

Three years later, it becomes the last of the trio to be installed. The first was the wide road bridge – now also pedestrianised – at the southeast corner of Granary Square, while the second was Somers Town Bridge, a pedestrian crossing heading west towards the Camley Street nature reserve.

Robert Evans, CEO of the King’s Cross development, described Esperance Bridge as “one of the final pieces of the public realm jigsaw”.

“There was bit of debate internally about whether the third bridge would be required,” he told Dezeen, “but to my mind, it was always a bit of a no-brainer.”

“With areas opening up to the north and west of Coal Drops Yard and new occupiers moving in, there is a really natural desire line to come down to Granary Square and track over a new bridge that leads you down towards the station,” he continued.

“It took us a while to get to it, but we’re really proud to have done it.”

Having previously developed a simple, elegant design for the steel-plate Somers Town Bridge, the Moxon Architects and Arup team wanted to make more of a statement with Esperance Bridge.

The bridge’s smooth truss form is created with folded ribbons of carbon steel, a material that gives the structure increased strength.

Manufactured by specialist steelwork fabricator SH Structures, the bridge is painted red to help it stand out. There is also integrated lighting designed by Studio 29.

“Inspired by the area’s industrial heritage, the bridge’s articulation is expressive and sculptural,” said Ben Addy, founder of Moxon Architects.

“We’re even making use of the existing remnants of foundations, of the utilitarian crossbridge that was there before,” he revealed. “So we’re actually recycling structure too.”

Esperance Bridge opened to the public in July, shortly after the unveiling of Adam Nathaniel Furman’s Proud Little Pyramid, an installation designed to celebrate the reopening of King’s Cross following coronavirus lockdown.

While Covid-19 inevitably had an impact on the businesses in and around Coal Drops Yard, Evans said that the area had not completely suffered in this period. He observed that it became a popular destination for exercise, dog walking and coffee meet-ups during the pandemic.

Evans attributed this success to the quality of the outdoors spaces on offer and hopes to continue to build on it going forward.

“The quality of the public realm has become even more essential post-Covid,” he said. “If people are going to be attracted to come back into central London, we need to offer them ease of connection, and variety and choice in the environment.”

He believes the bridge will bring more people into Coal Drops Yard and help to improve the overall experience.

“It isn’t really about how many people use the bridge,” he said, “it’s about the quality of the experience.”

“People like to arrive somewhere where this is more than one route to explore. That’s why well-connected places perform better.”