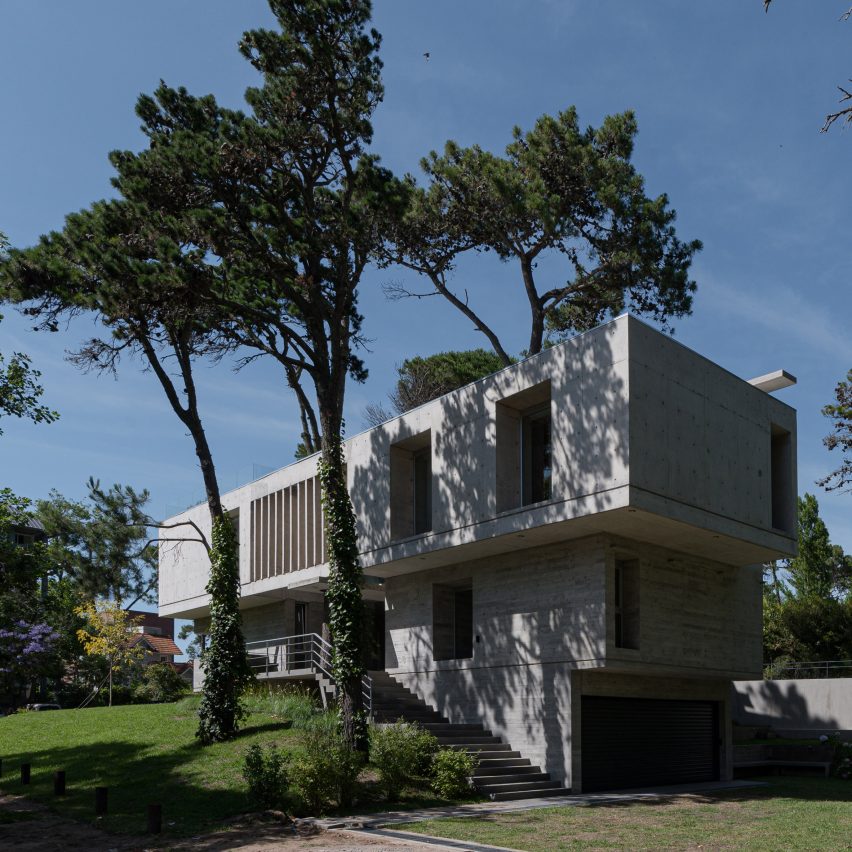 Architecture office Estudio Galera has formed the Casa Jacaranda holiday home on the coast of Argentina by stacking and rotating concrete boxes that step out on every floor.

Located in the beach town of Cariló, the monolithic concrete home was configured as several distinct volumes that are stacked and angled relative to one another, reflecting the interior use of the space. According to local firm Estudio Galera, this arrangement provides more flexibility, while adhering to the area’s strict zoning regulations.

“A game of boxes is devised as a project strategy since it allows for grouping, stacking and skewing; boxes that can grow, shorten, expand or comprise depending on the need,” said the firm in a project description.

“This exercise generates great flexibility and ensures versatility on the project proposal.”

The lowest level is also the smallest, as it serves only to access the rest of the house. An exterior staircase along the main facade, facing Jacaranda Street, leads upstairs to the main kitchen, living, and dining area.

On this level, two volumes intersect. One contains a bedroom, while the other is for the home’s communal spaces, which are laid out in an open-concept configuration.

Full-height sliding glass doors open towards the back of the house, where there is a rooftop pool framed by the L-shaped building. “Contrasting with the connection to the street, the strategy in the interior is of a full opening, both in the treatment of the shape and in the space delimitation,” the architects explained.

Because of the shifts in the floor-plates’ size and orientation, covered walkways and terraces are created throughout the home, which allow residents to enjoy the outdoors for more of the year.

The top floor contains three additional bedrooms, which face the street, as well as a multifunctional room overlooking the back yard and pool.

“The structural logic is inverted due to the needs of the program, stacking the boxes, from the smallest one which is buried to the largest ones on top,” said the architects.

Most of the construction is made of cast concrete, which was finished with different types of formwork that imprinted various textures into the material. For instance, some walls have a pattern of horizontal boards, while others bear the mark of sheets of plywood, like the floor slabs.

Estudio Galera describes concrete as “a material that never ages and which does not require great maintenance since it looks as it is from the very beginning,” adding that it is both “simple and imperfect.”

The architects also preserved some of the existing trees on site, forming the structural concrete elements around their trunks and integrating them into the architecture.

Other projects in Argentina include an apartment building in Buenos Aires by BBOA that is covered in light pink bricks and a residence by PSV Arquitectura that combines natural stone with long concrete beams.

The photography is by Diego Medina.