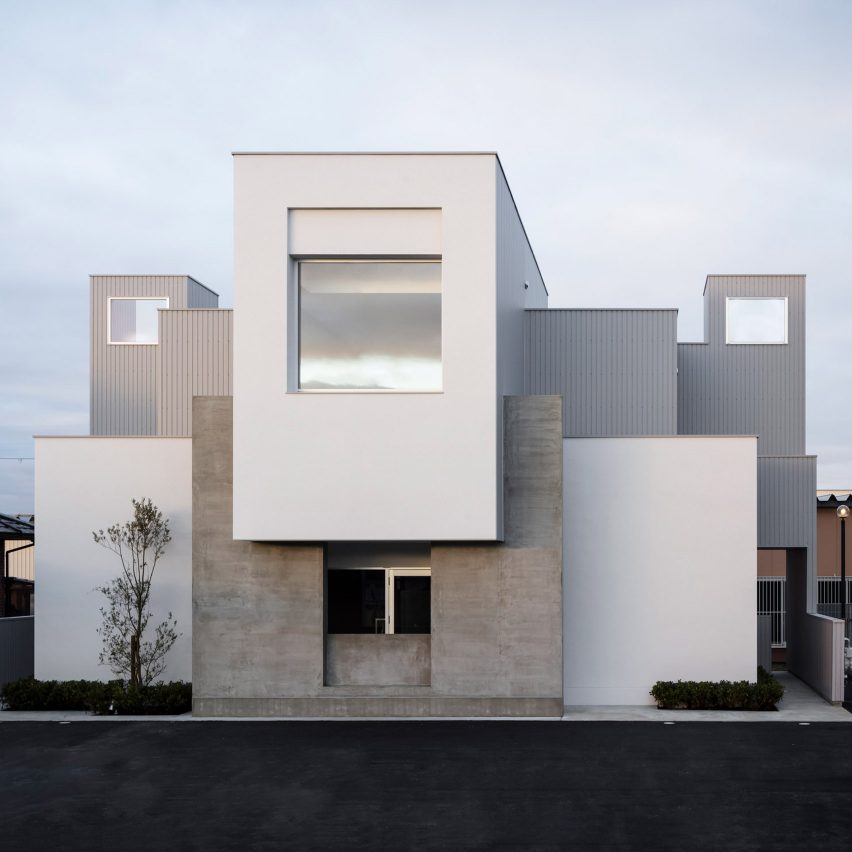 The cluster of concrete, white-rendered and metal-clad forms has been arranged symmetrically, oriented to allow a large window in the projecting living room to frame dramatic views of Mount Ibuki.

“The building is composed of symmetrical volumes for which the proportion, openings and materials have been carefully considered… the dynamic form creates a new facade in the streetscape,” said FORM/Kouichi Kimura Architects.

On the north-facing front of the building a monolithic concrete wall stands apart from the ground floor, intersecting with the white volume of the living room above.

Behind this wall, framed by a small opening, is a dedicated entrance to the ground-floor salon, which occupies an independent unit that is not connected to the home.

Two private routes wrap around the sides of the building, partially covered by the overhanging metal-clad blocks above. On the eastern edge this leads directly to the salon’s storage space, while to the west it leads into an entrance hall for the home.

Lined entirely on one side by a silver curtain, this hall steps upwards from a concrete area for shoes and coats towards a bathroom, utility and storage spaces. From here, a staircase leads to the bedrooms and living spaces above.

The symmetrical, T-shaped upper floor contains a central living, dining and kitchen area with three bedrooms, a bathroom and a closet arranged at either side.

A built-in form of cast concrete defines this living space, extending from the staircase balustrade to become seating, shelving, cabinets and window frames. It also supports thin white curtains that can be used to separate certain areas.

“The living space has varied ceiling heights, and has been planned to make the room – including the stair hall – one continuous space, which can be loosely divided with curtains if necessary,” described the studio.

At the northern end of the living room a large window sits at a high level above a recessed seating area illuminated by a warm light, contrasting the distant views of Mount Ikubi with a “huddled and cosy” space.

This large window, along with picture windows at the opposite end of the home, draw light into the spaces, which are finished with white walls, pale wood floors and sliding doors to increase the sense of openness.

“This house teaches us that it is a good relationship between the external environment and internal space that gives openness or calmness to a residence,” said the studio.

The photography is by Norihito Yamauchi.