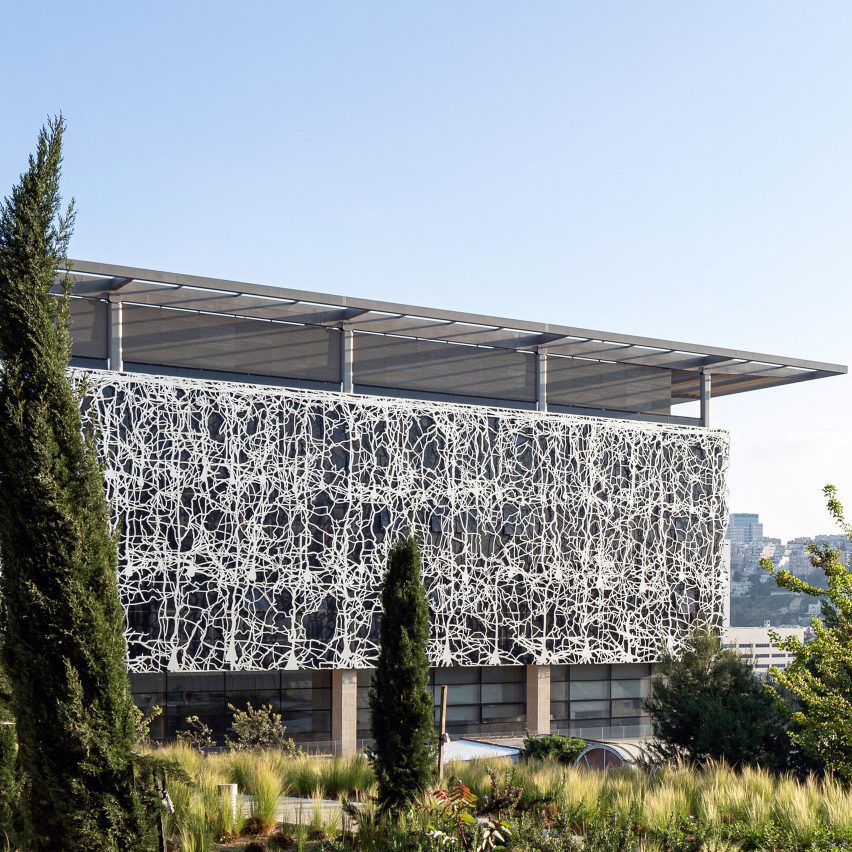 The centre, which sits at the heart of the Hebrew University of Jerusalem, contains social spaces and laboratories dedicated to the scientific exploration of the brain.

It is distinguished by its three upper levels, which are shrouded by screens that Foster + Partners modelled on Spanish neuroscientist Santiago Ramon y Cajal’s drawings of the brain’s neurological structure.

According to the studio, the aim of the building is to “attract exceptional scientists, as well as to foster an interest in the centre’s research activities within the wider community”.

“The project has a progressive social agenda that has been applied at an urban scale, creating a center for research and learning that is truly inclusive,” said partner Darron Haylock.

“The new building is located just off the main pedestrian spine of the university and its facade invites exploration, drawing people inside to learn about the research activities.”

The Edmond and Lily Safra Center for Brain Sciences comprises two wings, positioned on either side of a central courtyard.

It has a reinforced and post-tensioned concrete structure topped by an overhanging steel roof. The aluminium screens are teamed with locally sourced Jerusalem stone cladding, which continues inside the building.

On the ground floor, the centre houses a mix of teaching facilities, alongside a 200-seat auditorium, library, cafe and gallery to display artwork related to the brain.

The upper levels contain twenty-eight laboratories linked by bridges that double as social hubs, introduced by Foster + Partners to “encourage informal interaction and the exchange of ideas”.

A key part of Edmond and Lily Safra Center for Brain Sciences’ design is the flexibility of its laboratories, which are column-free thanks to the post-tensioned structure.

This ensures that they can be easily expanded or closed off to meet the needs of evolving research projects or changing research techniques in the future.

“Understanding the enigma of the brain is the most challenging endeavour of the twenty-first century and research in this area is vital to the quality of life for millions of people,” said the studio’s head of design Spencer de Grey.

“This is one of the most innovative projects of its kind at an Israeli university, with several laboratory complexes that are highly flexible to anticipate and accommodate future change, arranged around an open central courtyard that is at the heart of the scheme.”

The Edmond and Lily Safra Center for Brain Sciences’ central courtyard is lined with 24 grapefruit trees and a stream that runs its length, intended to offer visitors a quiet and reflective space.

It is topped by a retractable roof made from Ethylene Tetrafluoroethylene (ETFE), which will be used to reduce the heating load in winter and maximise natural ventilation in summer.

Decorative metal screens are often used in architecture to help animate a facade, such as at the Bunhill 2 Energy Centre in London, where Cullinan Studio used them to reflect the activity inside the heat network.

However, they can also be used to help control the flow of light, air and views throughout a building, such as in the AB House by Israeli architect Pitsou Kedem.

Foster + Partners was founded by Norman Foster in London in 1967. The studio also recently completed the PGA Tour HQ in Florida with an oversized roof and opened an Apple in Los Angeles’ historic Tower Theatre.

The photography is by Harel Gilboa.