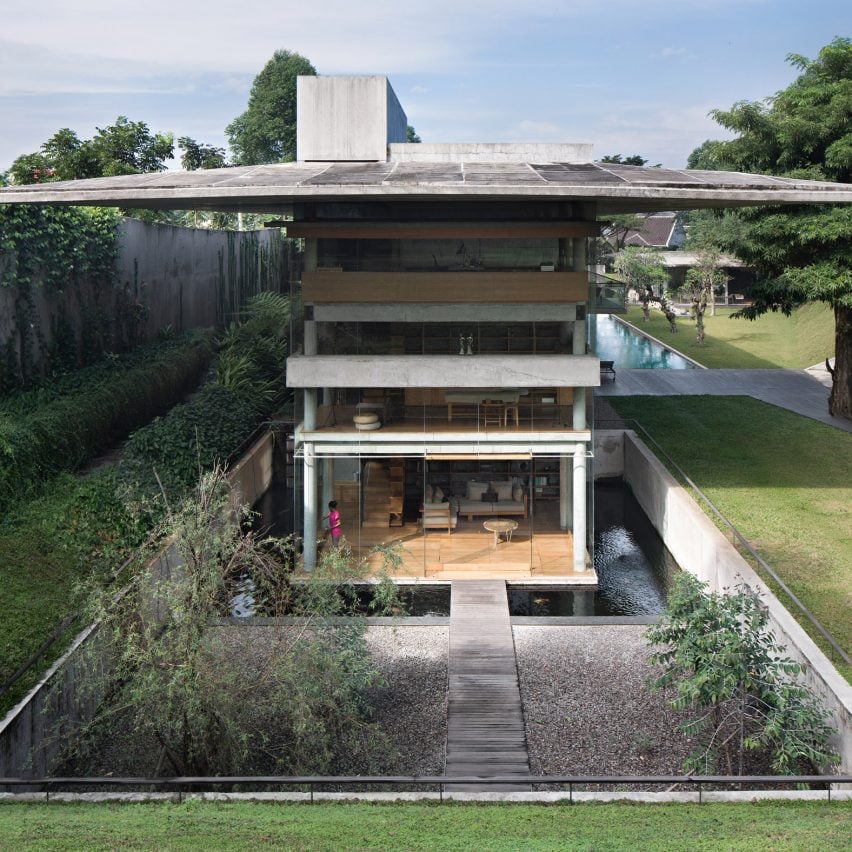 Designed by Andramatin as a reinterpretation of Dutch colonial manor houses, the home creates contrasting connections to the site’s sloping gardens through a series of sunken pools, ramps and bridges.

At the centre of the plot sits a narrow, concrete-framed block, with the living spaces and children’s bedrooms housed in a largely glass-walled ground floor and the main bedrooms above.

With Bandung receiving high levels of rainfall and to shield the glass walls and shade the pools below, a vast concrete roof with eaves of up to five metres tops this central block. The roof is elevated slightly to create a shadow gap between the two.

Creating different degrees of openness, the home has been exposed to the west with glass walls overlooking a series of pools. To the east and on the first floor it is more closed-off to bring greater privacy to the bedrooms.

“The house has quite an abundant amount of functions, but still retains the vastness of the landscape,” said the studio. “The large mass of the building is balanced with an optimal size of terraces, and wide pools built all across its perimeter.”

To the south is the large living and dining area, wrapped entirely by glass walls that are framed by the structure’s concrete columns and overlook the pools and ponds that surround it.

At the back of the home to the north, a double-height library sits above a sunken koi pond, crossed by a wooden patio that leads to further garden spaces.

At the centre of the home are the children’s bedrooms, accessed via a series of large wooden doors running along a sheltered external corridor on the home’s eastern edge.

Above, concrete walls surround the more private main bedroom level, with a balcony extending over one of the pools and sheltered by the home’s large roof.

Connecting to the living and dining, the kitchen is part of a sunken “facilities area” to the south containing five rooms for the home’s staff.

This section sits alongside a large garage and parking area. A thin ramp provides access to the home through a small gap in a concrete wall that visually separates the facilities block from the main home.

Crossing the pools alongside the main home leads to an independent block at the west of the site, which contains guest spaces alongside a gym, salon and billiards room.

Other recently featured concrete homes include a holiday home in Argentina by Estudio Galera and The Rock, a home dug into a rocky outcrop in Canada by Gort Scott.