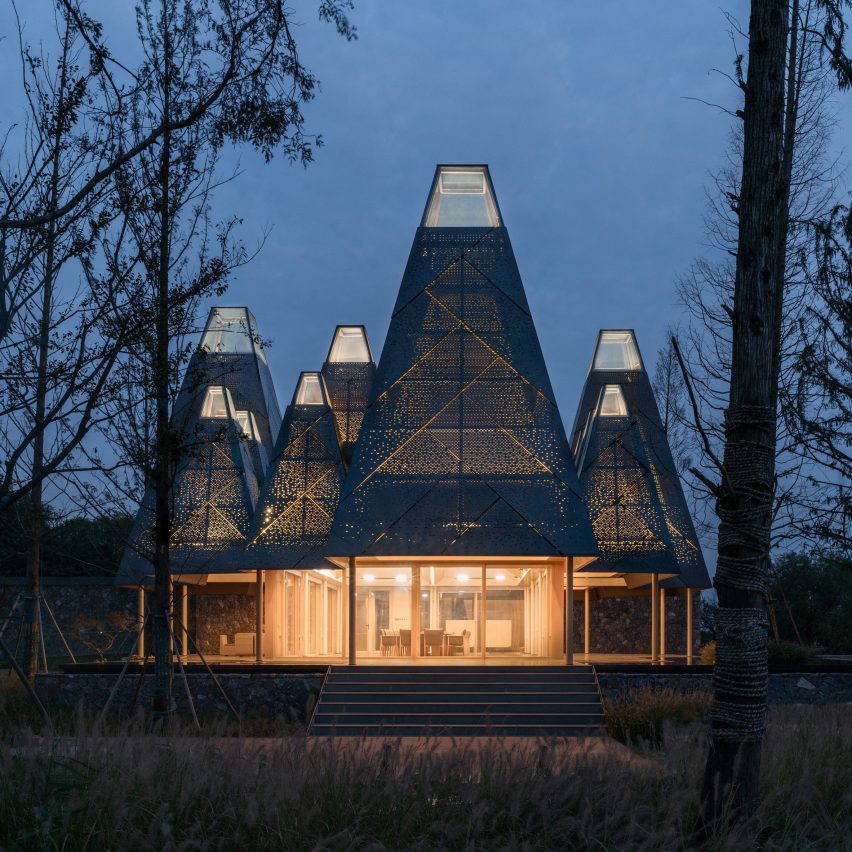 Chinese studio Group of Architects has created a restaurant topped with a canopy made from a series of aluminium pyramidal forms in the village of Suzhou, China.

The structure, which was informed by a grove of metasequoia trees, was designed by Group of Architects (GOA) for a waterside site in China’s Jiangnan region.

“We want the design of Metasequoia Grove Restaurant to integrate into its natural setting and become a part of the landscape,” the project’s leading architect Chen Binxin told Dezeen.

“The forms of the metasequoia trees are abstracted and translated into a purely geometric architectural language, a pyramidal frustum.”

Multiple versions of the pyramidal shape in three different scales form the forest-like canopy that tops the restaurant.

Skylights top each pyramidal module, letting light enter the interior, while short eaves at the canopy’s base frame views across the surrounding wetland.

“We chose steel columns to respond to the density and verticality of tree trunks and perforated aluminium panels as the roof canopies’ outer layer to imitate the dancing sunlight spots and shadows that filter through leaves,” said Chen. 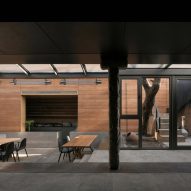 C+ Architects mingles old and new inside Restaurant Ya in Beijing

Kitchens and private dining balconies are located in the restaurant’s eastern wing, which is wrapped in a rubble stone facade.

In an effort to emphasise the lightness of the structure, the studio designed the building to have only 10 load-bearing columns, which have been arranged around the edges of the space. Opposite each of the load-bearing columns is a group of three columns along the window frames.

By adding the same paving to the interior and the waterside terrace, the studio aimed to create a cohesive aesthetic across the restaurant and its exterior.

Set to open in October, the restaurant will be used as both a dining space for visitors and a small banquet hall for holding public events.

It is part of a larger governmental scheme for the redevelopment of Shanwan village, which will include a B&B also designed by the studio, currently under construction. The proposed development includes guest rooms, additional restaurants, an outdoor events space and a pool, alongside preserved residential houses and forests.

“As architects, we want to increase the recognition and attention to this village by reinforcing a sense of local identity through the design and turning this project into an attractor to promote the local ecotourism industry while activating the surrounding areas,” said Chen.

Metasequoia Grove Restaurant by Group of Architects has been longlisted in the hospitality building category of Dezeen Awards 2022.

Other restaurants in China featured on Dezeen include Cheng Chung Design’s restaurant inside a brick art installation and a 0321’s restaurant containing a florist enclosed in a translucent pink box.

The photography is by In Between.