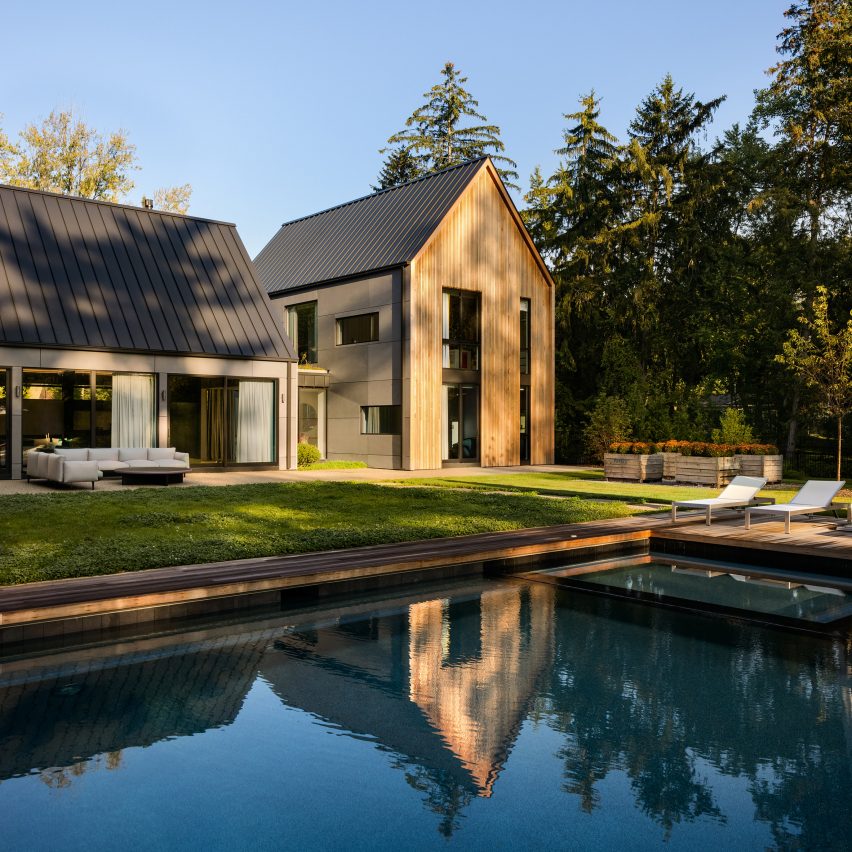 A cluster of gabled pavilions clad in grey panels and golden-toned cedar form a Michigan home for a creative family designed by architecture firm Iannuzzi Studio.

Designed to balance elegance and playfulness, the Briarcliff house was built for a growing family that loves the performing arts.

The architects incorporate ideas from the Harry Potter novels, specifically the concept of things being hidden from plain sight.

The hilly topography offers privacy and a sense of discovery as one approaches the home. It also aids in the client’s request for an “unplottable” residence.

“This is a concept that runs throughout the Harry Potter stories of a building or place that is enchanted to a point that it is magically concealed or hidden from plain sight,” said Detroit’s Iannuzzi Studio.

The architecture studio looked to the context and the region’s vernacular buildings while conceiving the project.

“The home’s design was inspired by the classic form of rural Michigan farmsteads – collections of gabled-roof structures built over generations,” said the studio.

“These familiar forms connect the home to its historic context but are articulated with modern building techniques and innovative detailing.”

The house consists of four volumes, each rectangular in plan and topped with a steep, gabled roof.

The largest volume is single storey and sits on a north-south axis. Two wings run perpendicular to it on both ends; one rises two levels, and the other is one storey.

The fourth pavilion is set off to the side and overlooks a swimming pool and integrated hot tub.

“The layout of clustered pavilions creates a sense of the building unfolding as it is experienced,” the team said.

“The siting was minimally disruptive to trees, and in particular creates a feature of a 100-year-old American elm and climbing hydrangea.” 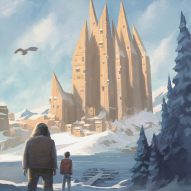 Pitched roofs are covered with standing-seam metal in matte black. The connector pieces between volumes have flat green roofs that are planted with native grasses.

The use of structural insulated panels (SIPs) for the roofing helped bolster the home’s R-value and improve energy performance, the team said.

Exterior walls are clad in grey fibre-cement panels and vertical planks of unfinished cedar that”accentuate the height and stateliness” of the gabled form. The siding is installed as a rainscreen, which allows air to move behind the cladding, in turn helping ventilate the building.

From the perimeter of the site, the house appears nestled behind several knolls, which have been “sliced” with Corten steel retaining walls.

The home’s foyer, rather than being prominently located, is tucked quietly between two pavilions and offers views of the backyard.

Within the residence, there is a separation between public and private areas.

The central volume – the Entertaining Pavilion – holds the communal spaces, while the other pavilions contain more private areas, including bedrooms, an office and a music room. The volume on the south holds a garage.

Large stretches of glass offer a strong connection to the verdant landscape.

“The outside is constantly invited into the home, for an ongoing conversation among the modern exterior, the warm interior and the natural surroundings,” the team said.

The communal space features a vaulted ceiling and exposed steel bents that lend a rustic touch. Cedar and blued steel were used to form a floor-to-ceiling partition that has an integrated television and double-sided fireplace.

Throughout the dwelling, the team incorporated exuberant moments, such as rainbow carpeting on the stairs and multi-coloured patterned tile in the main bathroom.

Overall, the team created a “house in two acts”.

“It balances an elegant form and façade with a dramatic, playful interior – fitting for a private, close-knit family passionate about music and theater,” the team said.

Other residential projects in Michigan include the X-House by Snow Kreilich, which has wings intersecting at an irregular angle, and a second home for a Chicago family that features materials such as charred cedar and slate.

The photography is by Rafael Gamo.