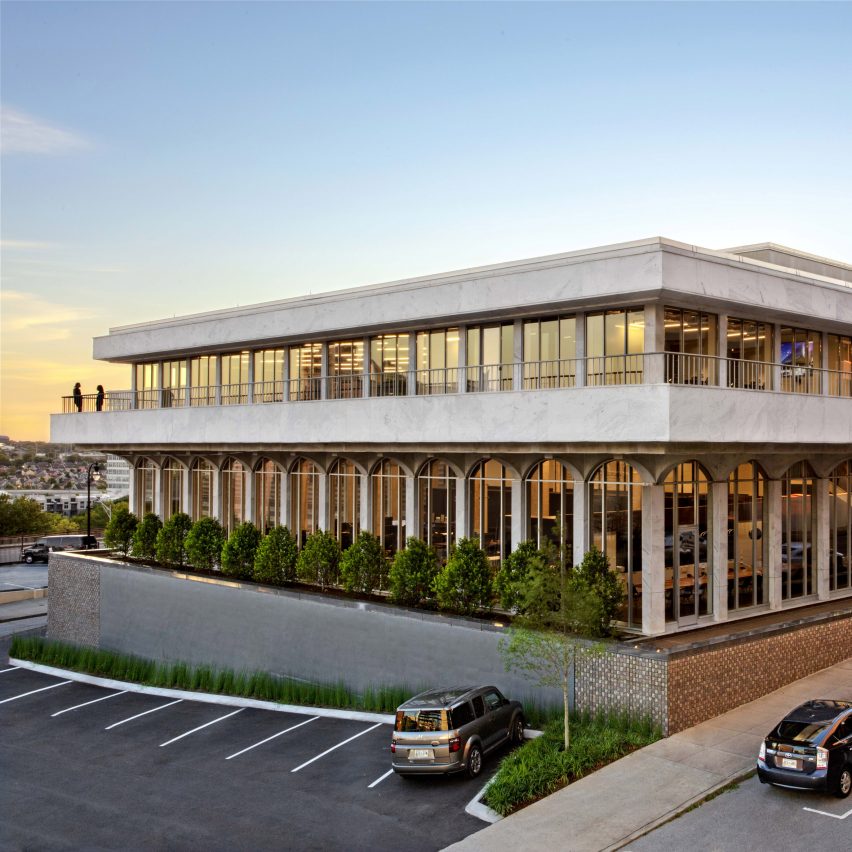 Tall, arched windows and marble cladding feature in a mid-century building in Tennessee that has become the new home of American firm Hastings Architecture.

Named after its address in downtown Nashville, 225 Polk Avenue, the project entailed the transformation of a 1965, modern-style building that was originally designed by architect Bruce Crabtree.

“After the library was relocated in 2001, the site fell into a state of disrepair,” said local firm Hastings Architecture, which was founded in 1985.

The firm’s partners bought the vacant building in 2017 and set out to revive it. Today, it houses a 24,000-square-foot (2,229-square-metre) studio for Hastings Architecture, along with offices for United Talent Agency and the architecture firm McAlpine.

“Hastings saw in the library an opportunity to create a striking space for its growing firm, and a chance to revitalise an important historic landmark in the community,” the firm said.

The project entailed a merging of old and new. The team refurbished certain historic details while also introducing contemporary elements.

The exterior’s Georgia Cherokee marble panels were cleaned, and where necessary, swapped out with new pieces from the original quarry. The glazing in 16-foot-tall (4.9-metre) arching windows was replaced with high-performance, insulated glass.

Inside, the floor plan was reconfigured to provide a more open atmosphere and to create space for multiple tenants.

The team refurbished the terrazzo floor in a central lobby, along with a terrazzo-clad stair connecting the building’s two main levels.

The lobby connects to Hastings’ office, which is found on the south end of the building. The ground level consists of a light-filled studio with a 20-foot-high (six-metre) ceiling.

Upstairs, the team placed meeting rooms, a materials library, private offices and more studio space. Employees can step outside and take a break on a wraparound balcony.

A black-and-white colour palette was used throughout the space. Walnut accents take cues from the original design.

“It was important that we honour the architect’s original intent in our design plans,” said David Bailey, a partner at Hastings. “We wanted to celebrate the history of the building by restoring as much as we could, and keeping the space open to highlight the original interiors of the building.”

The talent agency and the other architecture office are found on the north side of the building.

Just off the lobby, an auditorium was converted into a 1,500-square-foot (139-square-metre) multipurpose room that is accessible to the public and nonprofit groups. The space, called The Athenaeum, can accommodate up to 300 people and honours the building’s past as a civic facility.

Other adaptive reuse projects in the US include Studio Gang’s conversion of a Wisconsin power plant into a student union, and Skolnick Architecture’s transformation of an 1830s Hamptons church into an arts centre.

The photography is by Eric Laignel.

The post Hastings Architecture converts 1960s Nashville library into its own headquarters appeared first on Dezeen.