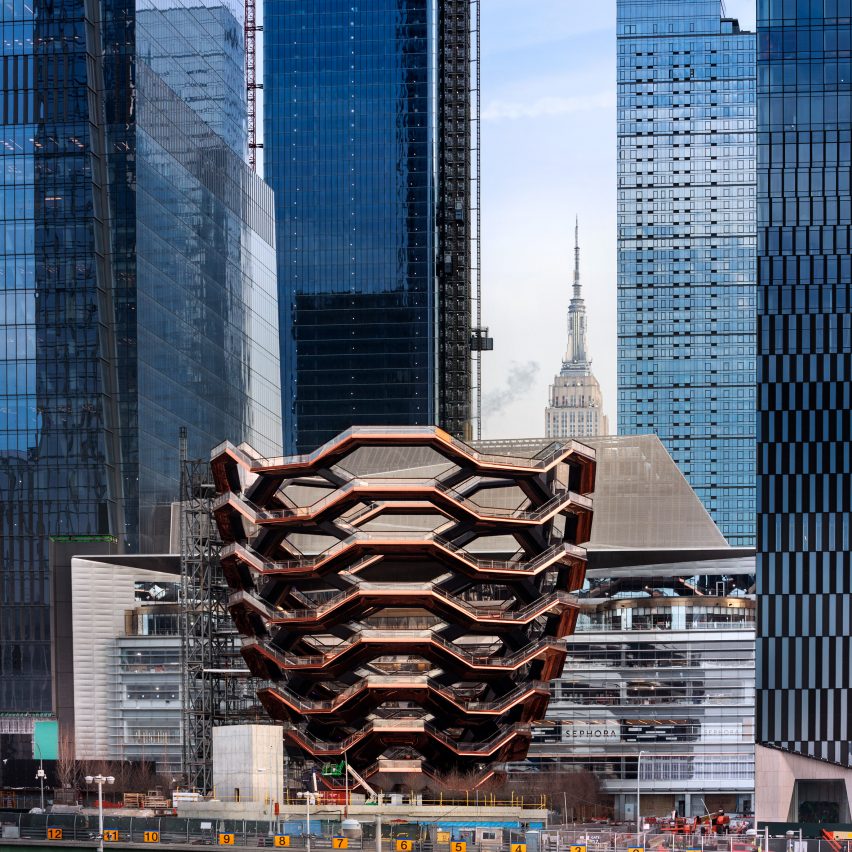 The Vessel viewpoint at New York’s Hudson Yards has temporarily closed after a fourth person died by suicide after jumping from the Heatherwick Studio-designed structure.

The attraction is currently closed after a 14-year-old boy jumped from its eighth floor last Thursday, just two months after the viewpoint reopened with new measures in place to prevent suicides.

It is the fourth suicide at the tourist attraction designed by British designer Thomas Heatherwick’s studio since it opened in 2019.

The Vessel is a honeycomb-shaped attraction composed of 154 staircases that meet at 80 platforms that was built as the centrepiece of the Hudson Yards development.

It reopened to the public on May 29 after being closed for four months. Among the measures introduced in the suicide-prevention overhaul was a buddy system that prevented people from entering the attraction alone.

“Vessel was envisioned as a shared, immersive design experience,” said a spokesperson for Hudson Yards developer Related Companies at the time.

“Requiring visitors to attend in groups of two or more significantly enhances the safety of the experience.”

Signs with the National Suicide Prevention Hotline number were also fixed along the walkways and on tickets. However, the height of the railings around the structures, which are chest-high, have not been altered.

Structure may not reopen

Following the latest suicide, reports suggest that Related Companies chairman Stephen Ross is considering closing the structure permanently after he told the Daily Beast: “we thought we did everything that would really prevent this”.

However, Lowell Kern, the chairman of the local community board disputed this claim and said “they could have raised the height of the barriers”.

Concerns about the potentially climbable barriers were raised as early as 2016, such as when Audrey Wachs of the Architects Newspaper said: “when you build high, folks will jump”.

The January closure followed the death of a 21-year-old man at the structure.

In December 2020, a 24-year-old woman from New York died after jumping from the structure, following the suicide of a 19-year-old man in February 2019 before the structure’s official opening.

Alongside concerns about its safety, the building has also attracted criticism over its aesthetic, for being a privately-funded development and the fact that Hudson Yards owned the rights to photographs taken at the structure.

In 2019 Heatherwick defended the project in a talk with Dezeen stating that people “shouldn’t underestimate what it takes” to build public spaces with private money.

The photography is by Michael Moran for Related Companies.