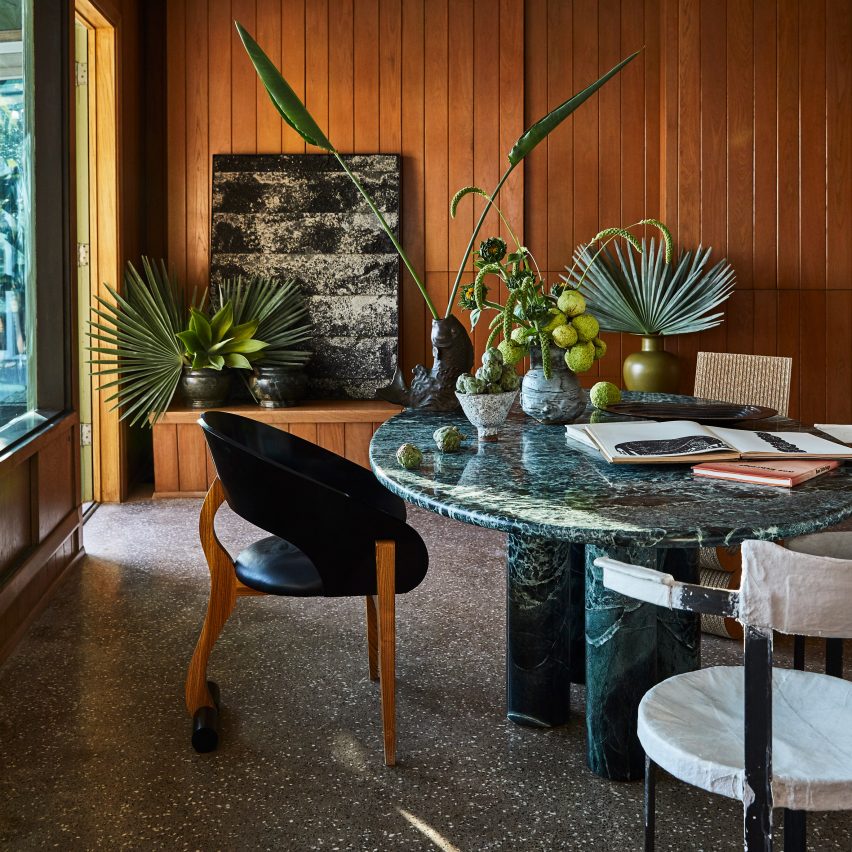 Interior designer Kelly Wearstler has transformed a 1950s beachfront cottage in Southern California into a bohemian retreat for herself and her family.

The project, called Malibu Surf Shack, entailed an interior renovation of a 1953 four-bedroom dwelling that was designed by an unknown architect. The wood-clad house is located in Broad Beach, which stretches along the Pacific Ocean.

Encompassing 4,254 square feet (395 square metres), the house was formerly owned by the American actor Carroll O’Connor, who played Archie Bunker in the 1970s television series All in the Family.

The property had been on the market for several years when Wearstler – who leads an eponymous studio in LA – decided to rent it for use during the summer. She set out to create a cosy live-work environment for herself and her surf-loving family.

The home sold after the owner photographed it with Wearstler’s decor.

“I initially learned about the property through a friend who had stayed nearby three years ago and took me over to take a look,” said Wearstler. “It was an architectural gem – a hidden, surf shack.”

Wearstler took cues from the property’s original details, including Japanese shoji screens. The home’s wooden wall panelling was retained, but its shag carpet was replaced with seagrass.

Rooms were filled with an eclectic mix of vintage and contemporary pieces.

“I took inspiration from the house’s architectural shell – its earthy and rustic tones,” the designer said. “I wanted to choose objects that were hand-crafted, rustic and raw.”

In the entryway, a bronze and leather bench by Chuck Moffit is paired with a chunky, blackened-wood console from the LA studio Base 10. Under a stairway, one finds a steel chair draped in white plaster – a piece by Austrian designer Lukas Gschwandtner.

In the living room, Wearstler placed a Soriana Sofa by Afra and Tobia Scarpa, and a 1950s lamp by American designer Mitchell Bobrick. The dining area – envisioned as a light-filled solarium – features an Isamu Noguchi pendant, Danish mid-century chairs, and a table adorned with foliage in vintage fibreglass vessels and earthen planters.

The plants include locally foraged sanguisorba, castor and tilandsia, which were sourced and arranged by LA florist Sophia Moreno Bunge.

The family room is dressed with lounge chairs by Ilmari Lappalainen, a tapered side table made of iroko wood, and cubic coffee tables finished in tortoiseshell. A 1980s green marble table by Mario Bellini is found in Wearstler’s office.

A bedroom features light colours and casual decor, including linen bedding, a vintage nightstand, and a table lamp made of plaster and paper mâché. A lounge chair by Ryan Belli, which has a wooden base and a sculptural seatback, adds a bit of whimsy to the space.

The home has an abundance of plants, both inside and out, which were selected by Wearstler in collaboration with Bunge, the landscape designer Art Luna and the nursery Inner Gardens.

Other projects by Wearstler include an Austin hotel that features vintage rugs and a distinctive white oak staircase, and a San Francisco hotel with clashing colours and patterns.

Earlier this year, the designer released a conceptual design for a garage meant to house LeBron James’s electric Hummer.