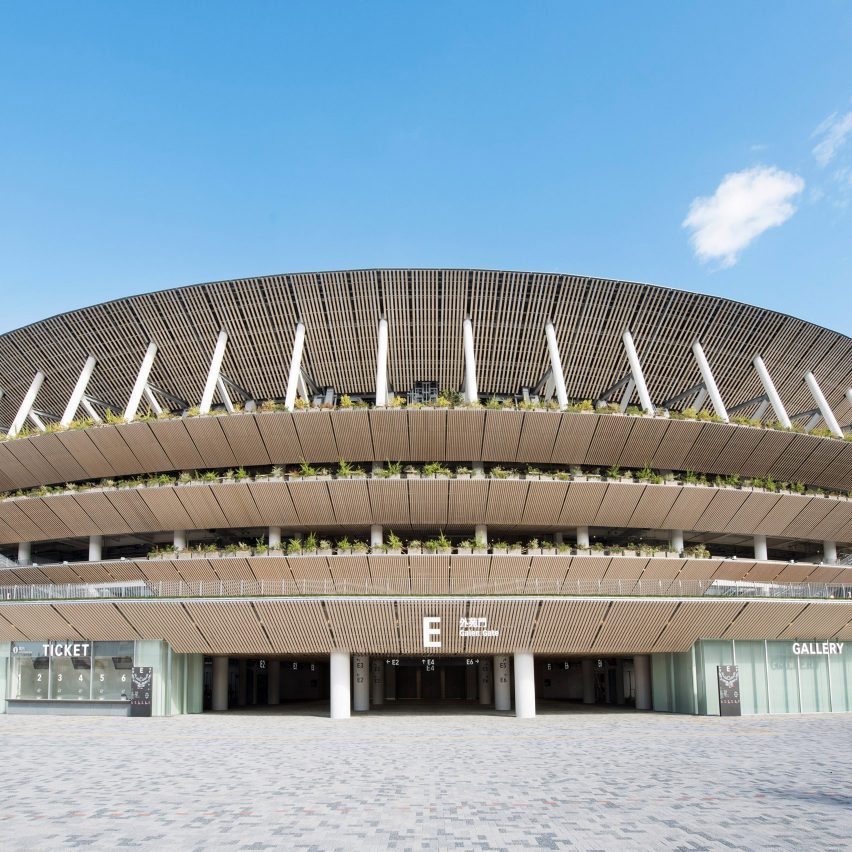 Cedar panels clad the eaves of the 68,000-seat Japan National Stadium, which Japanese studio Kengo Kuma and Associates designed for the Tokyo 2020 Olympics.

The structure in Tokyo’s Meiji-Jingu Park by Kengo Kuma and Associates with Taisei Corporation and Azusa Sekkei Co hosted the games’ opening ceremony last week and is set to host the track and field athletics events at both the Olympics and Paralympics.

Completed in 2019, ahead of the coronavirus-postponed games, the stadium takes the form of a large oval.

Its main structure is made from reinforced concrete and steel, sheltered by a roof structure made of steel with laminated larch and cedar trusses.

The roof is punctured with a huge oculus above the track but cantilevered to shelter three tiers of spectators seats.

Behind the seating are the circulation areas, which wrap the edges of each level and contain 47,000 plants. This greenery is visible externally and was designed to help the stadium blend in with the surrounding green environment.

To reduce the visual impact on the site, the stadium height was minimised by combining a flat roof and a compact arrangement of seats.

Externally, the structure is distinguished by a series of eaves that are clad in cedar collected from each of Japan’s 47 prefectures.

The eaves were designed by Kengo Kuma and Associates as a contemporary interpretation of the overhanging eaves of traditional wooden Japanese buildings.

They also offer functional benefits, keeping out the sunlight and rain while encouraging air to circulate and prevailing wind to enter. This helps to cool the building in hot weather in tandem with airflow-creating fans and a mist-cooling system.

Wood also features inside the Japan National Stadium, where it lines the interior spaces to help create a warm and tactile environment. It has also been used to furnish the athletes’ dressing rooms and to create benches in recreation spaces.

The stadium is complete with more than 450 places for wheelchair users, solar panels on the roof that generate electricity and rainwater collection points in underground cisterns that are used to irrigate the arena’s greenery.

The Japan National Stadium featured in our roundup of architecturally significant venues hosting the games alongside structures by Japanese architects Kenzo Tange and Fumihiko Maki.

We also featured the stadium during Dezeen’s Virtual Design Festival last year, when architecture video blogger Martin van der Linden described it as “quite simple, and definitely not iconic”.

When Japan National Stadium was first revealed in 2015 it became mired in controversy as it replaced a proposal by UK architect Zaha Hadid that was scrapped over rising costs and opposition.

It came under fire again in 2017 as tropical hardwood linked to deforestation and human rights violations was used as a mould for its concrete elements. This is one of the reasons the Tokyo 2020 Olympics has been accused of greenwashing by promising to be the greenest Olympic event ever.

The photography is courtesy of Japan Sport Council.

The post Kengo Kuma's Japan National Stadium is the centrepiece of the Tokyo 2020 Olympics appeared first on Dezeen.