London studio Knox Bhavan has created a prefabricated, flood-resilient house on the bank of the River Thames in Buckinghamshire, which is designed to be “future-proof” for at least the next 100 years.

Raised above a floodplain on steel stilts, the single-storey March House replaces a former 1920s home in a row of summerhouses along the river bank close to the town of Marlow, where the client has lived for the past 19 years.

This ensured that it was lightweight and quick to assemble with minimal waste.

“The new house replaces a two-storey detached house, which was poorly built and presented an obstacle to the flow of water when the river flooded,” said the studio.

“The design deploys flood resilience strategies to make a sustainable home which will withstand the site’s predicted increased flood risk for the next 100 years, presenting a viable design solution for building on sites susceptible to flooding.”

Constructed using oriented strand board (OSB), the cassette structure is clad externally with planks of stained larch, referencing the site’s history as a mooring location for houseboats.

It is elevated on slim galvanised steel stilts that are fixed onto concrete piles, negating the need for a concrete slab and creating the illusion that the house “hovers in the landscape”.

A large wooden staircase provides access up into the home, leading to a skylit living, dining and kitchen space at its centre with high ceilings and a fully glazed wall overlooking the river.

Two bedrooms sit on either side of this area, also with views of the river. One is used by the client and the other is designed for guests. They are accompanied by a fitness room to the east and a studio space to the west.

“The client’s suite is furthest from the entrance and painted in dark colours to create a cosy, intimate and enveloping space,” said Knox Bhavan.

“The guest suite is accessed by a small lobby so that it can operate as a separate wing if occupied by a companion or carer in the future.” 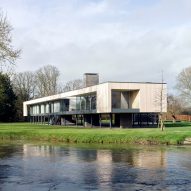 An orchard and river garden originally planted by the client now surrounds the home, with a new boathouse and galvanised steel shed complementing the main building. A path of wooden decking wraps three sides of the dwelling, connecting to a small wooden jetty on the river.

The interiors of March House have been designed as a simple backdrop to both the river views and the client’s collection of Danish mid-century furniture and art.

While the site’s services were previously limited to electricity, the project involved the introduction of a borehole for drinking water and a dedicated sewage plant.

Energy efficiency was also a key part of the brief and was measured with the studio’s own in-house carbon calculator.

The effects of climate change have seen an increasing focus on designs that are not only more eco-friendly but also resilient to extreme weather.

In Wargrave, John Pardey Architects recently created a flood-resilient home that is raised on stilts above a floodplain alongside a tributary of the Thames.

Other climate-resilient homes that feature on Dezeen include the Mt Coot-Tha House in Australia by Nielsen Jenkins and Casa Flores in Puerto Rico by Fuster + Architects.

The video and photography are by Edmund Sumner.