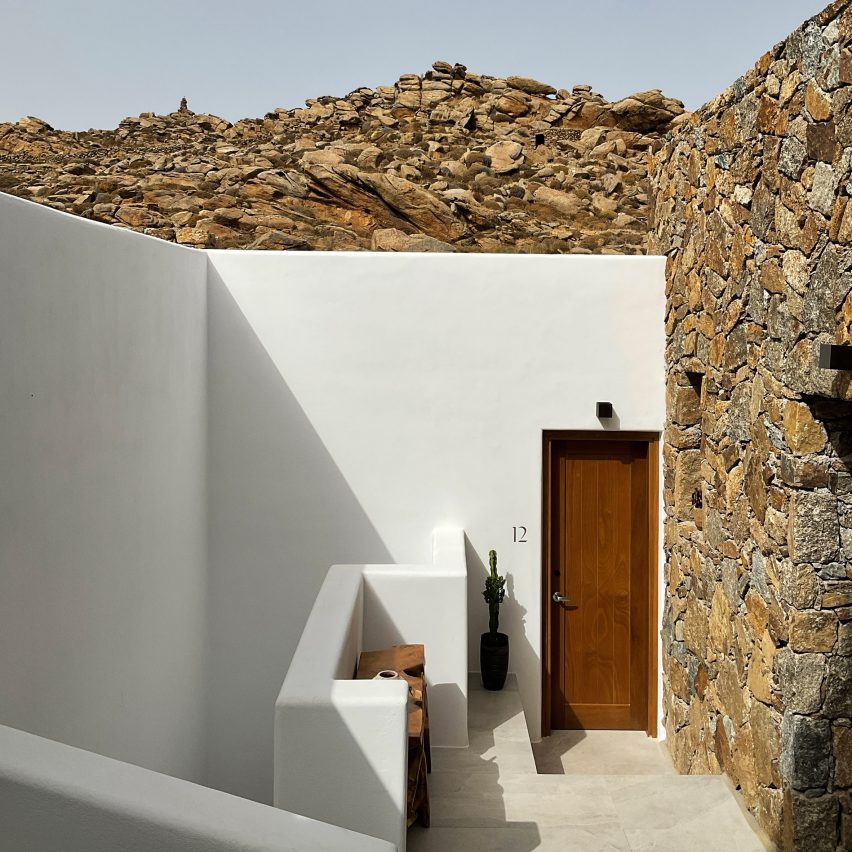 Stone excavated on the site was used to build this wellness hotel for athletes on the Greek island of Mykonos, which was designed by London- and Cyprus-based practice Kyriakos Tsolakis Architects.

Located in the heart of the island, the retreat features 12 suites and two public pools as well as outdoor and indoor gyms, all designed to help professional sportspeople rehabilitate during the offseason and on holiday.

“You can hear the wind in this valley and pretty much nothing else. The client wanted to capture the sense of this place and the colours of the site while using good quality materials.”

Arranged over four levels on a quiet, south-facing hillside, the retreat is in a protected zone that offers views out to the sea. A waterway runs along one side of the site while an old shepherd’s hut and tall grasses surround the property.

The resort’s lower three levels are terraced and embedded into the hillside, with their walls formed from stones that were found during the basement excavations. These were assembled using an unobtrusive technique that reduces the amount of mortar that can be seen from the outside.

Meanwhile, the upper terrace of the complex features the whitewashed walls that the Greek islands are known for.

The studio’s aim was to create a building that is capable of blending into its natural and vernacular context while withstanding the elements.

“Due to the high wind speeds and saline content in the air, the client wanted to minimise maintenance as much as possible,” explained Elena Tsolakis, who founded the studio alongside her siblings Nicodemos and Cassandra Tsolakis.

“So we made sure the materials specified were long-lasting and resilient to the harsh winters.”

Eight of the hotel’s 12 suites are housed on the ground and first floor, where each comes complete with a private garden and turquoise stone pool. The remaining four bedrooms on the upper levels have balconies with far-reaching views, two of which are equipped with jacuzzis.

To further enhance the connection to the landscape, the studio used natural materials such as travertine, slate, cobblestone, iroko wood and bronze across the interior, while the ceiling of the reception and lounge area is made from layers of peeled natural willow.

“The materials we chose give a sense of grounding,” Elena Tsolakis explained. “Nothing is shouting for attention. It’s as though it’s all been here for much longer than it has but with all the comforts that visitors have come to expect.”

“These natural materials complement the vibrancy of the turquoise Bali stone pools to create a rich palette of textures and tones within a valley of boulders and undulating hills.”

Rehabilitation facilities include state-of-the-art gym equipment across both indoor and outdoor gyms as well as hydrotherapy pools and hot tubs for hydromassages, which involve the use of pressurized water jets to ease sore muscles.

Other projects by the family-run firm include an astronomical research centre perched on top of a Cyprus mountain. Under construction since April and due to be complete by autumn 2022, the observatory will provide NASA with information about celestial phenomena.

Photography is by Andreas Bekas and Kyriakos Tsolakis Architects.