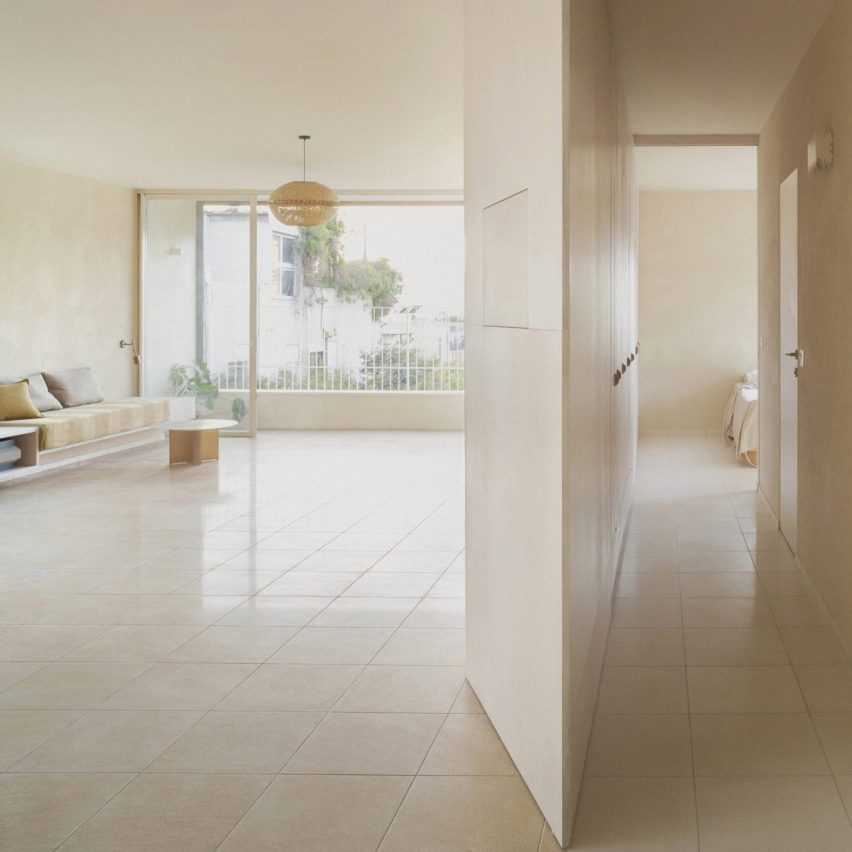 A birch plywood storage volume that resembles an iceberg helps to divide the living spaces inside this Tel Aviv apartment revamped by Laila Architecture.

Decked out in natural materials and pale hues, the Iceberg apartment is designed to be a serene haven in the city for its retired owners.

At its heart now sits an eight-metre-long birch plywood volume, which the practice likens to an iceberg due to its large, angular form.

The volume effectively forms a partition to separate the open-plan living area from the private quarters, creating a narrow corridor that leads to the bedroom on one side.

Here, the unit is fitted with slender storage cupboards while on the lounge-facing side it houses a niche for displaying art, a trio of bookshelves and a hatch door that can be flipped down to reveal a tiny drinks bar.

The apartment’s sizeable open-plan living area integrates a kitchen finished with birch ply cabinetry and an eight-metre-long sideboard that runs along the length of the room.

A sofa is built into one end of the sideboard, while the remainder can provide extra storage, seating or a low table where the owners’ grandchildren can enjoy their dinner.

The apartment’s private quarters are slightly gloomier and contain two beige-coloured bathrooms alongside the principal bedroom which, in keeping with the rest of the scheme, was rendered in natural lime plaster.

As this side of the apartment has less access to natural light, the practice installed brightening white terrazzo floors.

The same tiles also feature on the public side of the apartment but in a warmer sandy hue.

As part of the renovation, Laila Architecture opened up the apartment’s two balconies to give the owners space to indulge in their love of gardening while creating a small buffer between the home and the hot Israeli sun.

Iceberg has been shortlisted in the apartment interior category of this year’s Dezeen Awards.

Other projects in the running include a home in Gdańsk that “gently cocoons” its inhabitants in timber joinery and a live-work space in London belonging to the founders of environmental communication agency Earthrise Studio.

The photography is by Mikaela Burstow.