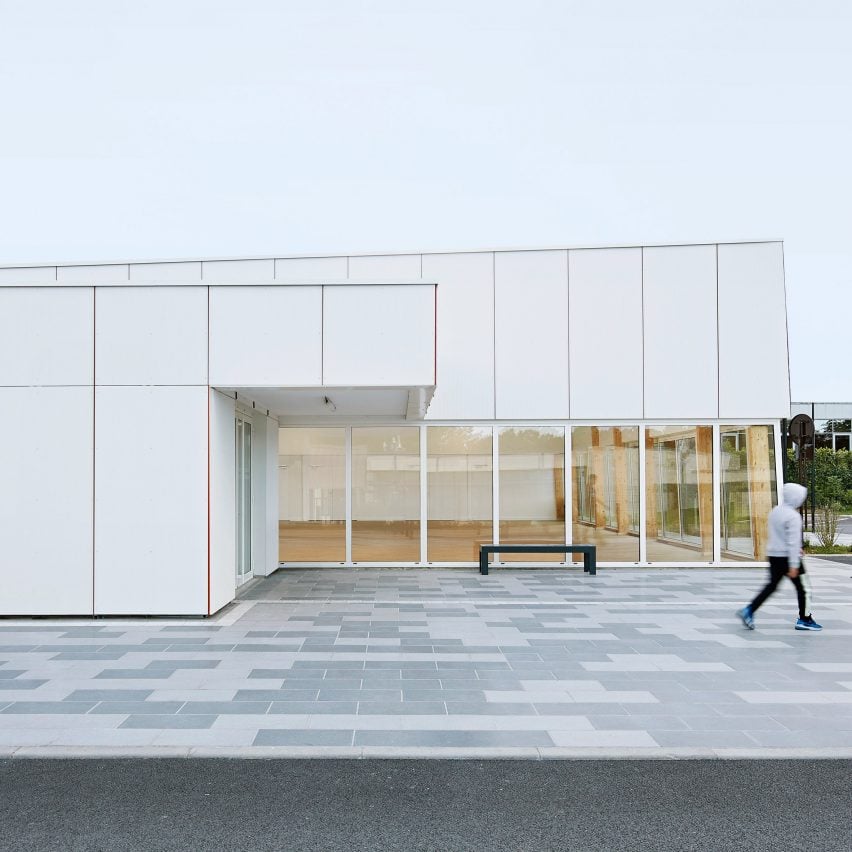 Paris studio Lemoal Lemoal has used hempcrete blocks to build the Pierre Chevet sports centre, which the studio believes is the country’s first public building built from the material.

Named Pierre Chevet, the 380 square-metre sports hall is located in the town of Croissy-Beaubourg near Paris.

Lemoal Lemoal used the building as an opportunity to experiment with hemp as a construction material.

The sports centre contains an exercise hall and changing rooms enclosed in a structure made from hempcrete blocks, which were constructed by cement manufacturer Vicat.

The blocks were made using lime and hemp hurds – an agricultural material produced from hemp stalks, which were grown in France.

The exterior of the building is clad in white, cement-fibre panels that protect the hemp blocks.

Inside, the building has a wooden, half-vaulted structure that is adjoined to the hempcrete walls for support and provides the interior space with a column-free interior.

“This combination frees a maximum of space for practising sports, and allows large opening of two facades to the public space.”

Lower sections of the walls were treated with hemp plaster – a technique typically used across the interiors of hempcrete buildings to conceal the material’s textural quality.

Other areas of the walls were left untreated to reveal the blockwork and aid the building’s acoustic performance.

“By virtue of [hempcrete’s] multiple qualities, hemp blocks makes it possible to avoid the use of linings and to reduce the thickness of the walls to the essential,” said the studio.

“It also makes it possible to increase the practicable surface of the sports hall.”

Hempcrete was chosen for the construction by Lemoal Lemoal for its durability, fire resistance and the fact it is an emerging construction material.

“Hempcrete is very popular due to its high qualities for construction, which is really good news for sustainability,” said the studio.

“We choose to work with hempcrete because this sustainable and long-lasting material has also multiple performances, which allows us to reduce the thickness of the walls and get high quality and spacious interior rooms.”

The blocks used in the building can be assembled dry and have an interlocking system that does not require adhesives or mortar. The hempcrete also removes the need for additional insulation due to its natural insulating qualities.

“The innovation here is not to use hempcrete for a public building but the hempcrete blocks with dry interlocking.”

The studio explained that the sports hall is France’s first public building to use hempcrete blocks and hopes it will encourage others to consider using the material on future projects.

“The Pierre Chevet sports hall is the first new public facility built with hemp-concrete blocks, it helps to engage stakeholders in the building industry in ecological transition and helps to reduce the number of different materials used,” said Lemoal Lemoal.

“The project was notably an opportunity to train a masonry company to this technique. Lighter than a traditional concrete block, but with a similar implementation, the hemp block can convince entrepreneurs to permanently modify their prescriptions.”

Hemp is a carbon sequestering material when used in constriction. Cambridge University researcher Darshil Shah explained that hemp is estimated to be one of the top CO2-to-biomass converters.

He stated “[hemp] is even more effective than trees,” and that “industrial hemp absorbs between eight to 15 tonnes of CO2 per hectare of cultivation.”

Elsewhere in Cambridge, Jonathan Tuckey Design recently announced its plans to add a hempcrete extension to a house in a conservation area.

Photography is by Elodie Dupuy.