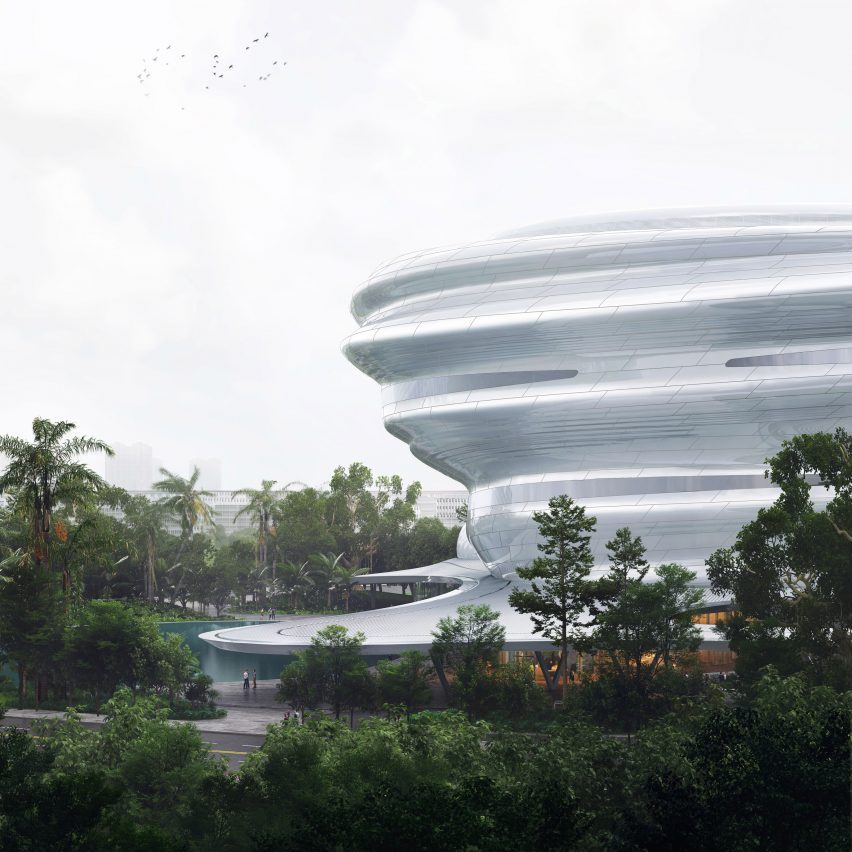 Chinese architecture studio MAD has released visuals of the top-heavy Hainan Science and Technology Museum that it has designed for the coast of Haikou in China.

Slated to open to the public in 2024, the cloud-like museum will encompass 46,528 square metres on a verdant site in the city near a national wetland park.

The Hainan Science and Technology Museum is being designed by MAD to serve as a major tourist attraction for Haikou, in which visitors can explore science, technology and nature.

It is also the second project designed by the studio in the city to resemble a white cloud, with the other being the recently completed Cloudscape of Haikou, which opened in April 2021.

“MAD’s design for the museum draws from the site’s dual urban and natural context,” said the studio, which is led by Chinese architect Ma Yansong.

“Set against the backdrop of a rich tropical rainforest, the museum’s main pavilion is shaped like a cloud in dialogue with nature,” it continued.

“From a distance, the futuristic building appears to emerge from the city, while visitors entering in the museum area witness it floating above the jungle.”

The building’s futuristic cloud-like aesthetic will be achieved by MAD by using silvery fibre-reinforced plastic across its exterior.

It will have a top-heavy form, planned around a large central atrium with a domed skylight and bounded by three floor-to-ceiling elevator cores.

Over half of the building’s footprint will be dedicated to facilities above ground. The remaining 18,746 square metres of the building will be contained in the basement.

Its main facilities will include permanent exhibition spaces as well as a planetarium, a theatre with a giant screen and a flying theatre – a type of simulator ride.

A ramp that doubles as an exhibition space will play a key role in the building, ascending five floors around the atrium to connect all of the museum’s facilities.

MAD has planned for the exhibition experience to begin on the fifth floor, where the elevators will bring visitors to a 360-degree viewing platform overlooking the sea and cityscape.

Visitors will then be invited to descend down the spiralling ramp into the other galleries, which will explore topics ranging from technology and space to life sciences and maths.

The second floor will contain an “interactive experience area” and a children’s playground.

Outside, the building will be complete with a canopy that will unwind and project out from the main pavilion in all directions to offer shelter from the city’s humid and rainy climate.

There will also be various outdoor public spaces, including a sunken plaza and reflective pool, intended as areas for relaxation.

MAD was founded by Yansong in Beijing in 2004 by Yansong. It now has offices in Los Angeles, New York and Rome. Elsewhere in China, it is currently developing a multi-purpose cultural centre that was also designed to resemble a floating cloud.

Clouds have proven to be a popular reference for many recent architecture projects in China. SANAA also recently designed a museum in Shenzhen modelled on “clouds emerging from the sea”, while Gad Line+ Studio designed a pavilion in Shangdong to mimic “a floating cloud hovering in the mountains”.