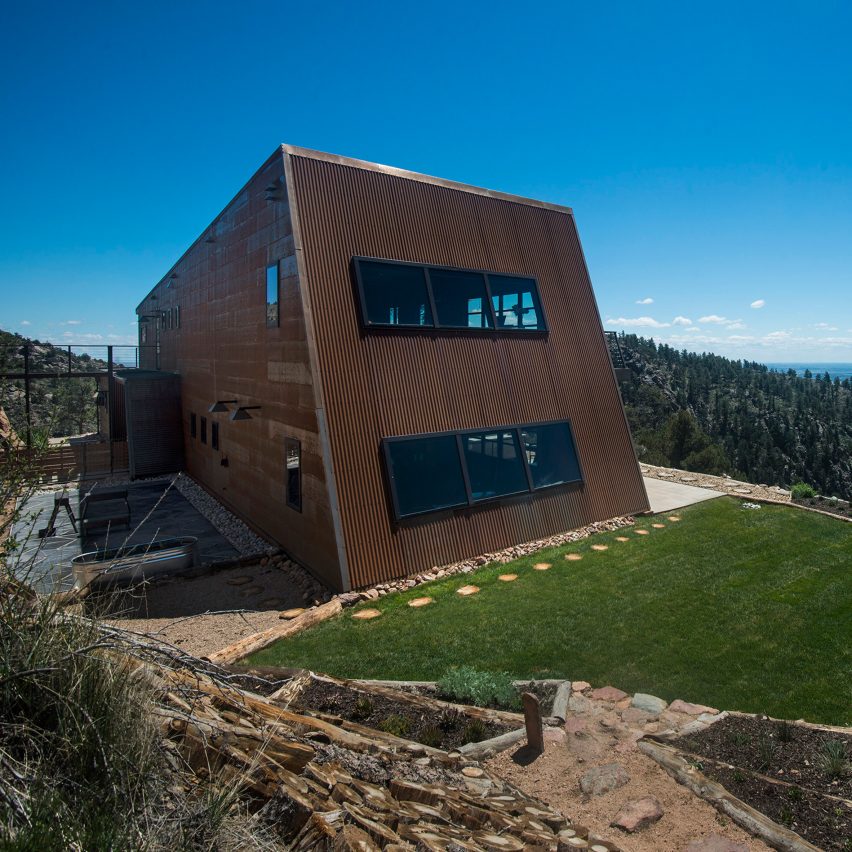 Self-taught designer Marc Gerritsen has completed a sculptural, metal-clad house for himself in northern Colorado that is designed to endure storms and wildfires.

The MAAD Peak house is located on a 40-acre (16-hectare) property overlooking the foothills of the Rocky Mountains and the city of Fort Collins. The forested area features hiking trails and an abundance of wildlife such as bears, eagles and elk.

The project was designed by self-taught designer Marc Gerritsen of MAAD Design to serve as a full-time residence for himself and his designer wife, Adria. MAAD is a combination of the first two letters of their names.

The project took five years, and Gerritsen described the 3,300-square-feet (307-square-metre) home as his “magnum opus”.

He and his wife were drawn to Colorado for its wide, open land and panoramic views, along with the ability to enjoy privacy and silence.

They desired a home with space, simplicity and solitude.

They set out to build a resilient house that could “hold its own” during events such as snowstorms, high winds and wildfire.

“Safeguarding the buildings from all threats and unpredictable conditions would have been a fool’s errand,” the studio said.

“Instead, we opted for a robust structure that adapts to its surroundings and will continue to function in all types of disruptions.”

Described as modern and monolithic, the two-storey, wood-framed house is rectangular in plan and has an angled form that enables “150-mile-an-hour winds to glide over it”, said Gerritsen.

The roof is sloped in a way that allows for the shedding of snow and rain, helping minimize moisture damage.

The exterior is clad in low-maintenance, weathering steel that is expected to last over 75 years.

The ground level holds the public spaces, along with a two-car garage and an office that doubles as a spare bedroom.

“All are connected by one linear corridor, the main artery of the house, which is both an efficient use of space and an intuitive way to move from one area to the next,” said the designer. “It also doubles as a traditional foyer.”

The kitchen is fitted with ample storage and a 16-foot (4.8-metre) island made of steel and walnut.

The dining and living rooms feature concrete flooring and contemporary decor in earthy materials. Just beyond is a spacious patio, garden and lawn.

In addition to a bed, the main suite features a workspace, a large daybed and a wood-burning fireplace. A balcony made of wood and steel provides sweeping views of the mountains.

The other bedroom – designed to be “open, bright and cheerful” – also has a balcony, this one looking toward Bonner Peak and the Eastern Plains.

The upper storey offers access to a bridge that crosses over a walkway and leads to a lookout terrace, which can be used for lounging and entertainment.

Throughout the home, large windows and glazed doors provide views and usher in sunlight, helping warm the house in the winter.

Additional heat is provided by a radiant floor heating system and wood-fired stoves. Fallen trees around the property are used as fuel. 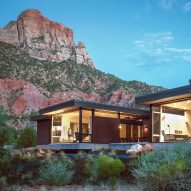 The home – which is tied into the electric grid – has no air-conditioning system. “We opted for oversized windows and doors for ventilation and to let in fresh air,” the studio said.

Low-maintenance and eco-friendly finishes include cork flooring, birch plywood wall panels and reclaimed wood. Small details – such as using screws and bolts instead of sealants and adhesives – add to the home’s sustainable attributes.

The project also entailed the construction of a wood-fired sauna, a plunge pool and a detached workshop and studio space.

Gerritsen trained at the Design Academy Eindhoven several decades ago. Prior to relocating to Colorado, he lived in Asia for more than 20 years.

His prior work includes the Naked House, which is set within a nature reserve on a Thai island.

Other homes in Colorado include a one-bedroom house by Renée del Gaudio Architecture that has fireproofing elements such as steel siding and non-combustible roof boards and a home by CCY Architects that was built largely below grade to reduce its visual impact on the natural landscape.

The photography is by MAAD Design.