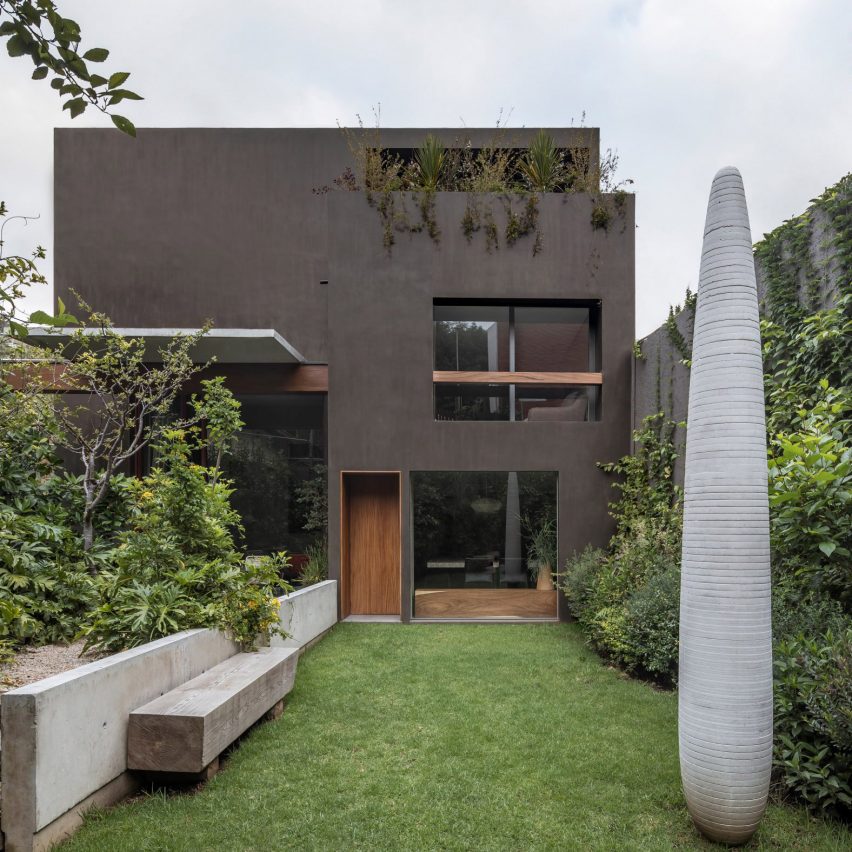 Architecture studio Taller Héctor Barroso has fully revamped the decades-old DDH House in Mexico City for a family of five, including new facades clad in dark brown stucco that looks black.
The DDH House sits on an irregularly shaped lot in the Lomas de Chapultepec neighbourhood in Mexico City.

Local firm Taller Héctor Barroso was tasked with updating and expanding a 1980s home by an unknown architect that had been refurbished several times over the years.

The design needed to adapt to the lifestyle of the new occupants, a family of five.

The team decided to strip the three-storey building down to its structural elements and completely revamp the facades and interior layout.

For the exterior walls, the team used concrete blocks, which were then covered with dark brown stucco that, when dry, appears black.

On the street-facing facade, windows were kept small enough to retain privacy while still allowing light to enter and for the inhabitants to view the surroundings.

“The house gradually surrenders to its surroundings through a series of openings that allow the natural light in,” the architect said.

Adjacent to the house is a painted steel fence with vegetation growing on top that covers an attached garage.

Within the home, the corridors and the rooms of the interior gradually open up to the exterior landscape by means of the rear of the house which is open to the garden.

“As it extends into its garden, the exterior completely envelops the programme and the large windows blur the boundaries between spaces.”

The ground level encompasses a living room, dining area and kitchen, along with the garage. 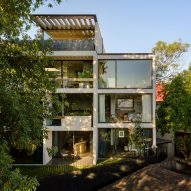 In the living area, the team created a tall bookcase with a metal ladder that provides access to a metal platform to access the upper reaches.

Large, pivoting doors lead to a sheltered patio. Beyond is the backyard, which features lush vegetation, a bench and a concrete sculpture by Tezontle Studio.

On the middle floor, the team placed two bedrooms and a family room, while the top level holds the main bedroom suite and a terrace adorned with vegetation.

Taller Héctor Barroso designed the home’s built-in furniture and selected some of the decor, as well. Interior finishes – including stucco, oak and ipe wood – are meant to “accentuate the contrasts of light and shadow as the day wears on”.

Established in 2011, Taller Hector Barroso has completed a number of residential projects in Mexico, many of which make use of natural materials.

Others include a holiday dwelling made of earthen blocks, pine and concrete as well as a cluster of houses in a Mexican forest that have walls made of local soil.

The photography is by César Béjar.