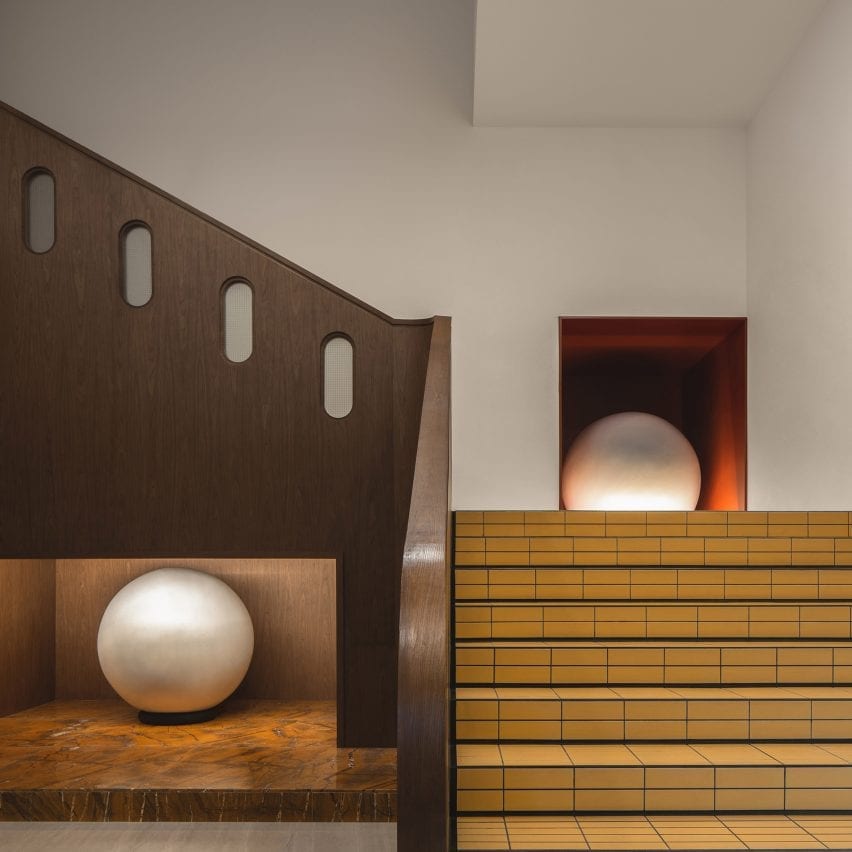 Grid patterns and crisp lines are softened by an earthy colour palette in this hotel interior in Chengdu, China, by local firm Archetype Design Organization.

Located in a building from 2002 that was previously used as shops and offices, the 3,209-square-metre Buda Hotel is sandwiched between the city’s busy Yizhou Avenue and a quiet community neighbourhood.

“For the stay-in hotel, we hope to achieve a process of integration; an experience of memory, and a state of forgetting oneself,” the architects told Dezeen.

“[A] warm, delicate, comfortable and relaxing place – we hope it is a selfless experience.”

The exterior of the hotel is clad in a charcoal-coloured calcium silicate board. An entranceway clad in walnut panelling and rectangular mustard yellow tiles guides travellers inside.

The mustard tiles continue inside the hotel’s lobby where they stretch across an arched ceiling that the architects said was installed to evoke a homely atmosphere.

“The first purpose is to give depth and bearing for light into the space, and the second purpose is to wrap around the shapes, so as to perceive comfort in mind,” the studio said.

“The jump in colours is to define the relaxation and cuteness of the hotel, and we chose yellow to keep the visual temperature of the hotel. The choice of mustard yellow tiles is to increase the meticulous experience while ensuring the durability of the hotel. It also forms a strong contrast between the hotel and the surroundings.”

In the lobby, the tiles are combined with crisp white walls and dark walnut wood. A staircase with spotlit spherical sculptures installed in alcoves leads to the hotel’s 57 guest rooms.

In contrast to the dark corridors and lobby spaces, the hotel’s rooms are naturally lit. The dark walnut panelling is continued inside the rooms and used on furniture and window shutters, while off-white rectangular tiles, white bed linen and brown leather create a lighter mood.

Archetype Design Organization was founded in Chengdu in 2014 by Jinnan Liao.

A curved tiled wall is also used to guide customers inside this minimal patisserie in Hangzhou, while pink tiles were added to the facade of a London flat extension to create an unusual exterior.

Photography is by Chuan HE / Here Space Photography.

The post Mustard yellow tiles clad the walls of this Chengdu hotel by Archetype appeared first on Dezeen.