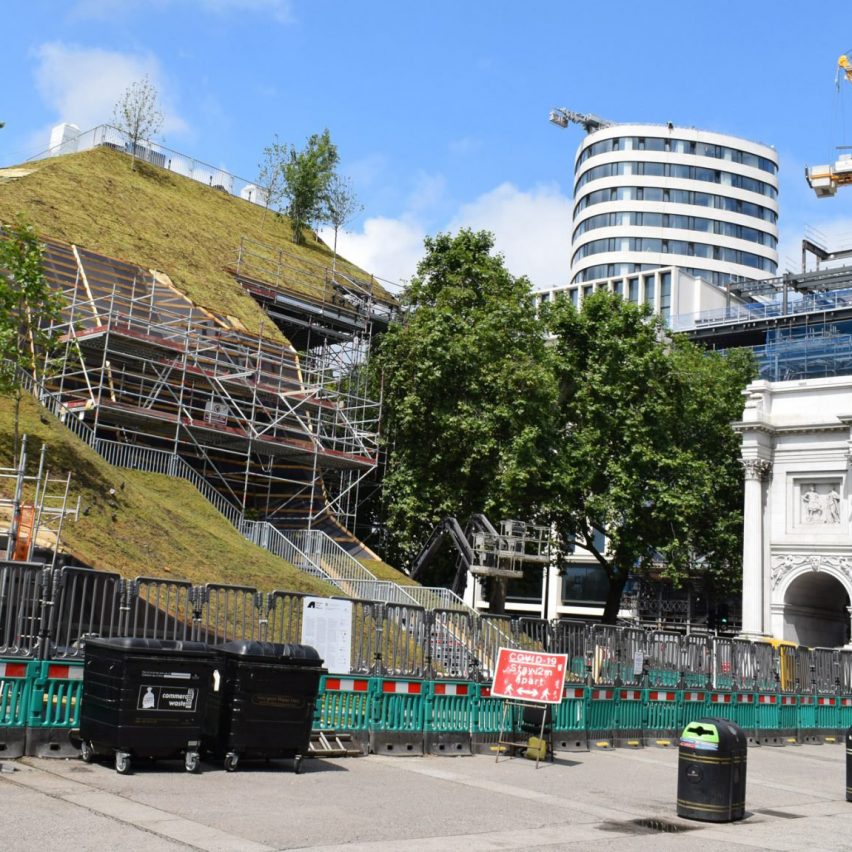 Dutch studio MVRDV‘s £2 million fake hill in central London has been ridiculed by critics and forced to temporarily close, with refunds issued to disgruntled visitors.

The 25-metre-high Marble Arch Mound officially opened to the public on Monday on a traffic island between Hyde Park and shopping destination Oxford Street.

Attraction “not yet ready for visitors”

However, the temporary landscaped mound, which is topped by a viewing platform, has been forced to stop taking bookings until the trees and turf have had “time to bed in and grow”.

“We are aware that elements of the Marble Arch Mound are not yet ready for visitors,” said the council.

“In light of the delay, we are offering anybody who has booked a visit during the first week a return ticket free of charge so that they can enjoy the full experience […] and the landscape once it has had time to bed in and grow.”

People who have bought tickets, which start at £4.50 each, are still allowed to visit but will also be offered a refund or a ticket for a second visit later in the year.

The viewpoint alongside Marble Arch – a triumphal arch designed by architect John Nash and built in 1872 – was commissioned by Westminster Council to draw people back to the nearby Oxford Street shopping district following the coronavirus pandemic.

However, the attraction has drawn criticism from critics and social-media users due to its unfinished appearance, disappointing views and lack of planting.

Architecture critics have panned the installation. “The Marble Arch Mound shows signs of struggle,” wrote Observer critic Rowan Moore, who visited ahead of the opening.

“Last week, abseiling operatives were still frantically sticking slabs of turf to its sloping sides. The result looked parched and patchy, more like an ensemble of ill-matched carpet tiles than a greensward.

“The recent heatwave hasn’t helped, but none of the greenery looks happy.”

Social media users ridiculed the project. “MVRDV ‘aving a laugh,” tweeted Twentieth Century Society president and former Architectural Review editor Catherine Slessor, who posted a photo of a row of bins and barriers in front of the mound.

“Maybe MVRDV didn’t want anyone thinking they were over the hill,” said architect William Tozer.

“Marble Arch Mound going down like a turd falling from a dog’s arse, I see,” wrote University of Westminster architecture professor Sean Griffiths.

“The only way is down”

“Perhaps MVRDV has taken us to the zenith of these ridiculous greenwashing installations, so the only way is down from here,” Feihn tweeted. “That would make the mound actually worth surmounting.”

Westminster Council intends to reopen booking in the near future once the planting has been improved.

“The Mound is a living building by design,” it stated. “We’ll continue to adapt and improve London’s newest outdoor attraction and resolve any teething problems as they emerge.”

The post MVDRV's Marble Arch Mound "going down like a turd" as council suspends bookings appeared first on Dezeen.