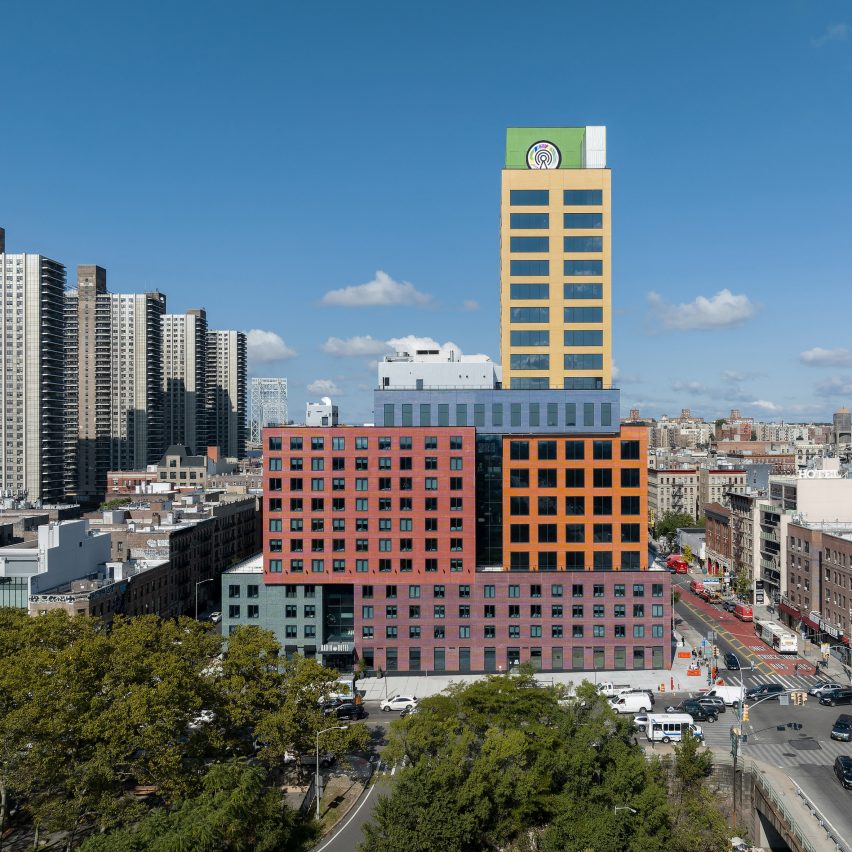 It was designed collaboratively by Dutch firm MVRDV and local firm Stonehill Taylor, which acted as the architect of record. The 23-storey tower was completed this year and opened in September, four years after the project kicked off in 2018.

Sited in the Upper Manhattan’s Washington Heights neighbourhood, the building’s primary occupant is a hotel with 221 rooms. The tower also contains a restaurant, shopping spaces and for-rent office space.

The building’s various volumes were sized to each have the same scale as the surrounding neighbourhood buildings.

Each was also clad in a different brick colour, ranging from yellow, blue, orange and green. According to the architecture studios, this prevents the tall building from “overwhelming” the adjacent streets.

“The property is designed to stand out and serve as a welcoming beacon for out-of-towners coming into Manhattan,” said Stonehill Taylor.

According to MVRDV, the multi-coloured bricks in green, yellow, blue, orange and magenta also represent the “diverse and vibrant” character of the neighbourhood.

“The design of Radio Hotel and Tower is inspired by that character – we took the smaller blocks that are typical in the neighbourhood and stacked them into a vertical village,” said MVRDV founding partner Winy Maas.

According to the team, the Radio Hotel is the first full-service hotel to be built in Washington Heights.

“Even though the neighborhood is the fifth largest in New York City, Radio Hotel is the first-ever full-service hotel to open in the area,” said Stonehill Taylor.

Visitors to the building have access to a ground-floor courtyard that includes a small park, benches and cafe tables.

A new Dominican restaurant, Jalao, occupies part of the ground floor and is open both to hotel guests and the public.

On the rooftop, a bar and observation deck offer views of the surrounding neighbourhood and the nearby George Washington Bridge.

“The rooftop offers sweeping, 360-degree views of lower Manhattan and Queens while providing a landmark gateway at the George Washington Bridge connection to the Bronx,” said the team. 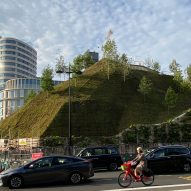 The hotel’s guest rooms feature pared-back interiors in the sleeping areas. The bathrooms, however, have bright walls and tiles that nod to the building’s colourful facade.

Similar colourful accents are found throughout the communal spaces, including the lobby, corridors and restrooms.

Other upcoming projects by the firm include a contribution to the Mission Rock neighbourhood development in San Francisco and an office building in Detroit dubbed “Glass Mural” with a facade painted with vivid, cartoonish graphics.

The Dutch firm was founded in 1993 by Winy Maas, Nathalie de Vries, and Jacob van Rijs.

The photography is by Ossip van Duivenbode.