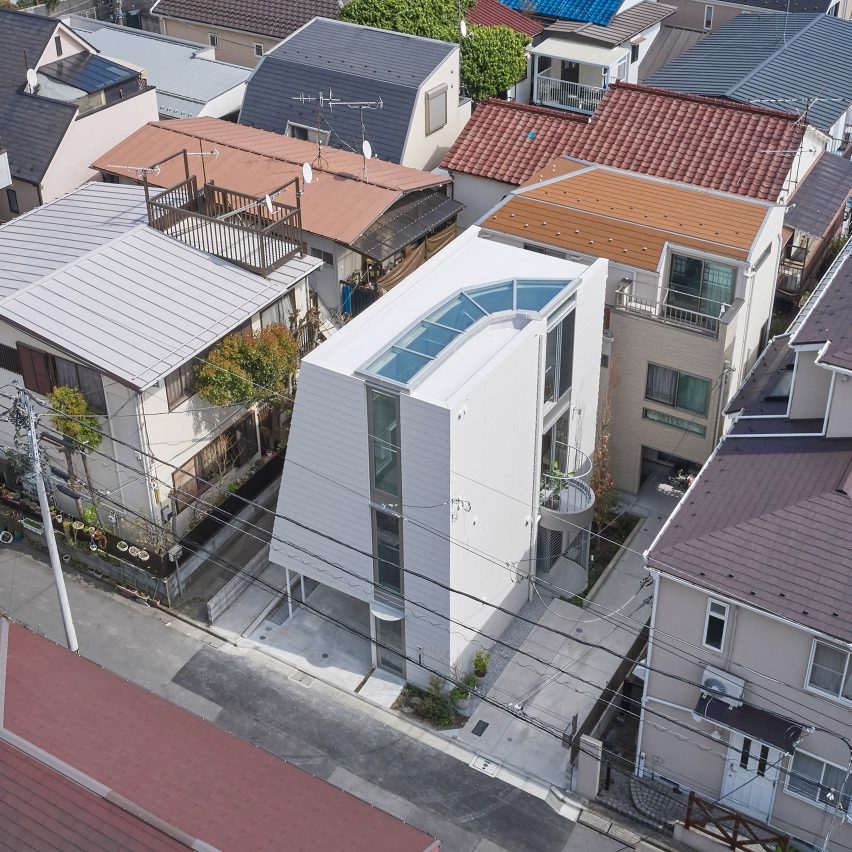 A skylit and silver-painted void runs through the centre of the Scenery Scooping House, which Japanese practice Not Architects Studio has created in a dense residential area in Tokyo, Japan.

Hemmed in by three houses on a small plot in Ōta, the dwelling is planned around a triple-height void to maximise views and light while minimising overlooking.

According to Not Architects Studio‘s co-founder Lisa Ono, this is to help Scenery Scooping House connect with nature in the city, or what she describes as “small scenery”.

“This is a proposal for a house that can scoop up the small scenery scattered in such a city and spend time with [it],” she explained.

“When I usually walk around my neighborhood, I see a similar cityscape,” Ono added.

“However, when I squint, there are moments that touch my heart, such as the trees planted in the garden, the weeds growing on the roadside, sunlight filtering through trees along a street, and the sky seen from between the buildings.”

Across three floors, Scenery Scooping House contains a large kitchen, living and dining space with storage and parking below and a bedroom and study above.

The skylit void cuts through the northwestern corner of the home and runs above an internal path that curves to connect the road with an adjacent alleyway.

At the end of the path, a small mesh-wrapped patio and balcony have been placed to overlook the alley.

While pulling light deep into the home via glazed openings at either end, the void also acts as the primary circulation area.

Sculptural steel staircases are overlooked by the openings to the surrounding rooms, which are positioned to ensure views outside.

“The small and large volumes of the rooms on both sides of the valley have openings of various shapes and heights, which can see the scenery directly outside or the surface of the valley that scoops up the scenery,” Ono said. 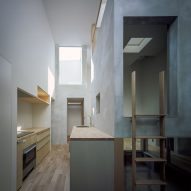 “We wanted to incorporate elements of the external environment into the house so chose a mirror-like silver colour to reflect them,” said Ono. “It creates a new landscape that can only be seen in this house.”

Externally, Scenery Scooping House has been clad in galvalume sheets with silver window and door frames, chosen to blend in with the “miscellany” of the surrounding streets and buildings.

Other Japanese dwellings featured on the House in Yanakacho by KACH that features polycarbonate cladding and a residence by Tomoaki Uno Architects with an Aztec-informed pyramid.

Previous projects by Not Architects Studio include a home in Tokyo’s Shinagawa district that has external terraces wrapped in metal mesh.

The photography is by Yasuhiro Takagi.

The post Not Architects Studio creates Japanese house with void to "scoop up" views appeared first on Dezeen.