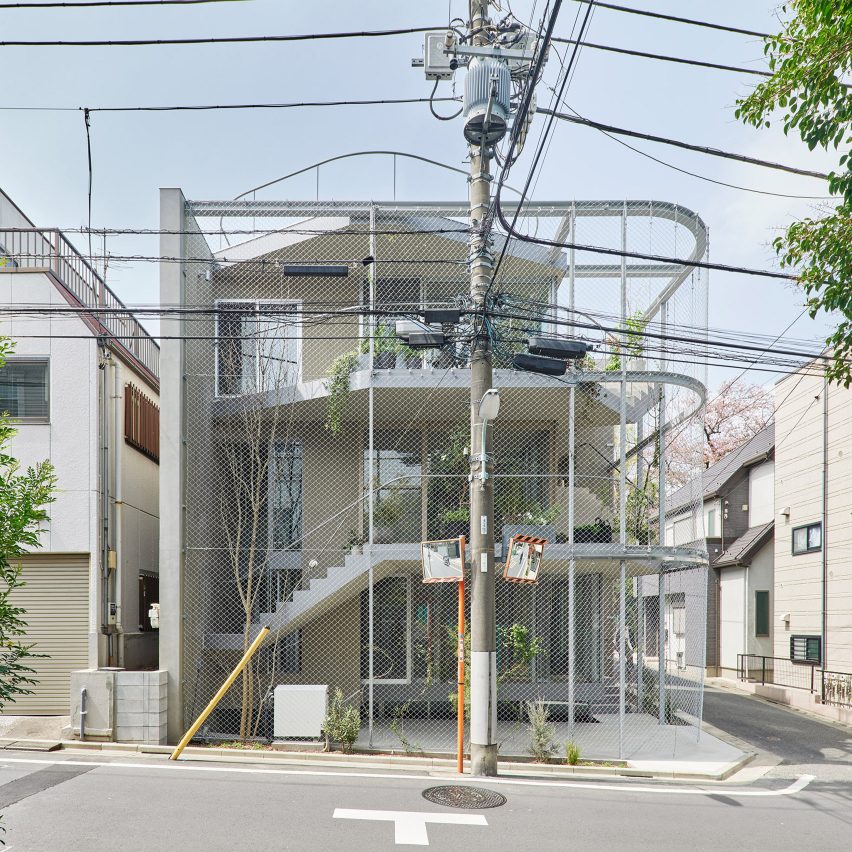 Screens made from metal mesh wrap around two sides of this house in Tokyo, Japan.

Weather House was designed by Not Architects Studio for a corner site in Tokyo’s Shinagawa district.

The plot is situated between a large park in front and a smaller park to the side, which are connected by a walkway that passes close by the property.

To create a sense of connection between the neighbouring green spaces, Not Architects Studio replaced external walls with open mesh and extended the pavement into the building.

The three-storey building’s floors are connected by external stairs with different widths and gradients.

The stairs wrap around the house’s two exposed edges, linking a series of outdoor living spaces distributed across the various levels.

“The path connecting each space becomes a big path or a small path depending on the weather and the season,” Ono added.

The terraces and balconies are enclosed by chain-link wire mesh, which was chosen to reduce the physical disconnection between the house and its surroundings.

Climbing plants will eventually cover the metal mesh surfaces, forming a layer of vegetation that will echo the greenery of the nearby parks.

The two walls positioned away from the streets are made from reinforced concrete to create a protective barrier for more intimate spaces.

An internal staircase located next to the rear wall connects rooms including a bedroom on the ground floor and the kitchen and dining area on the first floor.

The main living areas are predominantly open plan and are lined with sliding glass doors that open onto the various terraces.

A bathroom slotted in alongside one of the concrete walls on the second floor adjoins a sheltered terrace overlooking the street.

The uppermost section of the external stair ascends to a turfed rooftop garden with views across the surrounding neighbourhood.

Japan is home to some of the most unusual houses featured on Dezeen. Elsewhere in Tokyo, Unemori Architects recently completed a small house composed of a stack of steel boxes and Nendo punctured a multigenerational house with a giant staircase.

Privacy is also a big concern in many Tokyo residences, leading to bunker-like structures such as architect Tanijiri Makoto’s concrete family home that features a sheltered terrace.

The photography is by Yasuhiro Takagi.