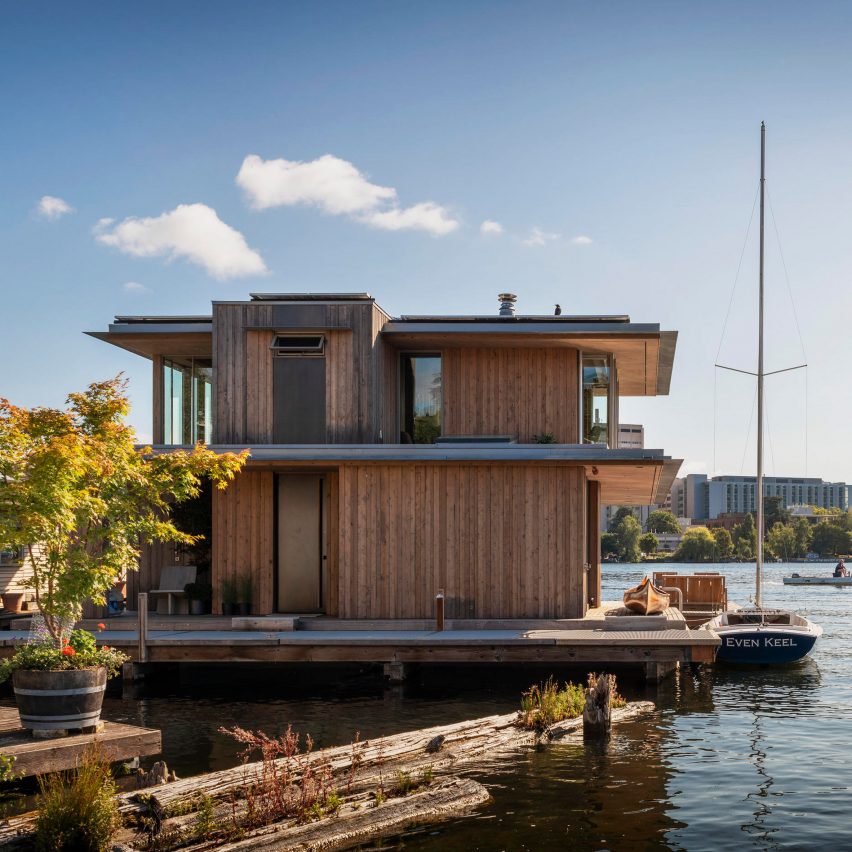 Knotty cedar and galvanised steel were used to form a two-storey, floating home by US firm Olson Kundig that draws upon cabin architecture.

The Water Cabin is located in Seattle’s Portage Bay, just south of the University of Washington. It serves as a full-time residence for a client who previously rented a floating house in the area and decided to build his own home there when a lot became available.

Designed by local firm Olson Kundig, the building is intended to offer “a cabin sensibility in an urban environment”.

The floating home is also designed to provide a strong connection to the bay, which is part of a canal connecting the Puget Sound to Lake Washington.

“Small in stature, the home creates a platform from which to enjoy and engage with the surrounding waterway,” the team said.

The building consists of two levels, with the upper one stepping back to create a “sense of refuge”. The recess also allowed for a 100-square-foot (9.3-square-metre) terrace.

“The horizontal lines of the building echo the flat plane of the lake in an effort to make it one with the site,” said Olson.

Given the home’s location, the team chose exterior materials that are low-maintenance and can hold up in a marine environment.

The structural system is made of galvanized steel, and facades are clad in knotty western red cedar that was lightly stained.

“The siding’s thin, vertical wood slats are arranged in an irregular articulated pattern, recalling the random composition of trees in a forest,” the team said.

Inside, the 1,580-square-foot (147-square-metre) home offers all the key living elements. “There are strict restrictions on the size and dimensions of floating homes,” said Olson. “Our client wanted to make the best use of every inch.”

The lower level encompasses an open space for lounging, dining, cooking and working. There also is a hidden Murphy bed for guests. 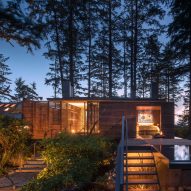 A glazed corner and large, sliding doors enable the interior to flow onto a patio with ipe wood decking. A window-lined staircase – which serves as a light well – leads to the top floor, where the team placed a bedroom suite.

Like the lower level, floor-to-ceiling glass provides sweeping views of the watery terrain and diminishes the boundary between inside and out.

Materials within the home include knotty cedar, oak and birch. Warm wooden tones are contrasted with metal finishes in silver and black tones.

Overall, the home is intended to feel cosy and intimately tied to its surroundings, similar to a cabin in the forest.

“This informal, low-contrast interior supports a sense of the home as an oasis, despite its location in a bustling community,” the team said.

Other floating homes in Seattle’s Portage Bay include a compact dwelling by Studio DIAA that features a dark exterior and a light-toned interior.

The photography is by Aaron Leitz.