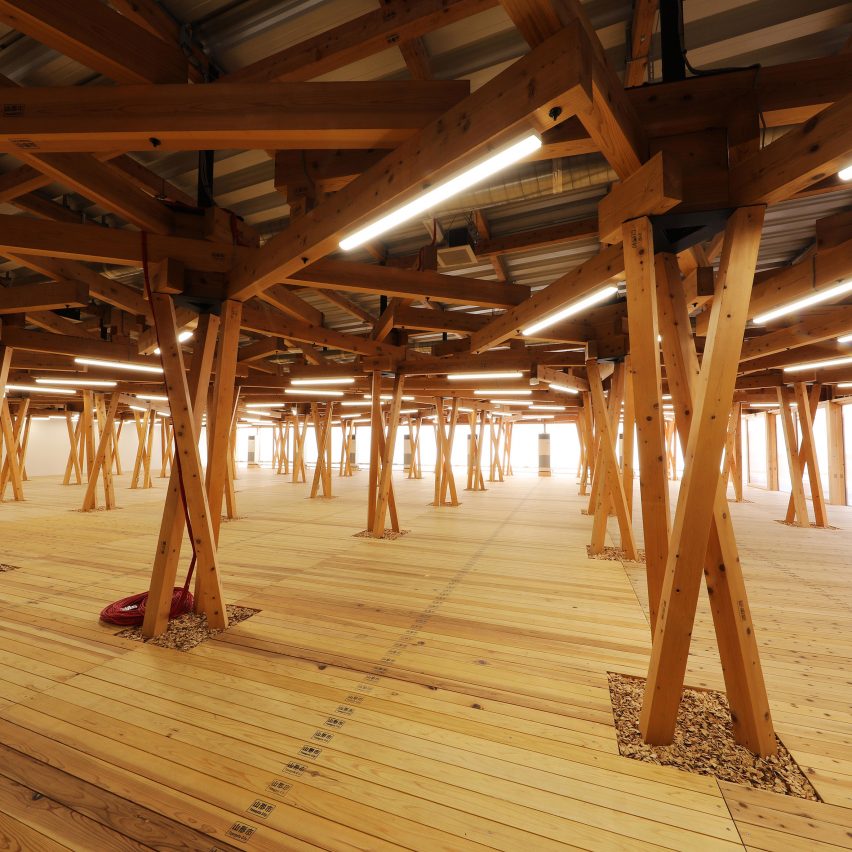 The temporary structure, which will serve as the central meeting place for athletes within the Olympic Village, contains a cafe, bank, medical spaces, lounges, hair salons, retail spaces and a media centre.

The 5,300 square-metre communal space is located at the Harumi waterfront district of Tokyo on the eastern side of the athletes’ village.

It was constructed from 40,000 pieces of sustainably Japanese cypress, cedar and larch, which were “borrowed” from local governments across the country.

“Use of wood from different regions throughout the building will express diversity and harmony,” said the Olympics in a press release.

“In addition to revitalising the timber industry and contributing to the conservation of sustainable forests, use of Japanese lumber reflects the goal of reducing environmental impacts and realising sustainability by leaving a legacy that attests to the participation of all regions of the country in the Games.”

Nikken Sekkei arranged the donated timbers to create a structure that draws on the design aesthetics of traditional Japanese buildings.

It is a low-lying, single-storey structure that is clad in long vertically and horizontally arranged beams and was topped with a corrugated metal roof.

Inside, wood was arranged in a lattice formation with the structure of the building celebrated and left exposed.

Each piece of wood used in the building was marked with a stamp that detailed the name of the area it was sourced from.

After the completion of the games, the structure will be dismantled and wood returned to the donating municipalities to be reused in local construction projects.

“Under the project, lumber borrowed free of charge from local governments across Japan will be used to construct the Village Plaza,” said the organisers.

“Then after the Games, lumber from the dismantled Village Plaza will be used as a legacy in local governments’ public facilities and elsewhere.”

The studio also designed the Ariake Gymnastics Centre for the games, one of only a few venues built specifically for the event.

The building is part of the Olympic organisers plan to promote sustainable initiatives at the game.

“[This] project is based on these principles, and is the first initiative of the kind in the history of Olympic and Paralympic Games.”

Other initiatives aiming to make the games sustainable include the athletes’ beds being created from cardboard frames, podiums made from donated plastic waste and medals made from recycled smartphones.

Images are courtesy of Tokyo 2020.