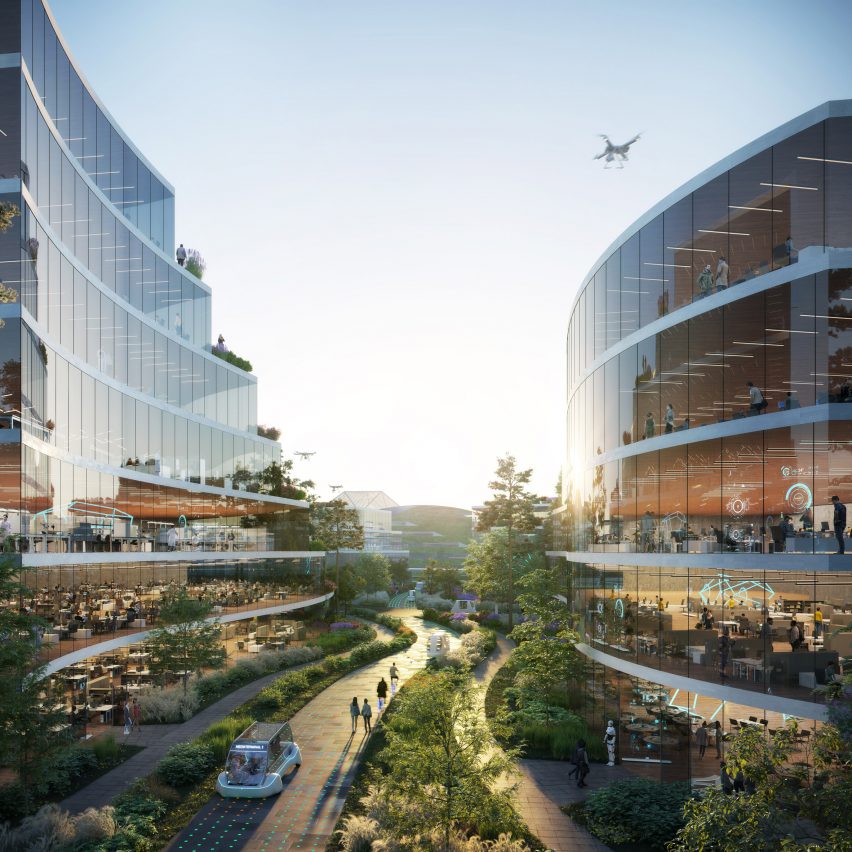 Chengdu Future City is a car-free masterplan for the capital of China’s Sichuan province designed by architecture studios OMA and GMP to focus on the site’s existing geography and topography.

The 4.6-square-kilometre scheme, which is being developed within the rolling hills of east Chengdu, will contain six clusters that are modelled on traditional village settlements in the city.

Each of these zones will be designed by OMA and GMP to blend in with its surrounding landscape and incorporate spaces dedicated to education and innovation.

According to OMA, the goal of the masterplan is to challenge conventional urban planning models, which are typically driven by road networks or maximising gross floor area.

Instead, the scheme is dictated by geography and topography of the site, with a focus on establishing connections to the existing landscape so that the architecture forms a part it.

“With this project, we hope to provide an alternative to the typical masterplan, which is based on the traditional car-oriented road network,” said Chris van Duijn, project lead and partner at OMA.

“We intend to create a design rooted in the geography of the site. We hope that the connection between architecture and landscape will result in a dynamic environment for education that will inspire innovative ideas.”

OMA and GMP’s proposal was the winning entry to a competition to design Chengdu Future City. The first cluster that the duo will now develop is the International Educational Park, a zone to the west side of the site for universities.

In the southeast of the site, GMP will also plan a transit-oriented development – an urban planning model that prioritises maximising the number of people and buildings in walking distance to transport services.

Once complete, the International Educational Park is expected to measure 460,000 square metres and will host spaces for multiple universities, including student accommodation, laboratories and offices.

According to OMA, the buildings will be designed to follow the site’s topography and incorporate landscaped terraces that act as “an extension of the natural landform of the site”.

At the centre of the International Educational Park will be a valley in which OMA and GMP will build a landmark “complex building” measuring 80,000-square-metres.

This will become the heart of the campus and contain a library and student centre, alongside auditoriums and a mix of workspaces.

The transport-oriented development that GMP is overseeing will centre around an elevated, circular building, to which a network of trains and other public transport facilities will connect.

The other clusters that will form part of Chengdu Future City will be dedicated to housing, research facilities with rooftop farms and areas for commercial and public venues.

There will also be a “government cluster”, positioned on top of a hill with a series of office blocks that will be connected by walkways extending into the landscape.

Each cluster will be car-free, with all buildings and facilities within them accessible by foot within ten minutes. They will also be connected to a nearby train station and the surrounding city through a “smart mobility network” that utilises automated vehicles.

OMA, otherwise known as the Office for Metropolitan Architecture, was founded in Rotterdam in 1975 by Rem Koolhaas, Elia Zenghelis, Madelon Vriesendorp and Zoe Zenghelis. Today it also has offices in Hong Kong, Beijing, New York, Dubai, Doha and Sydney.

Other masterplans currently under development by the studio include the Morden Wharf neighbourhood for London’s riverside, alongside the transformation of two Milanese railway yards into “ecological filters”, which it is carrying out with Laboratorio Permanente.

Elsewhere in China, OMA recently completed an office skyscraper in Shenzhen with three cut-outs for terraces, and a giant glass office in Beijing that is punctured by geometric insets for Tencent.

The post OMA and GMP design Chengdu Future City as "alternative to the typical masterplan" appeared first on Dezeen.