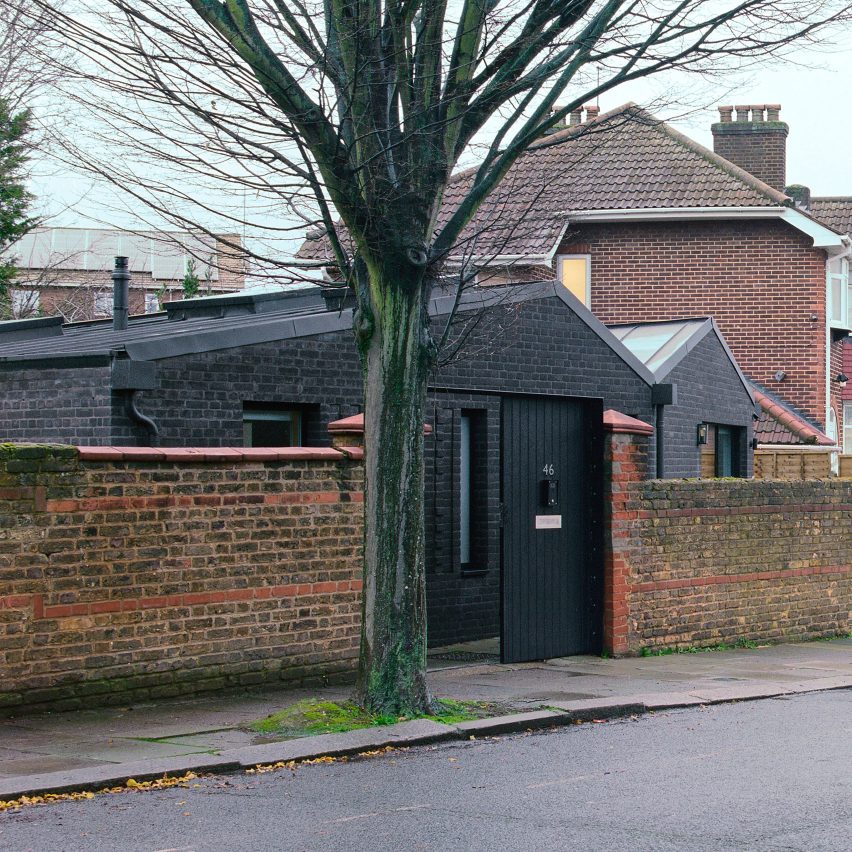 Local firm Phillips Tracey Architects has created a compact black-brick house in west London, featuring a double-gabled roof that references a pair of garages across the street.

Phillips Tracey Architects designed Jupp House to occupy a plot at the end of a garden in Richmond that is owned by the client’s parents.

The single-storey Jupp House replaces an old garage and shed that were tucked away behind a brick wall at a bend in the street.

A new pedestrian entrance is slotted into a gap between brick piers that previously formed the entrance to the demolished garage. The black gate mirrors the appearance of two garage doors on the opposite side of the street.

The house fills most of the available site area and has a gross internal floor space of 66 square metres. Its cranked plan is comprised of two connected wings that follow the building lines of the properties on either side.

Spaces between the angled elevations and the boundary walls were used to create two private courtyards to the front and rear of the house.

Jupp House’s form evokes the garages opposite, with its irregular roofline following the shapes and angles of their facades.

“The roof form has been designed with an intricate pitched form with gables fronting the street – protruding over the top of the boundary wall to give the building an intriguing character and reflecting older gabled buildings across the street,” the architects said.

Externally, Phillips Tracey used simple materials including dark brick and grey zinc that it said were chosen “to reflect the discreet setting and to ensure they weather and mature well.”

The house’s entrance hall is located at the point where the two angled wings meet. One wing houses two bedrooms and a bathroom, with the living area on the other side.

The hallway flows into the dual-aspect living and dining space to the east, which receives plenty of daylight from glazed doors on either side and openings in the exposed timber roof.

“Internally, the roof structure is expressed with bespoke rooflights providing high levels of daylight within,” the studio added. “The ceiling heights generously follow the line of the faceted and gabled roof, creating unexpected and dramatic spaces.”

The two bedrooms on the other side of the hallway are separated by storage and the main bedroom’s en-suite bathroom. The main bedroom also has full-height glazed doors that open onto the northern courtyard.

Phillips Tracey Architects is based in Richmond, where it works on projects of varying scales and programmes. The studio previously designed a two-storey brick house slotted between a pair of heritage-listed buildings in south London.

Photography is by Henry Woide.