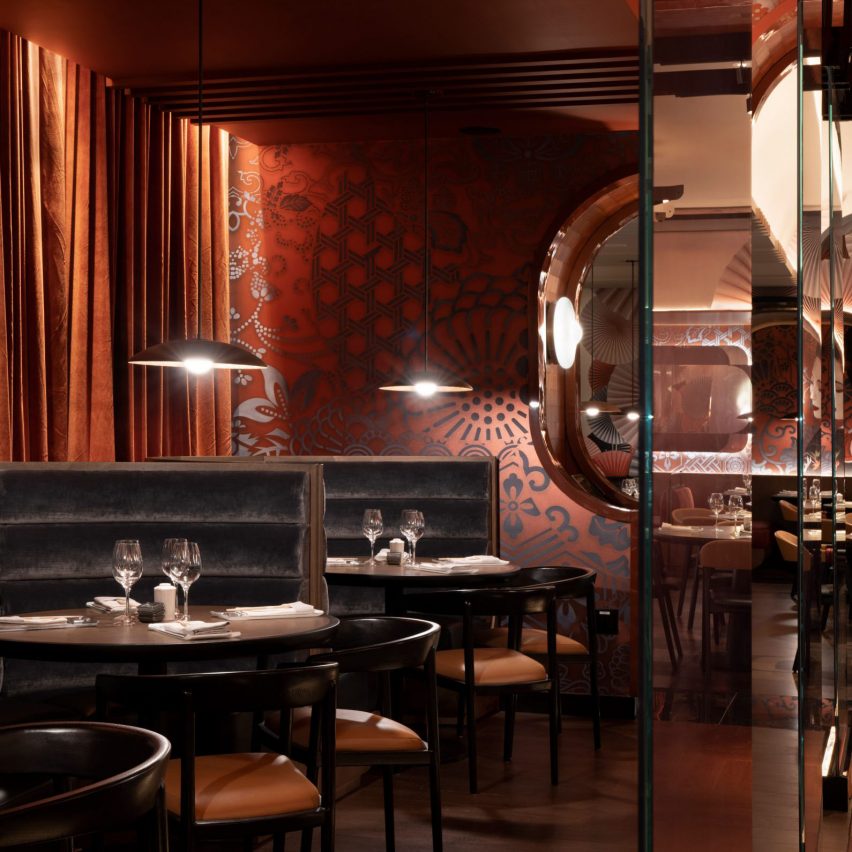 Elements of traditional Japanese architecture and design are combined and given a contemporary spin by New York studio Rockwell Group at this sushi restaurant in Manhattan.

Katsuya is the latest restaurant of its name by chef Katsuya Uechi, following locations in Los Angeles, Miami and the Bahamas all serving sushi with a Californian twist.

For its interior, Rockwell Group looked to a variety of Japanese aesthetic traditions, and blended them together to create a theatrical experience.

“The interior dining rooms take a maximalist approach to Japanese aesthetics, an entertaining departure from the contemporary minimalist vogue,” said the team.

The restaurant totals 6,890 square feet (640 square metres) and seats up to 305 diners. Guests enter past the sushi bar and lounge, which is set up for casual diners to enjoy light bites in view of the kitchen.

In the main dining area, the space is divided into three sections by a pair arched openings and a series of translucent glass screens subtly printed with images of wagasa – Japanese umbrellas.

The archways, shaped to reference torii and pagoda architecture, are trimmed with red lacquer and inlaid with square wooden tiles.

Dominated by red, the central space has a long communal table, plus several two-tops and a trio of secluded banquettes towards the back.

Small to medium-sized parties are accommodated in the section to the right, where the red tones are swapped for warm creams and the wagasa patterns appear again on the wallpaper.

More banquette niches are framed by curved ceilings, and decorated with other traditional wagara motifs and imagery of performers with fans.

The final indoor dining area includes a variety of table sizes, as well as a robata grill – a specialty that the chef is “renowned for pioneering in the West” according to the team.

Meanwhile, the red-lacquered communal table is “illuminated by a custom chandelier with a lazily undulating form that appears like waves rendered in ink”. 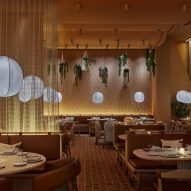 A private dining room at the end of the hall-like restaurant features red-leather-backed chairs around a circular wooden table, which seats 10.

In the warmer months, a terrace influenced by autumnal Japanese gardens will provide space for 98 guests outdoors.

Katsuya opened in March 2022 as one of two full-service restaurants inside the Citizens food hall, located within the Manhattan West development between Hudson Yards and Penn Station.

Rockwell Group was also responsible for the interior design of Citizens, as well as the other fine-dining option Casa Dani, which serves Andalusian cuisine in a setting to match.

The firm was founded by architect and designer David Rockwell in 1984, and is best known for hospitality projects, and production design for theatre and events.

Its studios have recently collaborated with fellow designers Joyce Wang on the first Equinox Hotel, Yabu Pushelberg for the Moxy Chelsea hotel and Diller Scofidio + Renfro to build 15 Hudson Yards and The Shed – all in New York City.

The photography is courtesy of Katsuya, unless stated otherwise.