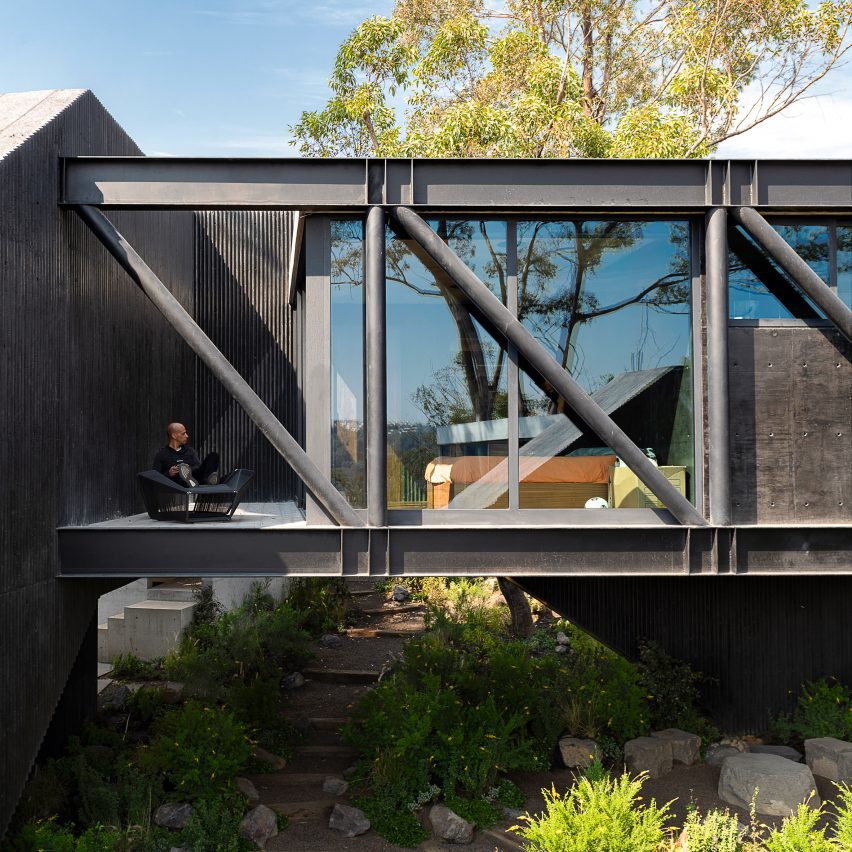 A team led by Rojkind Arquitectos has completed Casa Pasiddhi, an elevated home that winds around a plant-filled garden in Mexico‘s Hacienda de Valle Escondido.

The building is organised around a “snake-shaped” element – an elevated passageway that circles the centre of the garden.

This creates the impression that the house is largely floating above the landscape.

In fact, the arrangement is more like a series of bridges connecting the living spaces on the ground and first-floor levels.

“The concept was determined by the client’s desires for privacy, as well as the desire to live surrounded by gardens,” explained Agustin Pereyra.

Pereyra also noted that the elevated walkway was in large part an adaptation of the form to the slope of the site.

The “meandering element” encircles and shelters the garden element in the middle of the property.

The effect is emphasised by the choice of materials. While the living spaces are glazed and open, the passageway is housed within a solid volume of fluted, black concrete.

Skylights allow light to filter into the structure from above, allowing the lighting conditions inside to be more dynamic, while three staircases link it with the garden level below.

Rooms are organised into various self-contained zones. The idea was to give the family flexibility for the future, making it possible for part of the house to be separated and rented out.

The ground floor block contains a large, open-plan living room, kitchen and dining space, plus utility areas that lead onto the rear terrace. 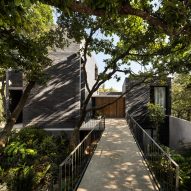 The rooftop is also accessible at the first-floor level. One of the owners, who is a certified yoga instructor, hosts classes here.

“Upon entering the house, the main garden is discovered, in which all the views and social activities of the family are centred,” said Pereyra.

“From this space you access the upper floor, where the different spaces appear discreetly along the way.”

At a time when working from home is more popular than ever, and families are increasingly demanding more flexibility from their living spaces, Pereyra believes the project can show a different approach.

“Casa Pasiddhi rethinks the way a traditional home for a close family is lived in,” he said.

“The diversity of spaces, the seclusion between them, the ability to autonomously access different areas of the house, and the confluence in the locations of coexistence – these allow us to conceive numerous methods of cohabiting, for example, when children grow up and leave their homes.”

“As one walks around Casa Pasiddhi, you can imagine the possibilities of cohabitation,” he added.

Casa Pasiddhi is among a handful of residential projects that Rojkind Arquitectos has produced since architect Michel Rojkind founded the studio in 2002. Others include a stone house Amanali.

The photography is by Jaime Navarro.