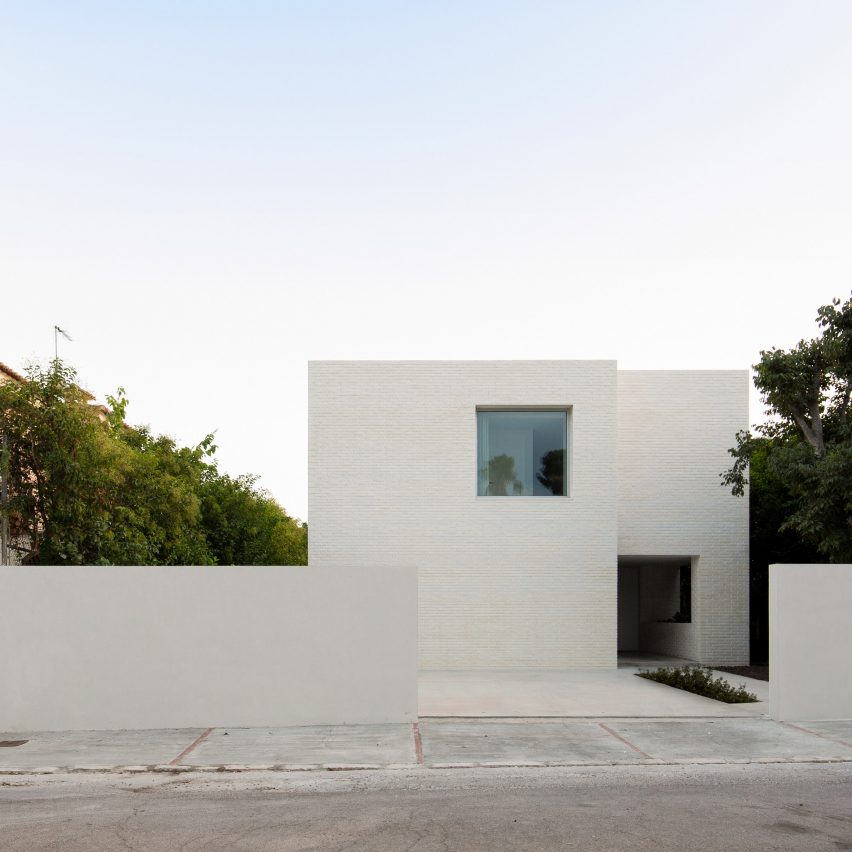 Spanish practice Sanchis Olivares used white clay bricks for this home in the suburbs of Valencia, which features an outdoor food preparation area and oven for cooking the city’s regional dish, paella.

The dwelling, named Brick House, occupies a long, narrow site near the city of La Eliana that was formerly used as a tennis court and is sheltered by trees around its perimeter.

Organised along a central “spine”, the home is wrapped by minimal, white brick walls, enclosing certain areas of the home. Others are opened up with courtyards, low benches and countertops that aim to create “human-scaled” communal areas.

“The lack of collective life in the streets of this urban model leads us to a typology that looks inwards, protecting and enclosing the exterior space in search of the user’s relationship with it,” explained the practice.

“On the east facade there are openings, gaps and a courtyard that allow morning light to enter the rooms, while on the western side there is a flat, opaque facade that seeks shelter from the sun under the surrounding vegetation,” it continued.

“The size of each [brick] allows us to approximate the volumetric forcefulness that defines the exterior image of the project to the human scale.”

Entry to the home is via a deep, sheltered cut-out in its facade, leading to the main en-suite bedroom and study and two further bedrooms on the first floor, which overlook the street through a single square window.

A central corridor runs through the home from north to south, linking the more private areas at the front of the home to a large, L-shaped living, dining and kitchen area at the rear and allowing air to circulate through the space. 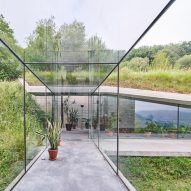 Sliding glass doors connect this space to a concrete patio with a swimming pool, outdoor shower and a paellero – an outdoor cooking space sheltered from the southern sun by a pergola built from pine slats.

The tall white chimney of this outdoor oven creates a focal point in the garden of the home, rising alongside a low section of wall that creates a bar and preparation area next to a seating area.

“[The home] culminates in the vertical element that shapes the paellero, a key element in Valencian social life,” said the practice.

The simplicity of the exterior is carried through to the interiors, with pale wooden floors, white walls and concealed storage framing deep-set windows and doors.

The photography is by Álvaro Olivares.