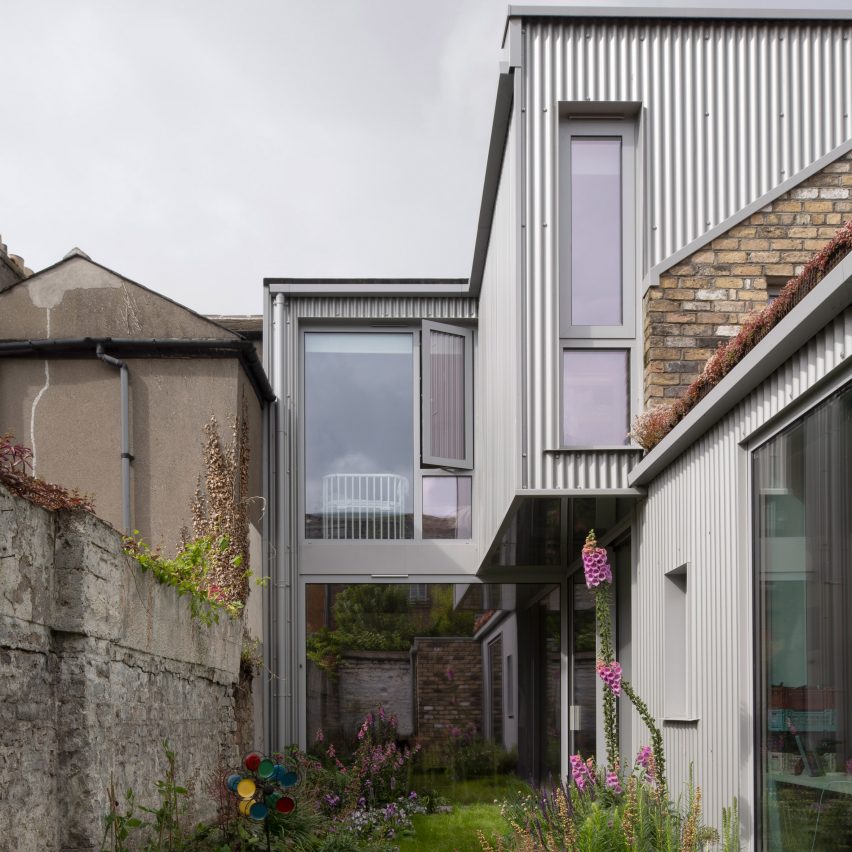 Irish studio Scullion Architects has expanded a home in Dublin, Ireland, retaining the remnants of previous extensions and contrasting them with corrugated metal-clad forms.

The two-bedroom terraced cottage, located north of Dublin’s centre, had been subject to former extensions that were left to decay over the years. Scullion Architects adopted an approach of only demolishing elements that were unable to be restored.

Opening up the centre of the plot, a new two-storey form has been inserted “like a ship in a bottle” between two areas of existing structure.

These two areas now house a reception room at the front and a garden studio at the rear that is topped by a green roof.

Silvery-grey corrugated metal has been used to clad the additions, while the soffit of a small first-floor overhang has been finished in shiny metal that reflects the garden below.

“The new materials outside are machined, metallic and reflective,” said the studio.

“This draws the beauty out of the ad-hoc disorder of the surrounding Dublin inner-city backlands,” Scullion Architects continued.

“Contrasting material oppositions of sharp versus rough seek to reclaim the now maligned technique of contrast as a means of heightening the presence of place.”

A living, dining and kitchen forms the new heart of the home. Here, old and new meet with an existing brick wall and fireplace overlooking the garden through a metal-framed glazed wall.

A skylight sits above the seating area and dining table, and a run of kitchen counters along the opposite wall is finished in wood and terrazzo. 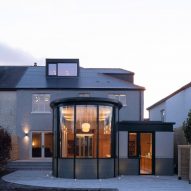 Above, two bedrooms overlook the garden through large windows, while the bathroom features a fully-glazed wall in the shower that frames a section of the old wall.

These upper rooms are organised around a small landing area, where an additional skylight above the staircase draws natural light into the centre of the home.

“Two centrally located rooftop light-wells penetrate the upper floor, drawing in sun from above, providing shafts of light into the middle of the house, and offering borrowed natural light to the upstairs bathroom,” said the studio.

In the new interiors, colourful tiling demarcates the entrance hall and kitchen, while plywood carpentry has been used to finish both the staircase and a new built-in shelving unit in the living room that conceals a pocket door.

Based in Dublin, Scullion Architects was founded by Declan Scullion in 2016.

Previous projects by the practice include a curved glass extension to a 1930s home in Dublin’s suburbs and the renovation and extension of a terraced Victorian house around a plant-filled courtyard.

The photography is by Fionn Mccann.