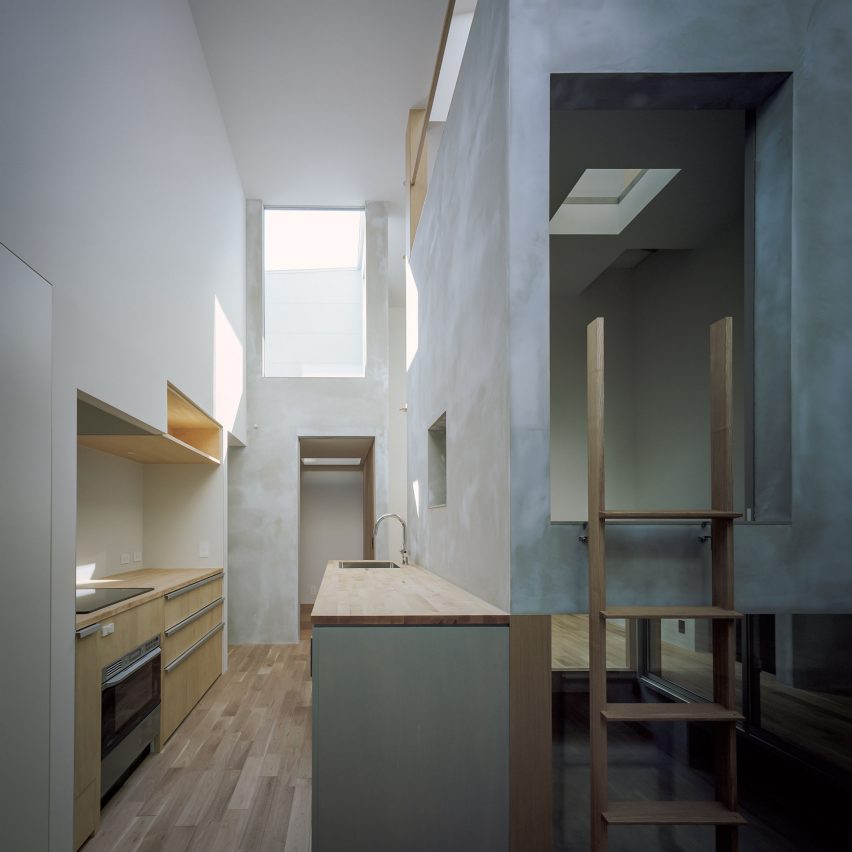 Five cement-clad boxes illuminated from above are hidden within this almost windowless house in Japan’s Hyogo prefecture, designed by FujiwaraMuro Architects.

House with a Light Void is located on a site surrounded by residential streets on three sides and a lack of captivating views.

To appease privacy-conscious clients, Japanese architecture firm FujiwaraMuro Architects chose to draw daylight into the 85-square-metre building primarily via a series of skylights.

These are positioned over vertical volumes at the home’s centre and four corners, all finished in cement plaster on the interior.

Privacy concerns are common among homeowners in Japan’s densely populated cities and suburbs, and an absence of street-facing windows is not unheard of in new buildings – 10 examples are collected here.

The entrance to the house is through a wooden door recessed into the north facade of the white-clad volume, into a circulation space that rings the central volume.

To one side is the main living area and to the other a small kitchen. The dining room is tucked at the back beside a wooden staircase.

The cement-plaster volumes themselves contain three bedrooms and a closet on the ground floor, while the tower in the middle holds a stack of multi-purpose rooms offset in level from the rest of the building.

At the bottom is a sunken space accessed by a sliding glass pane, followed by another flexible room reached by a wooden ladder above.

Glazed openings in the middle of each floor allow light to travel all the way down from the larger roof window overhead.

The second storey wraps around the internal perimeter of the rectangular building, leaving gaps around the central volume to form partial double-height spaces.

Stairs land in a linear bathroom, with a sink, shower and toilet at one end, and an enclosed room housing a tub at the other. Doors open onto a balcony that takes the remainder of this level, enclosed by the tall exterior walls along its edges.

Two small glazed windows on the upper floor provide extra light for the bathroom, while an additional open aperture along the opposite facade offers a lookout point from the balcony onto the neighbourhood.

Founded in 2002 by Shintaro Fujiwara and Yoshio Muro, FujiwaraMuro Architects is prolific across its home country, having completed imaginative private houses in several cities and prefectures.

Some of the studio’s most unique residences include a building fronted by huge vertical louvres and a dwelling that is only 2.5 metres wide.

Photography is by Katsuya Taira.

The post Skylights replace windows at House with a Light Void by FujiwaraMuro Architects appeared first on Dezeen.