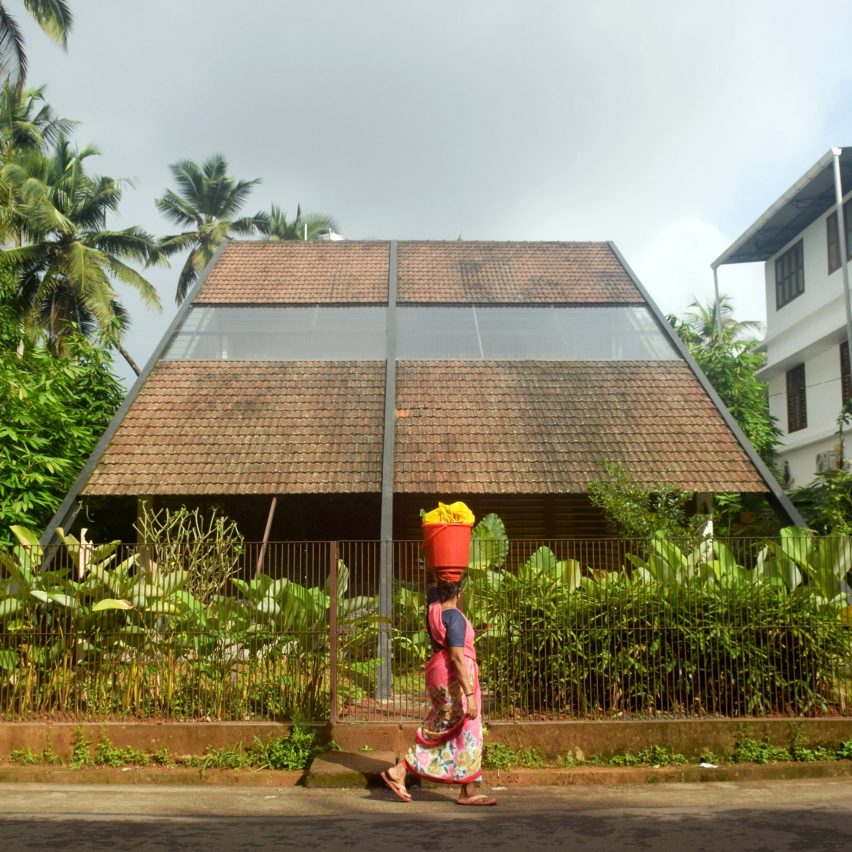 Architecture studio 3dor Concepts used a giant sloping roof to cover all three levels of this house in Kerala, India, which features an internal courtyard garden that can be opened up to the outdoors.

Named House of Noufal, the dwelling was designed by Kanpur-based studio 3dor Concepts for a client who is an avid traveller and wanted his family home to reflect his open mindset and curiosity.

The project is located in the Kannur district in the north of India, which has a wet maritime climate with heavy rain during the monsoon season and hot summer days.

While striving to be unique, the House of Noufal’s design also incorporates features evoking the region’s vernacular buildings to ensure it is suited to the climate.

“One notable requirement was that the house should be unique and weird at the same time, and full of surprises,” said the studio.

“We started with an idea to design the house by stirring modern architecture with traditional Kerala architecture, a proper climatically responsive tropical house.”

The roof of the House of Noufal slopes down to touch the ground on the front elevation, sheltering it from heavy rain and strong sunlight while giving it a distinctive appearance.

Its tiled surface is interrupted by a full-width opening that allows daylight to pour into a double-height courtyard inside containing large boulders, pebbles and plants. 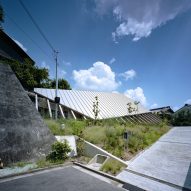 The courtyard separates the main living spaces at the front of the house from more private areas including the bedrooms and a kitchen towards the rear.

Large openings on the ground floor, including full-height operable glass walls at either end of the courtyard, connect the interior with the garden and allow breezes to naturally ventilate it.

Across the pebble garden, a path links the kitchen with a dining area and lounge featuring a bench suspended between two columns. Seating areas face the courtyard, making it the focal point of the home.

A set of minimal metal stairs with open treads connects the house’s three levels, which follow the slope of the roof. Open balustrades and screens maintain a visual connection between the spaces on each floor.

House of Noufal has a steel framework that supports the roof made of locally sourced tiles. Openings with wooden louvres on the external and internal walls are in the traditional Kerala style.

3dor Concepts was founded in 2013 by architects Muhammed Jiyad CP, Ahmed Thaneem Abdul Majeed and Muhammed Naseem M. Its previous projects include a house in the town of Taliparamba that features walls, windows and furniture with curved edges.

The photography is by SyamSreesylam.