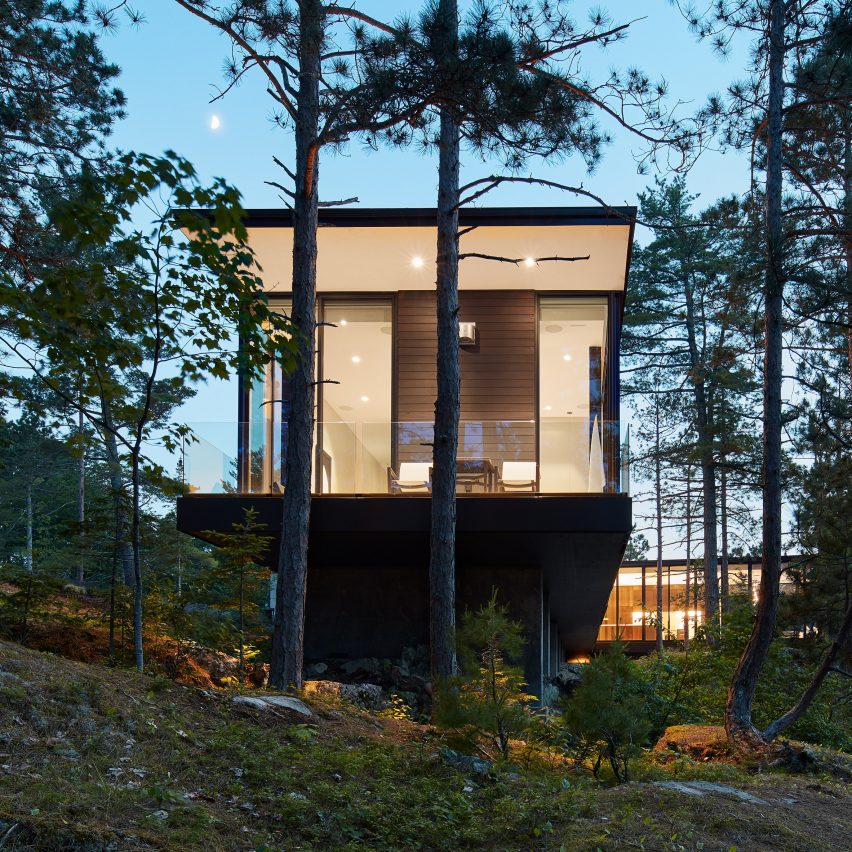 The two wings of this house on the shores of Michigan‘s Lake Superior intersect at an irregular angle, offering a variety of views of the surrounding forest and waterfront.

Named X-House after its layout, the home was conceived by Minneapolis-based firm Snow Kreilich as an isolated retreat for a large family that had been coming to a nearby property for several years.

The site is perched on the shores of Lake Superior, near the city of Marquette, Michigan. “It is adjacent to a property that had been in their family for years, a multi-generational cabin along the south shore of Lake Superior, on Michigan’s Upper Peninsula,” said Snow Kreilich.

“Remembering long summers spent on the shore, our clients wanted a legacy home for themselves and their children – similar to the family cabin, more comfortable and convenient, but just as enduring,” the team added.

The contemporary black cabin is laid out on a single level. This keeps the building’s profile from protruding above the surrounding pine trees, while also considering the owner’s future needs as their mobility diminishes.

One of the wings is for communal functions, while the other accommodates three bedrooms. The entrance is at the intersection of both volumes, and offers a glimpse of the expansive living area.

“The house sits on a rocky promontory between two coves with sandy beaches,” said Snow Kreilich.

“Two intersecting bars of the house balance on the promontory, cantilevering toward the water and into the forest, creating captured landscapes and embedding its occupants in the landscape,” they added.

The open-concept kitchen, living and dining area is wrapped with full-height glass panels on three sides. As the site slopes down towards the lake, the building becomes raised above the ground.

A terrace runs along this volume overlooking the lake and offering an outdoor lounge area that connects to the living room. 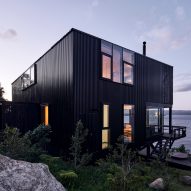 “Living spaces hover over the rocky point with large panels of glass connecting the family with the beach coves, forest and the expanses of Lake Superior,” said the architects.

In keeping with their intention of providing a more contemporary setting for the residence, the architects kept to a restrained palette of white, grey and black finishes.

Many of these material selections — such as stone accent walls and blackened wood — are used both within the home and outside, lending an impression of continuity with the natural environment.

Within the primary bedroom, Snow Kreilich included a secondary terrace, which occupies the end of the sleeping wing.

The architecture firm was founded by Julie Snow in 1995, and earned an AIA Honor Award in 2018 in recognition of its work in the US.

Other homes in Michigan include a waterfront home near is namesake lake by Wheeler Kearns Architects, and a secondary home for a Chicago family topped with deep wooden overhanging roofs.

The photography is by Gaffer Photography.